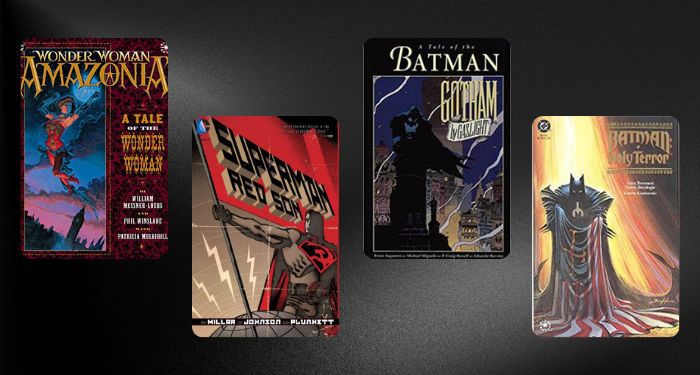 There are some comic book truisms you just can’t change. Superman is a Kryptonian orphan raised in the Midwest who grew up into a daring reporter. Batman is a broody billionaire who fights crime despite his lack of powers. Ma Hunkel is the GOAT. This is the unshakeable bedrock upon which DC Comics is built.

But what if you could change those things?

From 1989 to 2003, DC published comics under an imprint called Elseworlds, which recast familiar characters in unfamiliar situations. It’s basically sanctioned fan fiction. Ever wanted to see Batman as a medieval knight? Now you can! What would have happened if Superman was raised in the Soviet Union, or by apes, or by the Waynes? Elseworlds will tell you all these things and more. And those are just the relatively normal stories. There are apparently also comics where Lobo is a secret agent, Batman squares off against Lovecraftian creatures, and Marvel characters come for a visit.

(If you’re a fan of the Arrowverse, you’ve likely heard the name “Elseworlds” before, as it was borrowed for the 2018 crossover event spanning several CW shows. If you’re a Marvel fan, you may notice this all sounds very much like What If…?, first published in 1977. However, What If…? is a contiguous series while Elseworlds are individual one-shots or miniseries, making it more akin to Marvel miniseries like Marvel 1602 or 1872.)

The first Elseworlds tale was Gotham by Gaslight (1989), which pitted a Victorian-era Batman against Jack the Ripper. Readers got to see how Batman would cope against one of history’s most notorious criminals without the aid of his hi-tech gadgets, and how well his noirish vibes fit in with the darker (both literally and figuratively) world of the 1880s.

Other notable Elseworlds entries include:

Holy Terror‘s claim to fame is that it is the first comic to officially have the “Elseworlds” name attached (it was added to Gotham by Gaslight retroactively). The others have garnered various spinoffs and adaptations to other media. However, there are plenty of more obscure tales, including Batman: Masque, which is a Phantom of the Opera AU, and Teen Titans: The Lost Annual, which pays homage to the Silver Age with a bugged-out plot in which President Kennedy is kidnapped by aliens just in time to avoid his own assassination.

As with DC in general, Elseworlds is obsessed with Superman and Batman. While there are Elseworlds stories starring other characters — Green Lantern: Evil’s Might (2002) gave us a Victorian Green Lantern, while Wonder Woman: Amazonia (1997) gave us a Victorian Wonder Woman (do you sense a theme here?) — the overwhelming majority either revolve around or focus extensively on the World’s Finest.

Not all Elseworlds are created equal. For myself, I really enjoyed Kingdom Come and The Lost Annual. I was meh on Red Son and Batman: Thrillkiller, a noirish ’60s tale that is not actually about Batman all that much. I dimly recall being freaked out by The Doom that Came to Gotham (the Lovecraft-inspired one), which I guess is a good endorsement. And then there are series like Superman: At Earth’s End and JLA: Act of God, which have gained a reputation for being bizarre and nonsensical.

Although Elseworlds was shut down in 2003, it received the briefest of revivals in 2010 with a single story, Superman: The Last Family of Krypton, in which the entire El family sought refuge on Earth after Krypton exploded rather than shooting baby Kal into space on his own. And as I said, some of the more well-received titles have received a second life as animated films.

In short, if you like What If…? and/or you want some fan fiction with pretty art, the Elseworlds line offers plenty of options to choose from.