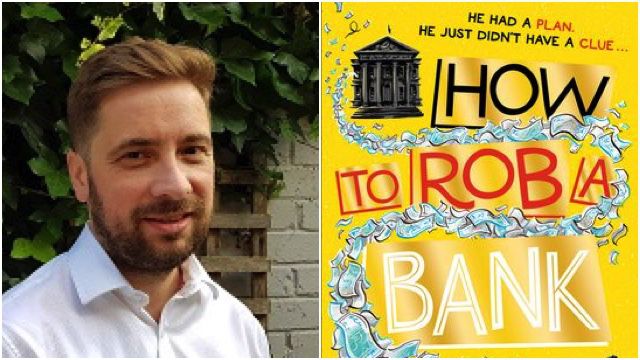 How to Rob a Bank is a story about love. Dylan is fifteen and really wants to impress the girl that he likes. What he ends up doing is the opposite of impressing her: he accidentally burns down her house. 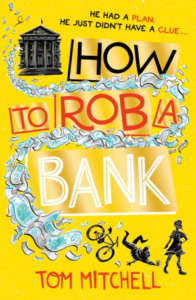 To make up for it, he decides to make a grand gesture. And what’s the best gesture he can think of? Rob a bank so that he can buy her a new home. What’s the worst that can happen?

Finding funny YA novels can sometimes be a challenge. Book Riot has a list of funny YA here.  It was great to find Tom Mitchell’s Debut How to Rob a Bank to add to the list.

It was even better that I was able to interview Tom about the novel, horrible jobs, embarrassing experiences and much more.

Lucas Maxwell: How to Rob a Bank is a hilarious story aimed at ages 11 and up. When I was that age I don’t remember there being a lot of really funny books available, did you have the same experience? What were the funny books that captured your attention at that age?

Tom Mitchell: Yes. I had exactly the same experience. I sometimes find that as a teacher, too. I remember enjoying Roald Dahl when I was younger, like everyone, but I don’t remember thinking that books, like adults, were necessarily something that could be funny. When I was a little older, I read Adrian Mole. There was a period too when I raced through PG Wodehouse. But in my earlier years of secondary school, laughter was something that happened when messing about on the fields, rather than in the library.

LM: As a Librarian who is endlessly trying to get students to connect with stories, my opinion is that boys will delve deeper into a novel if it contains a lot of humour. When you started to write How to Rob a Bank, did you know it would be a comedy or did it evolve over time?

TM: My starting point was that I didn’t want my book to teach kids an important lesson. You don’t play Red Dead Redemption to learn (cowboy) life lessons or the history of the frontier. You play it for fun. I don’t think I’d be able to write a gritty crime novel, so it had to be humour. And we all love a laugh, right? Because what’s the alternative? Kids have enough to worry about. As do adults.

LM: I think everyone at one point in their life has fantasised about how they would go about robbing a bank (unless I’m a sociopath). Why do you think readers and moviegoers have been fascinated with people who engage in this kind of criminal activity for decades?

TM: Yes! I worry about saying this for fear of people thinking I’m a secret criminal. Maybe we should blame Hollywood. My mum would. Some of the best films (and video games) involve heists. I guess it’s the glamour of executing the perfect plan married to ending up with loads of money. Who wouldn’t want an afternoon’s work to set them up for the rest of their lives? It’s Plato’s idea for an invisibility cloak – if you knew for sure that you’d get away with a crime, there’d be no hesitation in committing it. Maybe a slightly negative view of humanity, but there we go.

LM: At the heart of it, How to Rob a Bank is about a boy trying to impress a girl with a gesture that goes horribly wrong. Do you have a story you’re willing to share about trying to impress someone and having it blow up in your face?

TM: Wow. I mean this is a constant scenario throughout my life. I’ve never been the leading man, always the quirky friend. I remember cooking a dinner for a date once. I’d prepared spaghetti bolognese from a jar (which, looking back, was a bit underwhelming). I caught my sleeve on the hob and it went up in flames with a whoosh. I screamed. My potential girlfriend came running. I made like it was nothing. I ate the meal in agony, with only one sleeve. I never saw her again. (There’s a fire in the book – I’ve only just realised now that there may be a potential subconscious link.)

LM: What do you hope your readers will take away from How to Rob a Bank?

TM: Crime doesn’t pay? Life is fun? Being a teenager is both tragic and comic, uplifting and depressing? That Orpington isn’t as bad as everyone makes out? Honestly, I’ll be happy if people read it. I’ll be delighted if they enjoy it.

LM: How to Rob a Bank has been compared to Ferris Bueller & a heist film. Ferris Bueller’s Day Off was a very important film for me for several reasons. What were the films that shaped your comedic or artistic voice?

TM: Much like Dylan in the book, my dad introduced me to loads of amazing films. I remember the sheer joy of watching Indiana Jones with him. It’s difficult to recapture that sense of awe the older you get. Office Space is very funny – ordinary people in extraordinary circumstances. That’s what I like. Just surprise me.

LM: How to Rob a Bank is cinematic in its scope. Do you have a favourite film that has been adapted from a novel?

TM: Does The Godfather count? No Country for Old Men is a masterful piece of work. I think There Will Be Blood was adapted from a novel. I very much enjoyed that film too. Obviously, none of these are very funny. Maybe a few gags would have bagged There Will Be Blood best picture at the Oscars?

LM: In How to Rob a Bank, Dylan has a Saturday job that he isn’t too fond of. What’s the worst job you’ve ever had to endure as a young teen?

TM: I worked as a groundskeeper at my old school, after I’d left. Once, not concentrating when filling up the petrol tank of a lawnmower, I spilt petrol everywhere. It had yet to evaporate when I yanked the pull string. There came an explosion – a tiny mushroom cloud – and I was thrown backwards. My face was blackened and my eyebrows were singed off. I also drove a tractor into one of the maintenance huts. Later, I worked in a popular fast food restaurant and they wouldn’t let me do anything but sweep the floor because I couldn’t be bothered to study for the exam which would have given me a gold star and a 5p raise. You had the learn the optimal frying temperature for chips, stuff like that.

LM: Is there a novel you wish you had read as a young teen, something you came across later in life but felt it was more suitable to a younger version of yourself?

TM: I love Holes by Louis Sachar. It’s got such a great voice and plot and it’s funny. I would have loved that as a kid. Ian McEwan wrote a book for kids called The Daydreamer. It’s about…a boy who daydreams, creating fantastic situations for himself and causing (real life) problems. I would have enjoyed reading that. I would have seen myself in the lead character.

LM: Last question, I ask this of every author I interview. You’ve been sucked into the television for some reason. You get to choose which TV family to live with but the catch is you have to live with them…forever! Which family do you choose?!

TM: The first thought that came to mind were The Bluths from Arrested Development but, on reflection, that might end up being more annoying than funny. In keeping with the crime theme, the Sopranos would keep you on your toes. I get the sense that New Jersey is a lot like Orpington too. Fuhgeddaboudit, I’d say, fuhgeddaboudit.

LM: Thanks very much for allowing me to interview you today!