Scientists say you have to try a food you don’t like several times before you acquire the taste for it. I’ve always wondered if the same holds true for books. There are countless books to which I have been indifferent or dismissive. There are dozens of works of which I’ve been critical. But there are only a handful of books toward which I have been openly hostile. When I was in high school, I was required to read John Knowles, A Separate Peace. 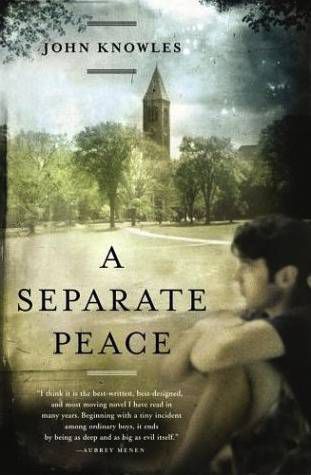 A quick recap. Set in a New England-esque prep school during WWII, Gene Forrester and Phineas are roommates and close friends, despite their polar opposite personalities. Gene is intellectual, guarded, and introverted, while Phineas (Finny) can be characterized as larger than life and supremely athletic (a trait he wears with pride). Over the summer, the two create a daring secret society, the initiation into which requires members to jump into the river from a very tall tree. Driven by envy at Phineas’ charisma and athletic talent, Gene impulsively jostles the tree while he and Phineas are standing on a tall branch, causing Finny to fall and shatter his leg. Everyone considers the fall an accident, especially given the seemingly close camaraderie between the two roommates. After Finny is told his athletic aspirations are over, Gene is racked with guilt and confesses his crime to Finny, who refuses to believe him. When the fall term begins, Gene’s inner anguish coupled with the effects of WWII on the students leads to an unfolding of events that I won’t detail here, (because I want you to read the book!) but that provoke a range of emotions, moral questions, and sympathies.

This is the first book, compulsory reading or otherwise, that I remember truly despising. I thought it bland and elitist, and I never took anything meaningful away from it.

Ten years later, I came across it on my bookshelf during one of my many relocations and decided to re-read it. Long story short, it’s now one of my favorite books. I adore it so much that I reread it every autumn during the back-to-school frenzy, and have made a tradition of reacquainting myself with Gene and Phineas while sitting outside in the crisp fall air drinking pumpkin spiced lattes. (I’m really into literary ambiance.)

Something about this book not only transports me back to my beloved New England, but also embroils me in the emotional complexity that characterizes one’s teenage years. You would think that reading this novel as a teenager would have resonated deeply when I was initially forced to examine it. However, it took reading it as an adult to appreciate the nuances of each character and his evolution as the plot progressed. Perhaps I was too immature intellectually or emotionally to appreciate the narrative. Or it could be that as an adult, I was in the right mindset to open myself up to the story. Maybe I was just curious as to why I hated this book so much to begin with. Regardless of what prompted me to give it another go, doing so encouraged me to open my mind to re-reading books I previously reviled.

I can’t say every attempt has been met with success. In fact, after re-reading J.D. Salinger’s Catcher in the Rye, (another high school book I detested,) my initial sentiments were only reaffirmed. Holden Caulfield’s crass, entitled persona aside, my ultra-nerdy high school self that matured into a super nerdy adult was (and remains) aghast at how carelessly he threw away his educational opportunities at a prestigious private school. I suppose I’ve never gotten over it.

You can’t love them all, I guess.