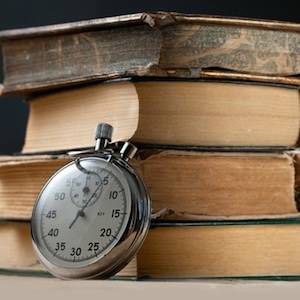 If there are two things I love outside of reading, it’s tea and fried chicken. If there are three things, though, it’s tea, fried chicken, and gadgetry. I love weird devices and alternate methods of doing normal activities. I theorize it’s the part of my brain which is patiently waiting for the Star Trek future to hurry up and arrive finding ways to occupy itself in the meantime.

All of this means that I am an absolute sucker for speed-reading. All of those courses and slightly sketchy ads promising that I’ll be able to blur through books in mere hours, the pages flipping through my fingers like I’m a cartoon character. I know it’s dumb, they never work…and moreover, I don’t need or actually want it. I like my reading speed. And my reading speed is quite fast on its own, in fact. Still, I’m a sucker.

So when reading apps began appearing, I was all over them. The latest I’ve encountered is ReadQuick, an iPhone app which was free for a bit. The idea of the app is, you plug articles into it from various places on the internet, and it feeds you to them a single word at a time, the words flashing on the screen at varying speeds, depending on how fast you set it. It can go from 50 words per minute, to a fairly soul-destroying 1000 words per minute. The idea is that flashing one word at a time stops you from “verbalizing” the words in your mind (kind of reading out loud in your head) (a completely baffling topic I have explored before) and so you read faster.

To explore this, I’ve chosen a very specific range of articles to plug in, and I’m going to read them and report with each as I go along. Let’s get kraken.

Why I Chose It: Book Riot articles tend to be very informal pieces, most of them. They have a lot of narrative flow to them, and a strong sense of voice about them. In a lot of ways, they’re someone speaking directly to you.

Results: Miserable. Possibly too fast, but much slower and there wouldn’t be any point to me using a program. I can just read the actual article at full-speed. I got the entire content of Amanda’s excellent piece, but no sense of it in my head, if you see what I mean. I don’t know where paragraphs fell, and you lose a LOT of the sense of voice and rhythm. Possibly all of it. It wasn’t particularly a humorous article, but if it had been (humor being even more dependent on rhythm and voice), I don’t think it would’ve been funny. So here, I got the gist, the facts, and none of the flavor and style.

Why I Chose It: New Yorker profiles are a very specific form of writing, a sort of interview and character sketch buried inside a piece of narrative journalism. Again, as above, a lot of voice and narrative flow. It isn’t as straightforward as a simple interview. They’re also long as hell.

Results: Horrible. Really problematic. For one thing, I discovered that when you get into a really lengthy piece, your attention cannot help but wander a little, particularly when it’s just one word at a time. Another problem was that if you get interrupted by anything that pulls your attention away, the article will continue unrolling ’til you pause…but also, you’ll mentally lose the rhythm of the piece and lose track of it. At least, that’s what happened to me. I had to pause to answer a text message (a not unreasonable interruption, somewhere in the space of a 20 minute article). I discovered when I came back that I had really lost track of what I had just read. I also discovered that reading one-word-at-a-time for that long left me slightly nauseous when I finished (a rarity: nothing but Jagermeister leaves me nauseous). I think there are both form and time limits on this kind of app.

Why I Chose It: Video-game reviews can have voice and rhythm too, but are mainly about delivering information and a verdict, and it seems to me that a mechanical results-driven document like that might work pretty well with the app.

Results: I was right, this came off like a dream. I can see standing in a store, blurring through a review with this app, enough to get the gist of if I should buy the game or not…or even figure out if I need to read more reviews or not. Granted, a review has some of the rhythm and voice of the other articles, but it takes a back seat and the app shines here.

Fiction: Paladin of the Lost Hour, by Harlan Ellison

Why I Chose It: Fiction is so much rhythm and voice, I suspect this’ll fall apart. I chose this particular Harlan Ellison story because it was longer, it had a lot of dialog-only sections (which I wanted to experiment with) and also because I had read it before. All the others, I’ve chosen unread or not-read-recently. This one, I am completely familiar with and wanted to keep track of where I was and what I was doing a little more closely.

Results: Color me surprised. I really didn’t think, based on what I’d learned earlier, that fiction would work even slightly…so I was surprised that it kind of did. I wonder if it’s because I’d read the piece before? There was some difficulty anytime a dialog exchange happened (it was tough to keep track of who was saying what; you would have to formalize the dialog sentence structure a LOT to fix that problem, and that would be the pits). Again, though, I had the problem of getting faintly nauseous…and also, after an afternoon of staring at this app, I think my eyes are going to fall out of my head and roll away.

So there we have it. It was fun to put through its paces, as all gadgetry is. Does it help? I seriously doubt it. I don’t see how it would really increase reading speed. I can see it being vaguely useful for reading things like reviews, standing in a store aisle. On the other hand, those types of articles usually summarize themselves with a PRO and CON list, so I’m not sure you’re gaining much.

In truth, when I put away my love of gadgetry and messing with my own brain, I’m rationally not all that enamored with speed reading. It isn’t a race, and if you power through books in a state of speed and tension, what have you really gained? You aren’t gonna win at reading. I can understand the frustration of wanting to read faster, but I’ve yet to be convinced by any speed reading technique or app which promises to enhance reading speed. I suspect that even if it succeeded, it would be a very temporary boost.

Okay, a final test. What happens if I plug in a hyper-dense science article and I set the app all the way to 1000 words per minute let’s try that o–