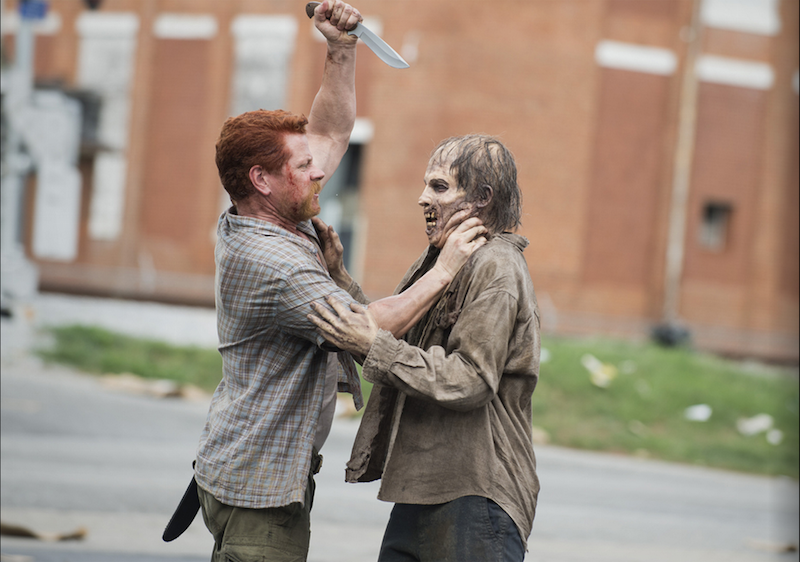 The bus heads down a leafy road. I wonder how they get so many leaves on the road? Seems like it’d be a hassle but it’s a nice effect. Haircuts are discussed at some length while Maggie and Glen pretend the rest of the group is just behind them. Eugene spouts science stuff, it’s honestly not half bad. More hair talk followed by the bus crashing horribly and landing on its side. We couldn’t get at least one full road trip episode?! Ohwell.

Flashback time, Abraham kills a supermarket full of dudes, not walkers, with a soup can and his boot which has the power to snap necks. Back in the present the gang quickly constructs a not totally terrible plan to escape the bus, how refreshing. Eugene isn’t super helpful in a fight like this, but he tries, a bit. In the aftermath, the bus goes up in smoke, along with a lot of supplies and hope for completing “the mission.” Abraham still only cares about moving forward, sans vehicle. So they move on.

Back to the flashback. Abraham calls out for Ellen, a woman and some children reveal themselves just in time for the flashback to end. Convenient, that. The group finds a library or something, Eugene, having seen Orange Is The New Black, quickly starts a fire. I really like these moments of the practical survival stuff, using coat hangers as a grill grate, catgut from book bindings to stitch wounds, etc. Typically the franticness of the crisis at the moment doesn’t allow for the quiet stuff in between, but this episode is better off for showing it.

Abraham thanks Glen for his support in continuing the trek, because again, the mission is all that matters to him. Glen takes over the watch, Abraham announces he’s going to go have sex with Rosita. Mid-coitus, Rosita sees Eugene watching, and not for the first time. Tara catches Eugene peeping, so he clinically explains to her why it’s OK, not that she asked. Eugene then apologizes for making the bus crash, which he means literally because he put glass in the fuel line. He thinks if they get to DC and he fails to solve the virus then they’ll ditch him, and he’ll die on his own. Tara, while only mildly peeved that they almost all died, assures him that they’ll stick together no matter what. Then Tara takes a peak at Eugene and Rostia, because c’mon, right?

In flashback land, Abraham tries to comfort the woman and her kids but she doesn’t look all that happy to see him. If it’s only because he’s covered in blood that’s dumb, there’s got to be a bigger reveal looming. Back at the bookstore, Rosita works on Eugene’s hand again, which I can’t help but notice is sporting a wedding band. Next item on the agenda, hijack a firetruck. Not a bad idea, really. And it even starts after two tries. At least long enough to drive forward unblocking a door that it might have been backed up against for a reason. The walkers come pouring out, a battle ensues but is ended when Eugene takes a hose to them, because this is the south after all. The hose is enough to take off heads, which I’m not sure would work but OK, why not?

Flashing back, Abraham awakens alone to find a note saying “Don’t try to find us.” Given his behavior this whole time, I’m guessing that is a big ask. In the present, the truck has broken down… again. Everyone mills about while Abraham works on the truck. If this were an episode of Top Gear, Abraham would be Clarkson and deserve his title of “the Orangutan.” Maggie tells Eugene a Bible story about Sampson, who also had a mullet. They give up on the fire truck as a stench rolls down the road, and it ain’t daisies folks. It’s easily the biggest horde the show has attempted to portray. Abraham wants to just plow through, even with a truck that is currently not running. The group has finally ad it, time to deviate from the bullheadishness. Abraham grabs Eugene and starts for the truck. There is much yelling and shoving. Eugene stops the fracas by screaming “I am not a scientist!”

He soliloquizes a bit about being just smart enough to con them into taking him to DC, where there’s probably a bunker or something. Better to die surrounded by politicians than in Houston, I suppose. Abraham, moved by his words, punches him in the face several times before Rosita intervenes. What’s Abraham to do without THE MISSION? In flashback land, having looked for the people who asked him not to, he finds them as not at all unexpected corpses, and readies himself to eat a bullet, until he hears Eugene crying for help. “I have a very important mission.” GAME ON.

This was a fine episode, exemplified by some quiet and reflective moments, but with enough progression to not stagnate. We learn some history and bring two major characters to a very different place by the end of the episode. The only disappointment is not knowing why the women and her children were so eager to get away from Abraham so they could get immediately eaten, but besides that not too shabby. But while I’m curious to see where Abraham finds his motivation to carry on, I’m more excited to get back to the hospital and find out what’s happening with Beth and now Carol , which it looks like we get to see next week!

What did you think of this week’s episode? Let us know in the comments!