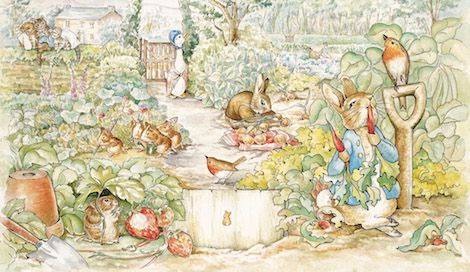 DID YOU KNOW: 16 December 1901 is the official publication birthday of The Tale of Peter Rabbit by Beatrix Potter? The very first batch consisted of 250 copies privately printed and distributed. In fact, every single one of those 250 privately printed copies is a glorious ‘flip of the bird’ to the industry that said “No”. And as much as I love Peter Rabbit and all the characters from the series, I prefer to celebrate this day as the birth of independent female writers everywhere.

Hearing the Word, “No”

The Tale of Peter Rabbit was never originally intended to be in book form. Rather, it stemmed from the entertaining letters Potter would send to Noel Moore, the ill child of her former governess. Each of the stories was inspired by her own pets, including a rabbit named Peter.

Sometime later, Potter had the idea of publishing the stories in books. And not just any books but a particular style and fashion. Potter could see, in her mind’s eye, the exact way to present these stories to children. The only problem she faced was convincing adults it was a good idea.

This was not an easy concept to present to publishing companies. Potter had already had a taste of the misogyny within academia. In 1896, Potter wrote a paper on fungi reproduction. Initially, the Royal Botanic Gardens rejected the paper. However, a year later it was accepted by the Linnean Society when presented by a male colleague but hey–this was the 1890s and apparently, women like Potter were supposed to be accustom to hearing the word “No”. Thankfully, times have been changing and in 1997, the Linnean Society issued a posthumous apology to Potter, acknowledging the sexist treatment given to Potter regarding her research and its policy toward the contributions of women.

However, Potter was still in 1897 and she was still having to listen to multiple publishing houses telling her “No”. To any aspiring writers out there, this is going to happen and it’s not always a bad thing. In fact, sometimes we need to hear the word “no” to help refine our work. However, in Potter’s case, the word “no” was more about conforming to predicted consumer behaviour and less about the book itself. Potter had a very set idea in her head as to how this book should be presented. Between this idea and her strong personality, most publishing houses deemed it too difficult.

If You Want Something Done Right, You Have to Do It Yourself

Potter always knew what she wanted, and she was never going to ‘settle’ for anything less. Fellow Rioter, LH Johnson, was spot-on when observing the branding genius of Beatrix Potter.

“As Potter herself once commented, “with opportunity, the world is very interesting.” She was a woman who realised opportunity and fought hard for the right to realise those opportunities. Her books sing with that awareness of such. Opportunities can be good or bad, but they have to happen. They have to be allowed to happen. For good, or for bad.” 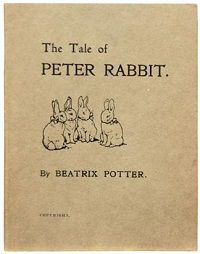 You can read more of the article here, and you should. Potter knew what she wanted and she knew she simply would have to do it herself. It wasn’t only the private printing of her beloved books; Potter prepared all 41 of the black and white woodblock gravings and the colour frontispiece. She ensured the layout was exactly how she imagined it and funded all the printing of all 250 initial copies of The Tale of Peter Rabbit. Back then, it wouldn’t have been a small amount of money. Today, that same first edition would now be worth around USD$55,500 (going from auction proceedings in 2016).

Now, if you’re reading this and thinking, “Yeah! I can self-publish my own book!” then you need to realise it doesn’t all stop with the printed copies. Potter had 250 copies of this book and she shared the cotton-tail out of it; family, friends, colleagues, strange person who was looking at her funny in the park. She even sent a copy to a few publishing houses who had previously rejected her; possibly with the added note saying, “Look, fools! THIS is what I was talking about!” Whatever she said, it worked. One of her previous rejections, Frederick Warne & Co, changed their mind and signed her up. They went on to sell 20,000 copies in the next year.

Be True to Yourself

Every year, when Peter Rabbit’s ‘birthday’ come around, I always take a moment to pause and appreciate the role model in Beatrix Potter. After so many rejections, it would have been easy for Potter to say, enough is enough and simply give in to the louder voices. Instead, Potter had an idea for what she could achieve and she stuck with it.

By the time Potter was ready to print her third small book, The Tailor of Gloucester, it was pretty well established that Potter knew what she was talking about. And yet the publishing company, Warne, wanted to make significant changes–cutting images, changing layouts and messing with the story.

Thank the bunnies, Potter remained true to herself! Potter held the idea of exactly how the book should look and self-published 500 copies, with no changes. And guess what? They were a hit. Once Warne saw her success, they came crawling back and conceded that yes, Beatrix Potter knew what she was doing. The success of the series was enough to save the struggling company.

This is the benefit of self-publishing, people. Yes, it is hard work. Yes, you will have to do the majority of that hard work yourself. But if Beatrix Potter has taught me anything, it’s that no-one is going to do the hard work if I’m not prepared to do it myself first. You have the power to follow things through, and you have the responsibility for making things happen.

Happy birthday, Peter Rabbit! Not the widely published birthday but the birthday that came from determination and self-belief and a hell of a lot of courage. That’s pretty special.