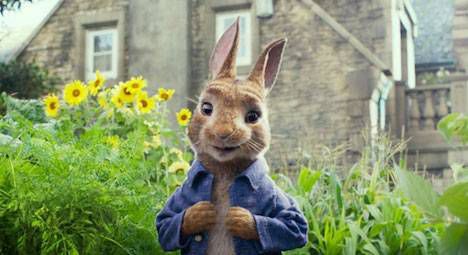 I’ve rewatched this trailer for the Peter Rabbit movie several times now and still can’t quite get over it. Due out in 2018, the Peter Rabbit film stars James Corden in the lead role, playing against the death of my faith in humanity.

And yet, I can’t quite get over the fact that Beatrix Potter might have quite approved of this Peter Rabbit movie trailer.

Potter was gifted with a very distinct eye when it came to her work. She could consider the world from a childish perspective, whether investigating the nooks and crannies in the floorboards or gleefully watching rabbits creep into a garden where they weren’t meant to be.  It was something she came to later refer to as the “seeing eye,” reflecting that:

“Thank God I have the seeing eye, that is to say, as I lie in bed I can walk step by step on the fells and rough land seeing every stone and flower and patch of bog and cotton pass where my old legs will never take me again.”

Excluded from a scientific world that she had every right and legitimacy to participate in, Potter turned towards independence, both personal and financial. She was an author who understood the power of brand. After initially self-publishing The Tale of Peter Rabbit, she turned towards licensing and merchandise, allowing her characters to be used in a variety of different circumstances and for a variety of branded gifts. She even went so far as to patent a Peter Rabbit doll of her own, following a disastrous spate of intellectual infringement in America where her publisher had failed to register the books for copyright. The patent gave her legal justification to address these.

In a way, it’s thanks to Potter that the idea of authorial merchandise exists. That Ravenclaw scarf? Or the Death Hallows pin on your coat? All thanks to Potter who not only saw, but also recognised and exploited these opportunities.

Her death didn’t stop her.  The National Trust, a charity devoted to preserving heritage sites throughout the United Kingdom, owes much of its land in the Lake District to Potter. Upon her death in 1943, she bequeathed them several thousand acres of land, fourteen farms, and her own house of Hill Top. But these gifts came with detailed caveats: Hill Top was to be laid out as Potter wanted it, even to the extent of having certain objects placed in certain rooms and not others. As Nicola Watson writes in The Literary Tourist, it’s an experience which makes the viewer “realise that to make them look more familiar you would need to shrink your viewpoint to cat or rat or goose level.”

As Potter herself once commented, “with opportunity, the world is very interesting.” She was a woman who realised opportunity and fought hard for the right to realise those opportunities. Her books sing with that awareness of such. Opportunities can be good or bad, but they have to happen. They have to be allowed to happen. For good, or for bad.

And it’s because of that, even though this trailer makes me want to bathe my eyeballs for a month, I think that Beatrix Potter might have sort of been all right with it.

What are your thoughts on the Peter Rabbit movie?