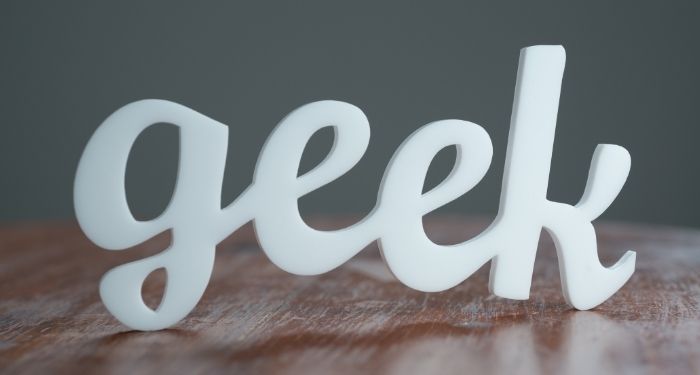 Geek. Nerd. If you grew up in the 1980s and ’90s like I did, chances are that these were not used in a nice way when thrown around. And now, suddenly, they’ve become a kind of cool. It seems like “geek” and “nerd” mean the same thing, but Dictionary.com provides the distinction. A “nerd” implies someone who is socially awkward and is smart but singularly focused on a “nonsocial” hobby or interest; whereas a “geek” is someone who’s more into digital technology, and is enthusiastic or an expert in a certain subject or activity.

I think there’s a lot of overlap between the two terms, though, and I’m not sure many people differentiate between them. I don’t even think I differentiate between them, although if I think about it, I’m probably more likely to use the term geek than nerd, though I’m not exactly sure why. I didn’t even think about this stuff until I started getting into Star Wars, about five years ago. That led me somehow to comics, and together, both of those things helped me with PPD and early motherhood. I lived and breathed comics and Star Wars for years. While I still love both, the intensity has died down a little bit because of life circumstances, but I’m still very into the SW fandom. Until I got into SW, I didn’t even think I liked science fiction/fantasy movies or books. (LOL, the shelves that are now filled with SFF would beg to differ).

But if I’m honest, maybe I was always a geek or nerd. I started school early, and loved it. I was always — always — with a book, likely two (because what if I finish one while I’m out?). When we would go out to eat when I was little, I’d bring a book and read until the food got there. I’d read in the car. I can’t remember a time when I didn’t read. Sure, I had friends and participated in activities, but I would have read 24/7 if I could. But if someone had called me a geek or nerd in elementary or middle school…ouch. Grad school was great because honestly, it’s just a bunch of people geeking out over a shared love of a field, free to do research and read to their hearts’ content. I was thrilled that my MS was housed in a medical school, because I would go to the library and check out medical books…for fun.

At some point, geeks and nerds became…cool, at least in the larger world. The Big Bang Theory was a hit show that followed a bunch of geeks. Superhero movies capture the interest of millions of people. No one looks at you askance if you mention that you play D&D. There are board books for baby geeks and baby nerds. “Geek chic” has popped up in fashion magazines, and Comic Cons are big business. There are fandoms of shows, games, music groups — the encouragement of special interests is widespread.

I know some people get salty about this, but I’m happy for the accessibility of these things and that more people are being introduced to it all. If someone finds their friend group in a weekly D&D meetup, or finds escape in the Marvel universe or empowerment in cosplaying for cons through how popular any of these things are, great. It doesn’t make them any less “authentic” or less of a fan.

The Darker Side of Geek

Although I found solace in fandoms and geeky communities, they aren’t without their problems, like any community. I was recently reading both Black Nerd Problems by William Evans and Omar Holmon, and The Geek Feminist Revolution by Kameron Hurley. While both books had their fair share of fun nerd/geekdom, they also brought up issues of representation, racism, misogyny, violence, and harassment in fandoms and geek/nerd spaces. We can — and must — still do better. Even with personal experience, if I mention to certain people that I like comics, I’m instantly peppered with questions to see if I really read comics. With Star Wars, I’ve left certain Facebook groups because of the gatekeeping, judgment of being a “real” fan or derision of what someone says they like in the galaxy, or bigoted comments about who “can” cosplay what characters. And, of course, there’s the perennial complaints of superheroes and comics becoming “woke” or full of “social justice warriors.” (Who’s gonna break it to them?)

At a time when the world can feel like a flaming garbage pile, it’s nice to have a corner of the world that you love, in which you feel comfortable. Finding people who love the quirky thing you also love can be affirming and provide much-needed connection, especially today. There’s something nice about going to one of my Facebook Star Wars book groups and seeing nothing but supportive, encouraging posts about what we all love — sharing which books to start with, good-natured discussions about canon vs. Legends, and sharing “shelfies.” Sure, there are disagreements and debates, but for the most part, it’s people nerding out about a great bookstore find, or sharing SW memorabilia that they had to have, or their thoughts after finishing a SW book.

Geeky? Nerdy? Sure! And proud of it.