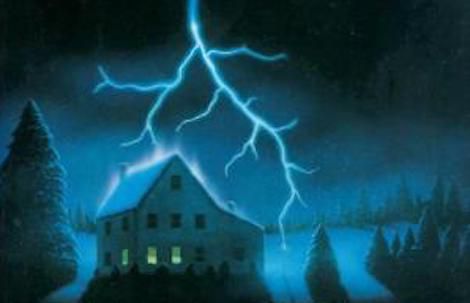 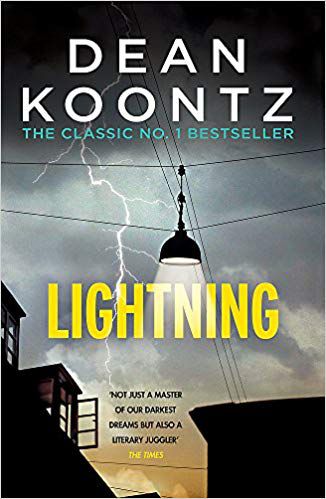 I have always described my favorite Dean Koontz book, Lightning, in the same spoiler-laden way: it’s about time-traveling Nazis. That used to be a selling point. The absurdity of it was what drew me in when I read it at 13—the surprise reveal of Nazis magically in the heroine’s midst. In this time. In my place. It sent impossible shivers down my spine.

When I was describing Lightning in that tried way this week—”time traveling Nazis! One betrays the Third Reich for love, all because of literature!”—it suddenly felt…wrong. And the more I thought about it, the more uncomfortable I became with the idea that Lightning’s premise had ever seemed okay to me.

Nazis aren’t just characters any more—you can’t dip into your villains box and pull one out to fit a bad guy spot, blithely assuming that we’ll all agree that they’re evil. Nazis aren’t even villainous figures safely confined to the past. They’re real. They’re back—across Europe and in American streets.

We have the current president, partially, to thank for that. The realities of Charlottesville and other overt displays of white supremacy make it newly uncomfortable that anyone who knows that Nazis are properly and eternally villains would ever laud a book in which one of the heroes is…a Nazi.

Mid-recommend, I acknowledged that there’s something quintessentially wrong about the way that I’ve always talked about, and enjoyed, this book. And I stopped. My old favorite is deeply problematic.

Remember way back in 2015, when white supremacists still seemed like they might be fading away, and we had a normal, feeling human in the White House? In that year, a controversy arose when Kate Breslin’s For Such a Time was nominated for a RITA Award. That problematic title had a Jewish woman falling in love with a Nazi and becoming Christian. Readers revolted—with good reason. You don’t treat the Holocaust as fodder for redemption through love and Jesus and NOT earn backlash.

Lightning doesn’t find its redemption in the Holocaust era; what’s evil about the Nazis is dimensionlessly left so, and their megalomania is used as a jumping off point to imagine an alternate timeline in which they haven’t yet lost the war. Maybe holding the past apart that way once made it feel okay to do this kind of speculation. In the early 1980s, when the book was released, it probably felt edgy—in the way that The Boys from Brazil was edgy. It was a totally improbable “what if.” What if they’d been given a little magic and a broader chance to rule the world? The chills you get are supposed to arise from the warm comfort that it’s impossible.

Still, I hesitated to follow through on my recommendation this week. The alternate timeline isn’t cover enough when you have present-day Nazis marching under the banner of “alternate right.” If you read Lightning not through the rose-colored glasses of the ’80s—when David Duke felt like a confined anomaly and not someone whom the president dog-whistlingly refused to disavow—but through the lens more now, this happens to its once-thrilling pages:

1) Stefan’s redemption story feels crass. At the beginning of the book, he’s positioned as Laura’s guardian angel. By the end, he’s revealed as a time-traveling Nazi who’s defected in search of redemption. Good god, that my mind ever jumped so easily from “angel” to “Nazi,” no matter how “sorry” he felt.

Why was I once charmed by pages in which a time-traveling Nazi met a beautiful young writer and found, in her hopeful words and ability to forgive, a second chance? Approached today: I genuinely don’t believe that Nazis are that easy to “fix”—and I have no investment in whether or not they’d choose to seek the fix. It really is this black-and-white: once you choose that side, you’re…bad. (Sorry not sorry—you killed millions of people, including half of my own. Buzz right off with your desires to enjoy sunsets and quiet evenings into your golden years.)

A guy working on behalf of white supremacists doesn’t warrant the happily ever after that Stefan gets. I once found it happy sigh–worthy that Laura ultimately decides to let him in? No longer. Girl, stay away: you’ll never be able to explain Stepdaddy’s past to your son.

2) Who wrote this? Maybe, maybe, a work of speculative fiction with an alternate timeline that finds a fresh way to end the Third Reich could be loosely entertaining if placed in the appropriate hands. I’m not sure a white, cishet, Protestant American man qualifies.

Laura Shane may be the one to have her life basically directed by Stefan*, and it may be her decision that enables him to find some measure of redemption in the end, but: the person directing her story isn’t really in a position to offer such redemption, even fictitiously. However loosely and nonviolently Stefan participates in its evil, he’s still a member of the Third Reich. If a Jewish writer wants to tackle that story line, or a Roma writer, or an LGBTQ writer: they have more room to work through resultant questions of forgiveness—whether it’s possible; whether it’s personally worth giving, all costs considered; whether a person who’s participated in that can be redeemed.

They’re heavy questions, and people whose people were not persecuted by the Third Reich (and who are not currently suffering hate speech and violence from the world’s fresh white supremacists) are eternally invited to step out of the conversation, or at least to have the decency to come down on the side of “that’s not my place.”

*2a) Laura Shane basically has her whole life directed by Stefan. That’s…not…love (why did I love this book?).

3) Ableism. There are things you don’t see when you’re reading a soapy thriller at thirteen that become all too obvious later. For example: holy crap, does this book start out by essentially suggesting that Laura’s life is less worth living if it’s lived in a wheelchair? Stefan (remember his origins, I guess) certainly seems to think so: he risks all kinds of timeline messiness to ensure that she’s able to walk. He tinkers with human history multiple times to “spare” her that.

4) Rape. To be fair, Koontz’s pedophile villain is strictly a villain. He has creepy habits and no hope of redemption in the novel, at any point. But—more and more (and, again, the sexual assailant in the White House, who goes out of his way to dismiss survivors and promote other sexual assailants to positions of power, doesn’t help here), I’m just not comfortable reading a man writing about a woman, or girl, surviving assault. We’re emptying these stories out these days to beg men to change the paradigm; something here feels like intimacy presumed.

Look: not all of these issues are inherent points against Koontz, but they ARE points worth troubling in these terribly troubled times. I’ve enjoyed reading and rereading Lightning over the years, in times when its villains seemed less immediate and its painful moments hurt on a less world-stage level. Maybe someday I’ll read and enjoy it again.

After Charlottesville, after we elected a man who bragged about assault, after we’ve suffered in solidarity through Dr. Ford’s incredibly triggering, incredibly real account of her assault, given without much hope of it actually stopping another assailant from ascending to high office: I cannot, in good conscience, honestly recommend that anyone pick up this book for fun or escape. Not any longer.

For a book club discussion on how much we missed by assuming that Nazis were villains of the past? Perhaps. For easy enjoyment? It just isn’t there, right now.

The speculative elements of Lightning have become too real. What was concealed is out in the open. I loved Lightning for so long, but I can no longer pretend that it’s non-problematic, just as I can no longer enter Koontz’s nightmares without seeing how close they are to our own.