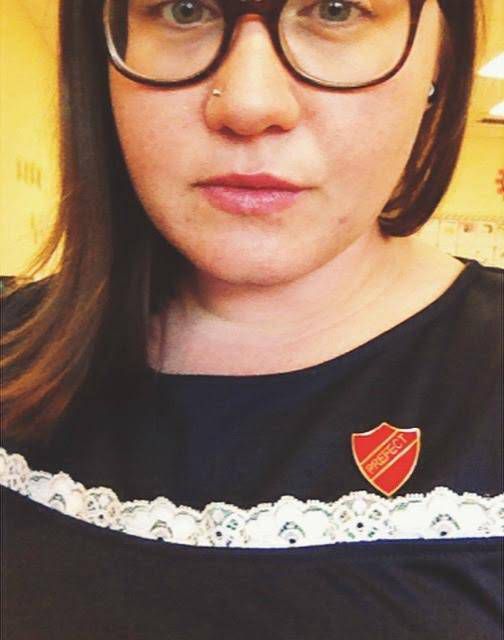 This is a guest post from Ashlie Swicker. Ashlie loves iced coffee, Leslie Knope, and YA subplots that include love triangles. Superpowers include doing voices while reading picture books, choosing the perfect Instagram filter, and oversharing. She blogs about books and women at Be Your Own Lady. Follow her on Twitter @mygirlsimple.

Books were my first friend.  Before I learned who I really was, I spent almost all my time trying to figure out who I wanted to be by burying my nose deep in the pages of someone else’s life. I grew up in the late ’80s/early ’90s, when book culture was different and my small town library sorted books into two sections: paperback and hardcover. I made my own reading list. These books were my lifeline- I depended on them for fashion advice, tips on friendship, and my only window into the terrifying world of preteen romance. If you actually had a life outside of the library in the 90s, don’t worry. I’ve preserved some of the literary wisdom of the age right here.

New York City is the coolest place on Earth. Everyone’s vacation is better than yours. -A lesson from Remember Me To Harold Square and Thames Doesn’t Rhyme with James by Paula Danziger

To this day, I still wear a different earring in each ear and the credit goes to Kendra, the sleek city girl who rolled her eyes about hosting her parents’ friends’ son for the summer…that is, until his cornfed hotness is made abundantly clear. For a girl who lived in a tiny town famous for growing mushrooms and 45 minutes away from the closest mall, reading about this couple (plus Kendra’s annoying kid brother- KENDRA, I FEEL YOU) and their adventures bopping around New York City was escapism at it’s finest. Their follow-up trip to London gave me an equal amount of wanderlust. I didn’t exactly connect with the urban, stylish, boyfriend-having Kendra, but it was fun to read a book with a main character who was so cool.

Macaroni & Cheese with coffee is a valid life choice.  You should pick a favorite sibling. -A lesson from From The Mixed Up Files of Mrs. Basil E. Frankweiler by E.L. Konigsburg

Claudia is my girl. She is a hyped up version of my indoors, library/museum seeking, oldest child self. While her adventure in getting to the bottom of the mystery of the angel statue is arguably the most interesting part of the book, I was way more into the practical details of running away with your carefully selected brother of choice.  I loved how Konigsburg explained the obsessive planning that lead to their escape- it was like Ocean’s Eleven with all the clothing-stuffed instrument cases and sitting on toilet tanks with their legs pulled up. There is a scene where Claudia reluctantly charges her brother Jamie to order the most filling foods from the diner, even if they’re not standard breakfast fare. As an adult, if I eat something lunchy but have a hot coffee with it, or end up eating non-breakfast foods in the morning, I am Claudia, fortifying myself against hunger to survive the wilds of a grown up world that, despite all my preparation, is still more uncomfortable than I’d figured.

You might have snark-power, but your trash talk is going to get around. -A lesson from Harriet the Spy by Louise Fitzhugh

I didn’t learn this lesson early enough.  Harriet is a writer, and she puts down frank and often super-rude comments about EVERYONE in her notebook. Which, of course, eventually gets lost and gets read.  By EVERYONE. I cringed reading this book. I cringe remembering it. Half because the descriptions of Harriet’s exclusion were so vivid and realistic, and half because I pulled a Harriet way too many times before I grew up and got some tact (I wasn’t cool enough to carry a notebook around, but I was nosy and found myself constantly saying the wrong thing). Harriet’s life of governesses and cooks and party-circuit parents was a far cry from mine, but I could totally relate to being ostracized in elementary school, and it was a weird relief to read about someone who had the same kind of powerfully mean thoughts that I was sure were going to send me to hell. I would really, really like to read about adult Harriet. Anybody? Please?

“You are actually not tough, brave, or bad.  You might sleep with the lights on for the next fifteen years.” -A lesson from the Goosebumps series by R. L. Stine

No one was paying attention to what I read as a kid but I still felt like I shouldn’t be allowed to check out anything by R. L. Stine. All the covers were dripping in primary colors of slime (OR BLOOD) and the suburban lives of the kids involved in the horror were too close to my own. It all seemed too possible. What if my ventriloquest dummy starts speaking on it’s own?  A just punishment for my Harriet-the-Spy-inspired thoughts! These books totally reinforced my position as a sissy, which might be the reason I rebelled in tenth grade and read the unabridged version of It by Stephen King. I am still recovering from that.