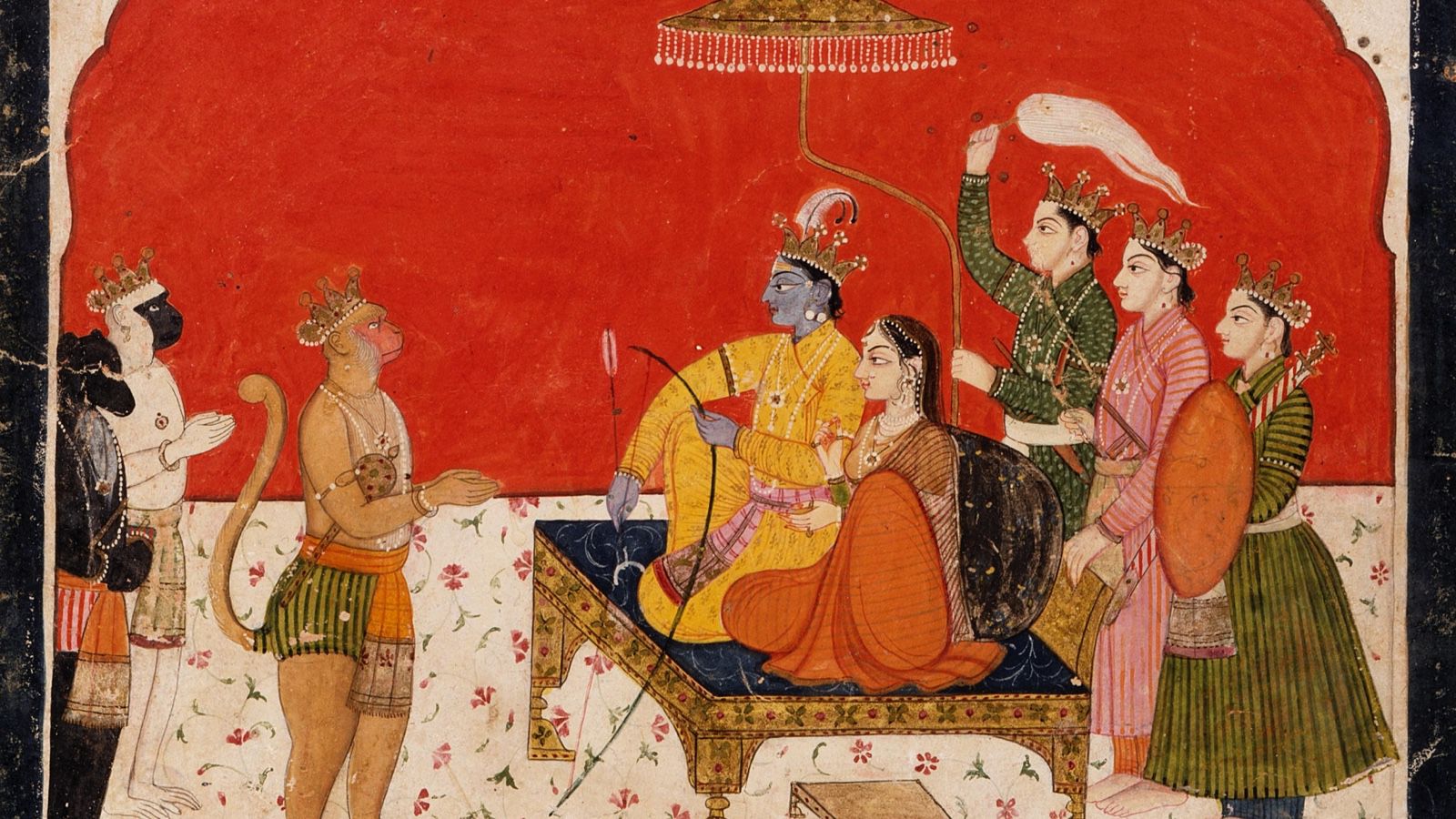 Human beings are storytellers by birth. Whether those stories are etched on the walls of ancient caves or streamed through Netflix, we just can’t resist a good tale. Some of the most important ones that have been passed down through the centuries are associated with the world’s religions. Think of the Parables in Christianity or The Ramayana in Hinduism. These stories form the basis of the belief systems for billions of human beings.

Of course, every religious story has been handed down over time, and while changes will occur through the oral tradition and various interpretations and translations, the fundamentals remain, particularly the lessons and continuity of ancient traditions. The question now is what do we call these stories, especially when they’re no longer being relayed to just people from the communities who hold these stories to be sacred. As a Hindu growing up in a predominantly Christian country, I’ve seen the sacred stories of my religion being dismissed as “mere myths” my entire life, especially when I moved to the Bible Belt.

Perhaps I am more sensitive than most, but I do take personal issue with using the term Hindu myths, rather than Hindu epics, to refer to the two key stories of the faith: The Ramayana and The Mahabharata. Note my casual use of the term story because it doesn’t have the same judgmental connotation as “myth.”

Because I’m not a classicist, I cannot provide an academic argument as to why we should avoid saying Hindu myths instead of Hindu epics, but I’ll try to give some definitions for context. I also understand that there are multiple, contradictory definitions of myths and epics. Instead, I’m going to walk through the importance of words in the modern lexicon and how they affect the manner in which modern-day readers perceive certain stories. In a world that continually values information disseminated in shorter and shorter bursts of time (I see you TikTok), explaining anything as complex as Hinduism is virtually impossible. As such, the words we use carry even more significance.

What is a Myth?

According to Encyclopædia Britannica, “Myths are specific accounts of gods or superhuman beings involved in extraordinary events or circumstances in a time that is unspecified but which is understood as existing apart from ordinary human experience. The term mythology denotes both the study of myth and the body of myths belonging to a particular religious tradition.” That overarching term “mythology” is commonly used to refer to the body of sacred stories. Merriam-Webster Collegiate Dictionary echoes Encyclopædia Britannica by defining myth as “a usually traditional story of ostensibly historical events that serves to unfold part of the world view of a people or explain a practice, belief, or natural phenomenon.”

However, in everyday speech the term myth isn’t always associated with the sacred, but rather fiction. This can be fraught when using the term myth in association with religions, which is why Robert Graves, a famed classicist, noted that a religion’s traditional stories are myths if and only if one does not belong to the religion in question. It’s all about who is speaking. In fact, Merriam-Webster Collegiate Dictionary also defines myth as “an unfounded or false notion.” Bingo. While a discerning scholar might understand that myths have a basis in historical events and encompass the sacred beliefs of a religious group, most simply see myths as fantasy.

For religious folks, someone calling their sacred stories myths can insulting because these stories aren’t myths but rather historical accounts or legends. Merriam-Webster Collegiate Dictionary defines a legend as “a story coming down from the past especially one popularly regarded as historical although not verifiable.” In other words, a legend has some sort of basis in fact, even a tenuous one.

Unlike your favorite space opera or cozy mystery, religious myths aren’t stories to consume for entertainment, at least not always. More times than not, those myths are actually considered to be legends by believers.

Now we can argue on the historical basis of religious stories, but that’s not the point here. I will note that there are plenty of scholars and religious practitioners who don’t mind calling their sacred stories myths because they see these stories as divinely inspired rather than statements of fact. But again, this is on an individual basis.

Why is that distinction between myth and legend important? Although the line between these terms is fluid and often contradictory, according to Encyclopædia Britannica, “because of the assumed link between legend and historical fact, there may be a tendency to refer to narratives that correspond to one’s own beliefs as legends, while exactly comparable stories from other traditions may be classified as myths; hence a Christian might refer to stories about the miraculous deeds of a saint as legends, while similar stories about a pagan healer might be called myths.”

For Christians, “myth” has a derogatory meaning because the term is usually understood to connote a falsehood. Even though in an academic context, stories from the Bible can be categorized as myths, culturally and socially, this is never the case. In the western world, Biblical tales are legends and of historical significance while everything else is mythology. As such, the term Christian mythology is almost never used in popular discourse.

So why is it normal to say Hindu mythology?

Hinduism in general is already exoticized by the west. Because it doesn’t neatly fit into Judeo-Christian standards of religion, many westerners view Hinduism as a confusing oddity with strange customs and practices. Even the term Hinduism is a modern construct, and some scholars argue that the modern classification is a colonial construct.

This is important to note because Hinduism has been on the world stage through the lens of the British Raj. Much of this has colonial overtones in which virtually anything associated with Hinduism is considered everything from demonic idol worship to New Age mysticism. It was a way for colonizers, such at the British and Portuguese, to stake their so-called superiority. Adding the term mythology to the mix doesn’t help.

As much as humans love telling stories, we also love classifying things (and other people). Stories are no exception. Just look at how genres such as literary fiction are given a reverence by tastemakers whereas romance and thrillers are scoffed at.

For Hindus, Lord Rama from The Ramayana is believed to be an avatar of Lord Vishnu, The Protector. As such, Rama is considered to be a hero for Hindus, and his triumphant return home is the basis for Diwali. Yet another hero comes from The Mahabharata and is named Arjuna, one of the famed Pandava brothers, whose discourse with Lord Krishna literally is The Bhagavad Gita. For Hindus, these “myths” literally translate into religious rituals, practices, and beliefs.

My grandmother used to tell me stories from both epics when I was little. And while part of this was to entertain me, it was also to educate me on ancient tales that our ancestors told each other. Even if the epics are fantastical to 21st century ears, she never suggested that they were myths because for us, they were a version of our religious truths.

This is why I like the term epic for The Ramayana and The Mahabharata. According to Encyclopædia Britannica, “Epic poetry has been and continues to be used by peoples all over the world to transmit their traditions from one generation to another, without the aid of writing. These traditions frequently consist of legendary narratives about the glorious deeds of their national heroes.”

On a technical note, both The Ramayana and The Mahabharata are poems that were transcribed by sages and have exact formatting.

On a cultural note, my grandma made it a priority to “transmit” these Hindu epics to me (i.e., “one generation to another”). Epics in particular, unlike myths, are used to educate each generation of a community so that their beliefs don’t die out.

The connotation is that myths are merely remembered whereas epics are actively told and interpreted. Epics themselves are grandiose and dignified. According to Merriam-Webster Collegiate Dictionary, an epic is “a long narrative poem in elevated style recounting the deeds of a legendary or historical hero.” The “elevated style” is key here because it’s worth remembering and even respecting. A myth, on the other hand, is cool but is something remembered rather than practiced.

While I do enjoy listening to and reading about the original epics, I also love how the format of an epic makes retellings possible without diluting the source material. Some authors have done an excellent job relaying The Ramayana and The Mahabharata to a new generation of readers, especially Indians who live in the diaspora.

For The Mahabharata, I enjoyed The Pandava Quartet by Roshani Chokshi as well as the The Palace of Illusions by Chitra Banerjee Divakaruni.

For The Ramayana, I enjoyed Asura by Anand Neelakantan and The Ram Chandra series by Amish Tripathi.

The beauty of an epic is that it can be told and retold while still staying true to its original intent. All of these retellings serve to relay the importance of Hindu epics to modern audiences and even critique and reimagine the stories for the 21st century.

So is it okay to refer to sacred Hindu stories as myths? I personally prefer to refer to them as Hindu epics. The term suggests a continuity of traditions that myths don’t.