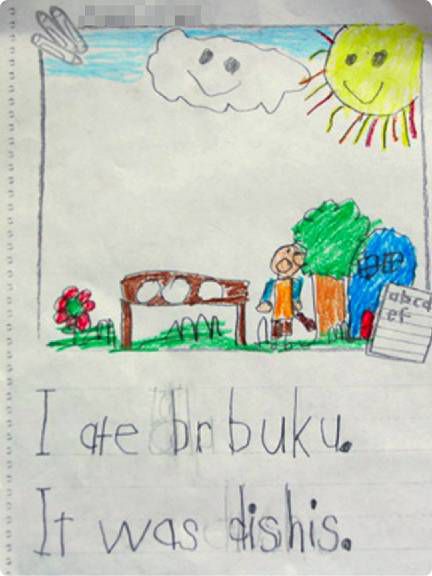 A few weeks ago I wrote a piece for Book Riot, Teaching Kids to Spell Makes You Realize How Lucky You Are, about working on English Language Arts skills with low-income elementary schoolers. Every weekday afternoon/evening, my heart is broken a dozen times over as I watch them struggle with simple spelling and basic punctuation. At the end of an hour, the kids I teach are often out of breath. They pant like they have been running at top speed. For these kids, reading and writing IS as exhausting as running for sixty minutes non-stop. My students make reading a sentence look like maneuvering through a military obstacle course. I wish they weren’t so far behind, but they are. I wish they didn’t have to work so hard to catch up, but they do. We try to deal with these grim facts with as much patience and humor as we can muster.

So that’s what’s up. Here’s what’s also up. A few weeks ago a friend of mine who tutors affluent Los Angeles middle and high schoolers told me that some of her students were educated at their private schools under the theory of “creative spelling.”

Of course I went “What? Wait. Spelling’s not creative. Spelling hasn’t been creative for centuries.”

My friend told me that creative spelling is a style of learning in which kids are allowed to experiment with spelling words and teachers/adults don’t correct misspelled words in school assignments.

So I go, “Oh, like when kids are in kindergarten? Like your teacher doesn’t yell at you about misspelling words when you’re five years old?”

And my friend tells me no, that at some of these Los Angeles private schools teachers are asked not to correct students’ spelling UNTIL THE END OF MIDDLE SCHOOL.

At this point smoke came pouring out of my nostrils and flames burst out of my ears and I turned into the dragon from the end of Sleeping Beauty.

I know this story is anecdotal, but you guys, Inventive spelling is actually a learning tool schools use. The problem is, spelling is NOT inventive, it’s not creative, you can’t put your own personal spin on words, it’s a standardized form that we use to demonstrate to the rest of the English speaking world that we have been properly educated. Like on our college applications so we can go to college. Like in cover letters and resumes so we can secure jobs. Like in emails so we can build professional and personal relationships. You need to be able to spell just… for like… MODERN LIFE.

Another major problem I have with letting kids f— around with spelling for the first nine years of their education (instead of sitting their butts down at the kitchen table and memorizing their weekly vocab words) is that the English language is NOT intuitive. The rules are in-sane. I mean, “I before E except after C and when sounding like ‘ay’ as in neighbor and weigh?” That sounds crazy because it IS crazy. We overcomplicated our written language centuries ago. That blows hard for kids learning how to spell. Well, you know what, a lot of things blow hard in life, that’s just a lesson they can learn early.

I get that these schools eventually crack down on spelling, but middle school seems WAY too late to me. All those WRONG spellings that kid memorized? That’s MEMORIZED.  If you’re a bad speller in the eighth grade, what, are you supposed to get your act together over the summer and roll into freshman year of high school rocking the roof off of literacy? No, you’re going to start high school BAD AT SPELLING, and you’re probably still going to be bad at spelling when it’s time to take the SATs and apply to college.

Apparently, the main purpose of inventive spelling is to preserve the self-esteem of students. I guess…the idea is… it will hurt their feelings too much… if adults tell them… that they spelled a word wrong? No, I do not accept this. I have to call shenanigans on this touchy-feeliness so hard. Do we even REMEMBER pioneer times where kids had to milk cows at four in the morning and then walk five miles to school in the snow and then every once in a while they would get typhoid? Am I the only one here who played Oregon Trail growing up? Kids are CAPABLE. They are resilient motherbuggers. They can survive scary diseases and harsh elements. Not that they SHOULD. But they CAN. I think they can handle being told they didn’t use the right version of “your” in a sentence without having to work it out in psychotherapy years later.

I’m pretty live-and-let-live about a lot of child-rearing issues. I don’t care if your kids sleep in your bed or whether they were breast or bottle fed. Literacy is where I stop live-and-let-living. Kids need be able to read, and they need to be able to write. There is a limited window of time we have to get kids solid with English (and math and science and foreign languages). After that window closes, it is VERY hard to crack that window back open. I know firsthand, I try to crack those windows open for my students every afternoon of my life.

If someone can show me cold, hard proof that there is educational value in inventive spelling (Google searching turned up, surprise, surprise, nothing) I’m willing to reconsider my stance.

You’ve got to have a great argument, though, because from where I stand inventive spelling just feels like inventive bullsh–.