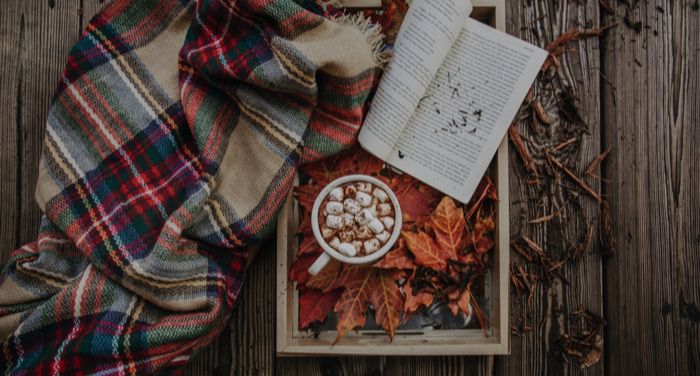 Gosh, I love fall. From the book stacks to the hypnotizing smells of apple and cinnamon drifting on the air, to the crunch of leaves under my comfy black boots as I read and walk around the neighborhood, I love this season.

Some years, I’ve collected the best leaves in my journal, trying (and usually failing) to preserve them. I have a slightly out-of-control collection of giant scarves. I admit I’m not a pumpkin fan (blasphemy, I know), but the crisp scent of fall always transports me straight back to my soccer days. Autumn, for me, is all sharp apple cider, watching football, beers late at night with friends, crisp breezy nights by the lake, and Halloween brainstorming.

But there’s a question lurking under all our love for this season, and it is: How do you know the perfect novel to read this Autumn? The perfect book to curl up with under some red and gold trees, or to read outside a café as you sip your pumpkin spice latte, or to read in your Scarlet Witch costume as you make your way to a lil Halloween party on the train?

The answer is simple: I’m gonna tell you exactly which book to preorder. Exactly which book this fall to have waiting on your library hold list. The books are historical fiction and literary, contemporary and surreal. Some are fun releases from exciting debut authors, while others are by big-name authors coming out with their newest story. And each of these books come out between late September and early December.

So here’s a quiz that will tell you a fantastic upcoming novel to buy or preorder asap.

Young Turkish American Sibel plans to spend her summer in Istanbul grieving the death of her father and studying, but instead, she finds herself self-diagnosing and distracted by her blonde American boyfriend and her grandmother. She dives into family history and searches for cures, trying to find healing however she can.

This is the highly anticipated, new epic novel from the author of All the Light We Cannot See. The story of Aethon, who wants to be turned into a bird so that he can fly to a utopian paradise, is read by a young teenage girl in Constantinople, by an octogenarian in Idaho, and by Konstance, a girl on interstellar ship Argos.

The Days of Afrekete by Asali Solomon (October 19)

In this Mrs Dalloway–esque novel, Liselle Belmont is planning a party. Her husband just lost his election for state legislature, and now she’s lost in uncertainty. Meanwhile, her ex-girlfriend Selena is trying to get through a day as the world’s dark news seems to pummel her from all sides. The two women were once everything to each other — the book unspools their stories.

Pulitzer Prize–winning author Richard Powers is out with a new novel, where an astrobiologist named Theo Byrne searches for life off earth while raising his son Robin. As his troubled son struggles, Theo is introduced to a strange new technological therapy. Powers’s book is intimate, moving, and focuses on the natural world and an incredible, protective love.

The Sentence by Louise Erdrich (November 9)

Award-winning author Erdrich writes a novel about a small Minneapolis bookstore haunted by an infuriating customer. Bookseller Tookie, who landed her job after being incarcerated for years, has to try and solve the mystery of why Flora won’t leave the bookstore — all while she confronts the tumultuous world outside in 2019–2020 Minneapolis.

As you might be able to tell from the amazing title, this book has a hefty sense of humor. The tenured professor protagonist is struggling with postpartum depression as she leaves for a speaking engagement in the Mojave Desert. She grew up in this scenery, and the ghosts of her past begin to confront her, as she tries to find her way.

Beasts of a Little Land by Juhea Kim (December 7)

You seem like someone who’s going to appreciate a good ol’ historical fiction epic. We start with a local hunter and a young Japanese officer in 1917 in the mountains of occupied Korea; we sweep through the years into the Korean independence movement, as orphan boy JungHo and young girl Jade become close friends, their fates quickly entwined.

The Perishing by Natashia Deón (November 2)

In 1930s Depression-era Los Angeles, a Black girl named Lou wakes up in an alley with no memory of how she got there. Years later, a journalist at the LA Times, she runs into a firefighter whose face she’s been drawing since she was young. Certain that their paths have crossed in a previous life, she sets out to investigate the mystery of who she is — and why.