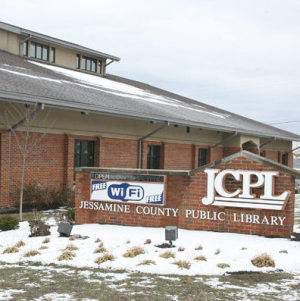 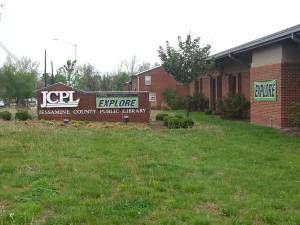 The Jessamine Co. Public Library has more than 40,000 registered borrowers, which is roughly equal to the county’s entire population.

There was a big one hanging above the shelves where the DVDs were, little ones posted on the entrance and exit doors, and a blinking electronic one behind the checkout desk. All the signs said the same thing.

THIS BRANCH OF THE LIBRARY WILL BE CLOSED DURING THE MONTH OF OCTOBER.

Closed. Just like that. For construction. They’re adding on to the existing building, doubling the branch’s total size. Sounds like a great thing, right? And maybe it is, but I live in a small town with just the one library branch, and while they used the month of October to set up a temporary location, I knew a lot of people would be in the wilderness. My goal was to live (read) only off of the books I checked out before the branch closed. Why? Because I bet that there are a decent number of people where I live for whom the library is their only real source for books, and I wanted to see what it’d be like.

I thought I was so smart. I thought my plans would be enough. I gazed pitifully at all the poor saps I saw browsing the shelves at the end of September, each with a book or two underarm, thrilled that their normal checkout time was going to be extended until after the temporary location opened its doors in just more than a month’s time. Pride cometh before a fall, as they say.

I look back now at the journal entries I conveniently started recording immediately prior to this series of trying events, and I’m struck by the naiveté of the foolish young man I was then. How hopeful. How innocent.

Just got back from the library. Took two trips to get everything in from the car. I pulled off the shelves pretty much every trade of every comic that I hadn’t already read, got an audiobook for my wife, and checked out every piece of nonfiction I’d heard anything good about. More than 40 books in total. The library lights go out tomorrow night, but I’m prepared. I’ll be fine.

I’m sure it isn’t a big deal, but I’ve already read almost all of the comics. I wanted to space them out, but Loki: Agent of Asgard was really good and I just kind of plowed through it (along with, umm, a ton of others). The nonfiction will hold me for a while, I’m sure.

I’m staring at the towering stack and wondering how it came to this. It all happened so fast. I thought it would be enough. I was arrogant. Thirty days. Sounds like all the time in the world, doesn’t it? I’ve got to space things out now. Be more careful. The nonfiction has to last me awhile.

It seemed like a miracle. I thought my problems were solved. It came to me in a dream, the voice of a librarian, ringing out from behind the reference desk: “Our digital download services will still be available during the shutdown, including ebooks and audiobooks.” I was saved! Or so I thought. It was a mirage, a phantom oasis. The digital services were indeed running, or at least what was left of them. The ebook and audiobook downloads are a wasteland. Every book I search for, every book that looks promising as I browse? Holds upon holds upon holds. I forget how many others are in this wilderness with me. Ooh, lookit! Marvel Unlimited is only seventy bucks if you pay for a year up front. Sweet!

I’ve taken to wandering around bookstores in the evenings. I pretend to pull as many books as I want off the shelves, ignoring those new hardback price tags. I go to the counter and ask the clerks how to find obscure titles that I’ve intentionally moved to other shelves, but none of them have the gritty determination of a reference desk librarian. It’s just not the same. I even sat in an overstuffed chair and pretended to search through some genealogical records on micro film. I never actually did that when the library was open, but sometimes you don’t miss a thing until it’s gone, y’know?

Finished with everything. The finish line is in sight. Nine more days. I can do this.

Without buying a Marvel Unlimited or an Oyster subscription or loading up at a bookstore or having the privilege of writing for a website that affords me the luxury of receiving new books at no cost, how would I go a month without a library nearby? Its absence was pronounced, even though these other avenues are readily available to me. Even the (hit or miss) availability of books on the library’s digital database is contingent upon access to an ereader, smartphone, computer, and/or a steady internet connection. Many folks have these things, but many don’t. And even when the temporary site opens, it will be miles outside of the heart of our town, far from any densely populated area. A lot of readers are going to be in a tough spot until the Spring, when the construction on the original branch is completed.

The library is back. I’ve got a hernia’s worth of books to return, so I better get to it. The lack of a library has left a hole in our town. Maybe the temporary facility can fill part of it until Spring arrives. Here’s hoping.