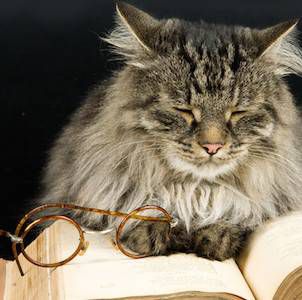 Raise your hand if you think that cats would write some freakin’ awesome books.

The only reason they don’t? Because we shoo them away from the computer and they don’t have opposable thumbs so they can’t hold a pen.

Well, during my latest visit with the parents back east, I had a cozy little chat with my little cat brother, Max (my parents’ favorite child- for reals). We talked about books, movies, you know…And then he said that he was thinking of writing a novel, which inspired this post. So this one’s for you Max, you handsome tuxedo-cat you.

Mewlysses– This novel would follow a cat as she roams around the city over the course of a single day. She’ll graciously share her breakfast with her human companion, prowl around some trash bins, crash a spilt-milk party, and chase after some other kitties for a little mrrroowwww, if ya know what I mean. Then it’s back to the house and the warm, fluffy cat bed and the human snores.

The Milk and Sixpence– A cat becomes dissatisfied with his cushy, boring life in the big city and stows away on a ship bound for Tahiti. Once there, he meets up with some native cats and they all experiment in rolling around in the paint left around by some absent-minded artist-dude named Gowgin or something. It’s a good life.

To Kill a Mockingbird*- 1. Bird. 2. Tree. 3. Cat. That’s the dilemma. How will Snowflake climb the tree, catch the bird before it flies off, and then get back down on the ground without killing herself? Well, this is her story.

Tender is the Mouse- This is the story of a cat who just can’t keep himself from chasing milk trucks and his kitty companion, Nikie who only sticks with him for the milk he finds for her. After a while, they move to separate cat beds and Nikie eventually leaves him for another cat.

One Flew Over the Cuckoo’s Nest*- It’s July, and Skittles knows what that means: a week boarding at the vet’s. The usuals will be there: Goose, with her missing eye and foul tuna-breath; Socks, his fur matted and tangled despite being brushed a hundred times a day; and Alexander Bonaparte XVIII, who squeals something awful every time he doesn’t get his way. But best of all, there’ll be the vet’s assistant, Harmony, who will terrorize them when nobody’s looking and then ply them with cream and tummy-rubs when visitors arrive. It’s gonna be a long week.

The Big Cat-Nap- Some cat has stolen Pursey’s favorite mouse toy, and that cat’s gonna pay…..riiiiiight after Pursey chases that ball of yarn and then takes a nap.

The Great Catsby- She’s so near, yet so far. Spots watches Mathilda every day, sitting in her window across the street, staring and mewing at him. There’s another cat there, but Spot refuses to believe that he and Mathilda are anything other than friends. Somehow, someway, Spot will overcome his greatest fear and leave his house, cross the street, and leap into Mathilda’s paws.

Do Kittens Dream of Electric Mice? Human companion child #2 has purchased a strange contraption: something that looks like a cat and acts like a cat but isn’t really a cat. After some wee-hours poking and scratching, Homer figures out that it’s a mechanical cat. What does this mean? Will it be war between the robocats and the real cats?

A Tail of Two Kitties- War, love, courage, two cats that for some reason look a whole lot alike: what more could you ask for in a novel.