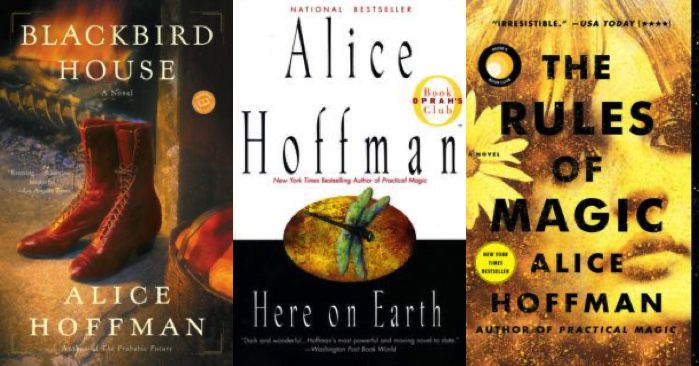 Beginning in 1990 when I read Seventh Heaven, and for every year since, I anticipate the annual release of a new Alice Hoffman novel as I do birthdays and holidays. An Alice Hoffman novel employs ordinary people using extraordinary strategies when confronted with some of life’s challenges (e.g. bringing a recently deceased and accidentally killed bad boyfriend back to life, one of the challenges in Practical Magic). As Hoffman develops her stories, the reader is attracted to the distinctive plots with her very flawed characters that compels the reader to turn the page and finish the story.

It is a constant in my life: I either put in a hold request at my local library or, if I know that Alice Hoffman will be coming to town at a bookstore near me, I buy the book and look forward to her autographing the title page.

Also, I am assured that Hoffman will always bring a tear to the eye somewhere in the book—not just at the end. And of course there are those subtle magical enchantments throughout some of Hoffman’s books that makes for delightful reading. However, it is the wisdom Hoffman’s characters reveal to the reader, on the sorrows of loss and the regeneration of love, that also have me returning to a new Hoffman story.

Throughout this pandemic year, readers have been returning to stories that they have heard before to bring a semblance of temporary relief to the stresses of living with COVID-19. An Alice Hoffman story is an excellent tonic for our stressed hearts and minds.

But where to start with Alice Hoffman? She has written nearly 30 novels over three decades, and which one will best soothe a weary spirit?

To assist the reader, I have chosen seven Alice Hoffman novels to read this pandemic summer and into the fall. They are listed here alphabetically by title. But don’t stop at the end of this list: Alice Hoffman has also written several young adult titles as well as more adult novels.

Blackbird House is a farm on the Outer reaches of Cape Cod, Massachusetts, that was built in the times of the British colonizers. The novel is told in a series of stories that tell the personal histories of the farm’s inhabitants throughout the farm’s 300-year history. How the history of the country, with its economic hardships and wars, the advances in technology and the introduction of the car, two world wars and the aggressive technological advancement of this modern age, affected these isolated Cape Cod inhabitants and the choices they made, makes for fine reading. 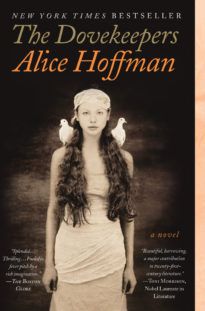 Alice Hoffman spent five years researching and writing this historical novel of Masada, set in the Ancient Judean Desert, 70 CE. The Dovekeepers is the story of 900 Jews, living on a mountain named Masada, that held off the Roman armies for several months. Only two women and five children survived the Roman onslaught—the 900 Jews on Masada sacrificed themselves rather than be taken as Roman slaves or die by a Roman soldier.

The Dovekeepers are the four women who preside over the dovecote at Masada, all of whom have come to Masada from various parts of Jerusalem and the Judean desert. Hoffman renders this iconic and historic incident with great skill: as the reader experiences the final days at Masada, we experience the escape of the two dove keepers who realize their destiny is not one of death, but of life and to tell the world what happened at Masada.

For those who know Alice Hoffman, it is a well-known fact that one of Hoffman’s very favorite books is Wuthering Heights. There is so much left unknown, the ambiguity at the end, is how Hoffman has commented on Emily Brontë’s enduring novel. After reading the first few pages of Here on Earth, I thought I was reading Wuthering Heights set in the modern day of a small town in Massachusetts. Hoffman’s tale of obsessive love begins when March Murray returns to her Massachusetts hometown with her teenage daughter to pay her last respects to her housekeeper (who had served as March’s mother when March’s mother had passed in her infancy). Upon her arrival, March encounters the fixation of her youth: a scoundrel named Hollis (the modern day Heathcliff); March becomes temporarily and very dangerously seduced by Hollis’s obsessive and brutal love. But one day March shakes off Hollis’ controlling aggression and there is a happy ending. A cautionary tale: beware of men who proclaim their love for you—but isolate, silence and confine you as proof of their devotion.

The Museum of Extraordinary Things

This is another remarkable tale of two lovers (one a mermaid in a Coney Island freak show; the other an Orthodox Jewish Russian immigrant who leaves his Lower East Side for art) during the first few decades of the 20th century in New York’s lower Manhattan. Once again, there is some magic realism combined with historical fiction to have the reader experience the Triangle Shirtwaist Fire, the corruption of the rich and powerful, the dashed expectations of the immigrants and of New York’s poor, and the experience of love in hard times.

The Rules of Magic

For the lovers of Hoffman’s earlier book, Practical Magic, comes the story of the two Owens sisters who raised Gillian and Sally. The Rules of Magic has the reader traveling to Paris; Northern California; Salem, Massachusetts; and the Upper West Side and Greenwich Village in Manhattan. The two aunts, Jet and Franny, are raised in Manhattan’s Upper West Side along with their brother Vincent (who is wise in the ways of magic and music and love). Their mother, Susanna Owens, has completely eliminated her past with her magical tendencies and is determined to squash any such tendencies in Vincent, Jet, and Franny. Yet, circumstances and love present themselves and each Owens child makes their own pact with their bewitching familial lineage of magic and how to build a satisfying present and future with both magic and the very ordinary coexisting. And, don’t forget the triumph of love over fear and the wisdom of animals who accompany us throughout our days.

Elisabeth (known as Elv), Meg, and Claire are the beautiful and black-haired Story sisters who live with their divorced mother Annie on Long Island. One day, a brutal encounter occurs between Elv and Meg and a violent stranger. Elv and Meg swear themselves to secrecy—but at a great cost: Elv enters into an imaginary dual fairytale existence that is combined with the gritty reality of her bad choices (drugs, very bad boyfriend choices) and the tragic consequences on the rest of her family. Elv and the Story family finally find themselves back on the path of healing and wholeness—but at another high cost. 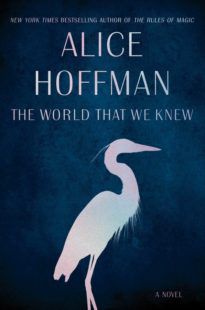 The World That We Knew

“That was how evil spoke. It made its own corrupt sense; it swore that the good were evil, and that evil had come to save mankind. It brought up ancient fears and scattered them on the street like pearls.” Hoffman was writing about Berlin in the years before World War II, but this description fits these present days when the country is confronted with a president and his followers motivated to destroy science and humanity itself for political expediency. This is an extraordinary story of the marriage of World War II French history and myth: to escape the Nazis, Hanni, the mother of 13-year old Lea, works with a Rabbi’s daughter to perform the rites to bring forth a golem, a mystical Jewish creature that is sworn to protect Lea when she escapes from Berlin and the Nazis and goes to Paris. Once there, Lea meets her soul mate, leaves Paris when the Nazis invade, and travels across France with Ava, her golem, in their flight of resistance against the Nazis.