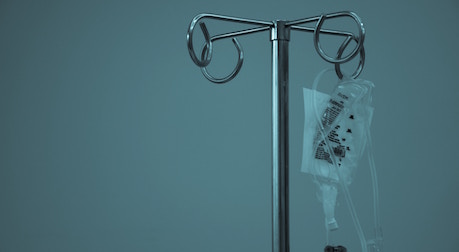 When I finally went to Urgent Care on the last day of our winter break last January, I thought a charming, Victorian illness was likely. Pleurisy, perhaps, which has a whiff about it that reminds me of scurvy and consumption, and which, in these modern times, isn’t as deadly as other possible ailments.

For almost a week I’d been feeling increasingly uncomfortable, but not really in pain. But then, after a bad night, I woke on the Martin Luther King Jr. holiday, and it was obvious that something was wrongedy-wrong. Finally I realized I should probably go ahead and hustle over, not wait until the regular work week. But first I cleaned the kitchen, processed all the laundry, and paid the bills. Like you do.

The good people at Urgent Care couldn’t give me a conclusive diagnosis, and my symptoms were concerning. So I was sent directly to the Emergency Room.

Ever since his cancer chapter, my ex-husband and I have been pals. So he was my go-to, my driver, for this potential medical emergency scenario.

We got in the car.

“I’m not ready for the ER. You always have to wait and wait and wait. I’m going to need some reading material.”

“Nicole. The doctor wanted to send you in an ambulance!”

“Please! It will only take a minute!” 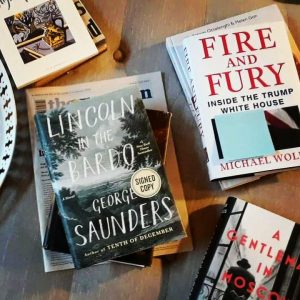 The strategically placed sticky note is everything.

So we stopped at my house, and I ran inside quickety-snip, gathered up an armload, and then we proceeded directly to the hospital.

The ER doc took note of my pile.

“Not yet. So far, so disturbing. But it helps having a sticky note over the picture of the president’s face on the front.”

After book chat and, again, a description of my symptoms—by then I’d told the story at least half a dozen times—he sent me off for a CT scan. And that confirmed it. Nothing so literary and romantic as pleurisy. Or consumption. Instead, it was a pulmonary embolism. Or, plural, emboli. And an infarct, too, which sounds amusing when you say it out loud, but isn’t so much when you realize what it is. “Dead tissue.”

This all seemed a bit of overkill for getting out of a few days’ work.

And then there were more tests. A lot of tests. By then it was getting late, closing in on midnight, and the corridors were eerily dim and empty. A young fella named Parker was in charge of whisking me around the labyrinth.

“I’m impressed with your skills. Ever pop any wheelies? Jumps?”

Good man, humoring me. I mentioned that everyone was making my hospital experience as jolly as it could be, considering. Which was considerate, I said, since this whole medical emergency hadn’t been on my agenda for this week.

I thought about that. And then, remembering everyone wearing the masks downstairs, and thinking about how much worse I could be feeling, I said, “Well! At least I don’t have the FLU.”

Parker snorted. “Right,” he said, “You only have an ACUTE. PULMONARY. EMBOLISM.”

“But it’s merely uncomfortable!” I couldn’t get over the idea that I was in mortal peril, because so many more minor problems feel so much worse.

He snorted. But it was a half-hearted snort.

Parker was attentive and made sure my reading materials were never left behind in any of the rooms I was taken. It got to be a joke. “Almost forgot to hand you your pants. I feel like you’d forgive me for losing the pants, but not the books.” He was not wrong. 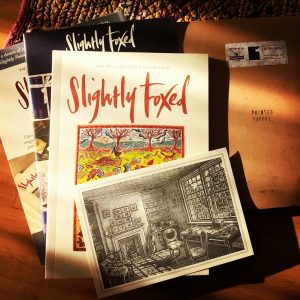 My children typically vie for Favorite Child status, but this year they banded together to give me a gift subscription, bless them. The first issue arrived just in time for my health crisis.

It seemed to take forever for the room in the main hospital to be ready. While I waited in the ER, I finished my Guardian Weekly crossword puzzle and read through the issue. Tried reading my beloved Rosemary Sutcliff’s memoir, Blue Remembered Hills. I’d picked up that slim volume last summer at an adorable bookshop in Hexham, along Hadrian’s Wall, the lovely edition she deserves, published by Slightly Foxed. I also had with me their sweet Reader’s Quarterly, “a magazine for people who love books.” I was not in the mood for Fire & Fury.

Too tired to read, too uncomfortable to sleep.

Finally, in the wee hours of the morning, I was moved to the main hospital. By then it was so far past my bedtime it was almost my rising-in-the-morning time. My misery was sleep deprivation– and not embolism-related. And even when the staff is as friendly as you could possibly imagine, it’s hard to sleep with tubes in both your arms and someone coming in to take your blood every ten seconds or so.

When I was alone at last and the lights dimmed, dog tired but unable to relax, I scrolled through the audiobooks on my phone. Nothing appealed to me. Classics of Russian Literature? That would be a yes, please at nearly any other time. Hard pass at 3am. Hmm. Russia. In the news quite a lot these days, and just that week I’d finished Amor Towles’s A Gentleman in Moscow. I very seldom reread books, but decided to give it another whirl.

The narrator’s voice in the dark was not loud enough to drown out the machines, but was comforting and familiar and distracting. And Rostov. Rostov, my buddy, making the best of a very bad sitch. When you are a tethered to machines, that house arrest dealio takes on a new resonance.

The next morning, I was adjusting to the idea that I would be stuck in the hospital for days when a new doctor on duty breezed into my room with great news. My insurance would cover a better medicine than the one I was on. “I don’t know why they put you on that rat poison. I can bust you outta here this afternoon.”

But I would have to lay low. No walking to work, not even that short mile.

“Can I go back to work if I promise not to run up and down the stairs?”

“Do you usually run up and down the stairs?”

I must have looked guilty or confused or both, because before I had a chance to answer, “No stairs. Take the elevator.”

See. At this point, I hadn’t asked the Google to tell me about pulmonary embolism. My son had, though, the night before, and he immediately packed his bags to come stay with me. Later I realized why young Parker had been racing my wheelchair through the corridors—he didn’t want me to croak on his watch.

After I was released, walking the several blocks to the car, which, in retrospect, I should likely not have done, I had a new appreciation for the sunshine, rare in this neck of the woods in January, a new appreciation for the out-of-doors. Rostov was more real to me, more close to my heart, than any fictional character I have encountered. And that sense of intimacy with the count can’t be put on the pain meds, either, because I wasn’t on any.

A few days after I returned home from the hospital, I was surprised and moved by all the care and affection coming my way. But there was also a theme:

“Everyone keeps telling me to follow the doctor’s orders. Why wouldn’t I? I mean, I don’t want to die!”

“Mom. It’s probably because you didn’t follow doctor’s orders at all. You stopped for books instead of going directly to the ER. And you told everyone about it!”

We’re several months out now, and my recovery has been steady and uneventful. I almost felt sorry for the hematologist, who, with the saddest face, told me he could find no cause for the P.E. Technically, it was “unprovoked.”

This past weekend my son visited again, for pleasure this time, instead of to tend to his invalid mother. When he left, he took my print copy of Gentleman with him, which, obviously, I needed to buy, after bonding with the count. Obviously.

Reader, let me be a walking cautionary tale. If you are unwell, skip the chores and bill-paying, and please don’t stop for books on the way to the emergency room. Carry them with you at all times.