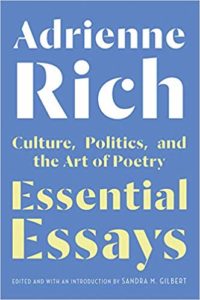 I discovered Adrienne Rich, embarrassingly, toward the end of college. I had vaguely heard her name, but did not yet know the significance her work would have for me. I first read Rich’s work after I read Wild: From Lost to Found on the Pacific Crest Trail by Cheryl Strayed, the Oprah book pick that spawned a million hikers, sometime in 2013. On Strayed’s now famous hike across the Pacific Crest Trail, the only book she didn’t tear up to save room on her journey was Adrienne Rich’s Dream of a Common Language. Soon after, I read bits and pieces of Rich’s work in feminist theory courses, in English courses, and on my own. Her work, particularly her essays, in which she seamlessly entwined her own personal experiences, her feminist politics, and her love of literature, served as inspiration of my own.

But I’ve wondered, specifically with the release of her Essential Essays, why she has stayed relevant when other writers of the ’70s feminist movements have not. In some ways it’s simple: Rich wasn’t outwardly racist in the way Susan Brownmiller was (Brownmiller, in her book Against Our Will, argued that if Emmett Till wasn’t murdered he would have raped someone). She wasn’t essentialist about gender like Shulamith Firestone (she emphasized biological traits in her writing). And she wasn’t homophobic like Betty Friedan and other conservative feminists, who feared “the lavender menace,” lesbians engaged in the feminist movement. But the fact that she isn’t read as offensive doesn’t mean she is relevant, doesn’t mean we need to keep coming back to her. But we do anyway. Or at least I do.

Strayed wrote in Wild, “I’d read The Dream of a Common Language so often that I’d practically memorized it. In the previous few years, certain lines had become like incantations to me, words I’d chanted to myself through my sorrow and confusion. That book was a consolation, an old friend, and when I held it in my hands on my first night on the trail, I didn’t regret carrying it one iota—even though carrying it meant that I could do no more than hunch beneath its weight. It was true that The Pacific Crest Trail, Volume 1: California was now my bible, but The Dream of a Common Language was my religion. I opened it up and read the first poem out loud, my voice rising above the sound of the wind battering the walls of my tent. I read it again and again and again.”

Of course, there is no one answer. And poetry means different things to different people at different times. I loved Rich’s essays, particularly on feminism and the academy, as I was struggling to reconcile my love of scholarship with its restrictions. I loved her poetry, particularly her poems about grief, as I was coping with major loss for the first time. And the poems written during the height of the feminist movement, found in her collection Leaflets, seamlessly embody my feminist rage.

But I think, if I could guess, that Rich’s continuous appeal over the last 50 years is more about her absolute certainty that politics and art were intrinsically linked, that art was meaningless without political consciousness, that nothing could exist within a vacuum, and that choosing not to take a stand was in fact choosing the side of the oppressor. She was criticized harshly for this, particularly by other women writers. Elizabeth Hardwick said “I don’t know what happened. She got swept too far. She deliberately made herself ugly and wrote those extreme and ridiculous poems.” Susan Sontag wrote, in the midst of a particularly heated debate with Rich, “Like all capital moral truths, feminism is a bit simpleminded. That is its power and, as the language of Rich’s letter shows, that is its limitation.” These women thought that somehow, Rich’s poetry was undermined by her political commitments, that it was somehow less honest to the craft, as if poetry exists somewhere in the ether, effected by neither politics or “real life,” whatever that may be.

But Rich continued to take stands until the end of her life, long after the second wave feminist movement had waned. She famously refused the Presidential Medal for Arts in response to the defunding of the NEA. In Her essay, “Why I Refused the Presidential Medal for Arts,” Rich wrote: “Art is our human birthright, our most powerful means of access to our own and another’s experience and imaginative life. In continually rediscovering and recovering the humanity of human beings, art is crucial to the democratic vision. A government tending further and further away from the search for democracy will see less and less ‘use’ in encouraging artists, will see art as obscenity or hoax.” This, now more than ever, strikes a chord. How have we strayed so far from democracy? Had it started, the reign of Donald Trump, in 1997, long before he took office, as we lost sight of the importance of art and expression to politics, to democracy?

Rich was also a lifelong critic of capitalism and saw her art as integral to her fight against it. She wrote: “These concerns engage me as a citizen, feeling daily in my relationships with my fellow citizens the effects of a system based in the accumulation of wealth—the value against which all other values must justify themselves. We all feel these effects, almost namelessly, as we go about our individual lives…But these are also my concerns as a poet, as the practitioner of an ancient and severely tested art. In a society in such extreme pain, I think these are any writer’s, any artist’s, concerns: the unnamed harm to human relationships, the blockage of inquiry, the oblique contempt with which we are depicted to ourselves and to others, in prevailing image making; a malnourishment that extends from the body to the imagination itself. Capital vulgarizes and reduces complex relations to a banal iconography.” To Rich it wasn’t simply that the poet could enter into conversations about democracy, capital, and politics—but that it was necessary for the truth of their work.

Adrienne Rich wasn’t “just” a writer. She refused to be silent, whether it be about racism and Civil Rights, the feminist movement, the defunding of the arts, or the Iraq War. For Rich, the very fundamental nature of poetry was disturbed if it was disconnected from the political, because after all, the political was what shapes our lives.

In the last few years, since the election of Donald Trump, it has become impossible not to be political. To be apolitical is to support the growth of fascism, white nationalism, and the downfall of the republic. But Adrienne Rich, though she died four years before the election of Donald Trump, can show us a way. As anti-semitism rises in the aftermath of the Pittsburgh synagogue shooting, Rich’s essay “Split at the Root,” on her Jewish identity, is as  important as ever. As more and more accounts of gross abuse injustice in higher education are revealed, her essays on Jane Eyre and Emily Dickinson grow in importance. And as we grapple with divisions in feminism, like the two gay male feminist English professors at Penn State who have argued their own academic freedom to slur and dead name are more important than the identities and safety of their students, we can turn, like Cheryl Strayed, to Dream of a Common Language and have it guide the way. This isn’t to say Adrienne Rich wasn’t flawed: her debates with Audre Lorde on intersectional feminism and white anti-racism are sometimes difficult to read. But, until the end of her life, Rich grew—in her politics, in her feminism, and in her poetics. She never remained static, was never afraid to admit she was wrong, never stopped recommitting herself to justice.

In a recent piece for The New York Times, Poet Laureate Tracy K. Smith writes about the increased politicization of the poet during the age of Donald Trump. She writes about her time in graduate school, when the domain of the political poem was best left to the experts, like Adrienne Rich, though she adds that Rich wasn’t the voice being taught in seminars. Politics could easily tarnish one’s craft, lead you into polemic, turn you away from the all important Lyric I. But more recently, Smith writes, political poetry “has become a means of owning up to the complexity of our problems, of accepting the likelihood that even we the righteous might be implicated by or complicit in some facet of the very wrongs we decry. Poems willing to enter into this fraught space don’t merely stand on the bank calling out instructions on how or what to believe; they take us by the arm and walk us into the lake, wetting us with the muddied and the muddled, and sometimes even the holy.” In a time of violence, upheaval, and oppression—in other words, in 2019—there is no choice to remain apolitical. Poets from varying backgrounds, from Evie Shockley and Kevin Young, prominent African American poets with academic training, to Elizabeth Acevedo, a National Book Award winning poet and YA author who came up in slam, to people like Sonia Sanchez and Nikki Giovanni, poets who came to prominence during the explicitly political Black Arts movement, are engaging politics and oppression with their craft. Remaining apolitical, in the year of our lord 2019, is a privilege we do not have. It is maybe a privilege we have never had. But Adrienne Rich, like she did for Cheryl Strayed, like she has done for budding feminist scholars like me since the ’60s, can guide us. “Lying is done with words, and also with silence,” she wrote. We must tell the truth.