The morning I interviewed Andy Weir, I had an issue with Comic Con security. No, I wasn’t sporting any suspect prop weapons. The ladies and gents on the door just wouldn’t let me in despite my explanation I had an interview booked at 0930 and my showing them the confirmation email. Not even the mighty, chartreuse “PRESS” ribbon stuck to the bottom of my badge could sway them. Luckily, the folks at a more discreet entrance took pity on me and allowed me through.

After bonding with him over the unseemly vocabulary we’d used to express our mutual predicament, I did actually get to talk to Weir about books, space nerdery, and a headcanon cross-over that would be ah-mazing.

BR: The Martian was originally serialized on your blog and then you wrote Artemis as a full novel. Were they totally different experiences?

AW: It was completely different. With The Martian, I got feedback with every chapter from hundreds of people and that helped keep me motivated and it was exciting…it helped push me along. With Artemis, I was by myself. I would send the chapters off to my agent and editor and get feedback from them, but it wasn’t quite the same. Also, for The Martian, I had three thousand fact checkers so my nerd audience, these are my people, would tell me if I had any math errors, any chemistry errors, anything scientific or factually inaccurate, they’d let me know right away. That was awesome and it’s what helped The Martian be so accurate. For Artemis, I was on my own so I had to really put a lot more time and effort into verifying facts and I still made some mistakes.

BR: Do you have a big cross-audience with fans of The Expanse?

AW: Yeah, we do! There is quite a lot. And there are a bunch of headcanon, fan theories that The Expanse and The Martian take place in the same setting. They don’t…I don’t think the guys who are James S.A. Corey would want to confine themselves to my universe for their universe’s past, nor would I want to confine my universe’s future to theirs, but we do joke around about it.

BR: Although watching Bobbie (Draper) take on some of your characters would be rad.

AW: That would be cool! I do highly recommend The Expanse to anyone who hasn’t read or watched it.

BR: The Martian had some fantastic female characters but, obviously, the main POV character was male. You switched that in Artemis. What was that process like? 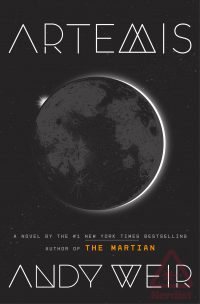 AW: In Artemis, the main character, Jazz Bashara, is a female, twenty-six year old, Saudi Arabian so, you know, write what you know. I didn’t do it on purpose. I want through several revs of what Artemis‘s story would be. I designed the city first, because I love the engineering, then I was like, “Okay, I made a city on the moon, now I need characters and a story to happen in it.” I came up with an idea. I needed a very tertiary character who was going to be in like, three scenes, an underworld contact who was a lovable rogue, so I created Jazz and thought, “Okay, Artemis is very international, if you can afford to get there, you can live there, it’s as simple as that. What’s a country I haven’t used yet? Saudi Arabia. And we’ll make her a woman because women are more interesting than men,” to me anyway. “Loveable rogue, female, Saudi, lapsed Muslim…it will be cool.” That story didn’t pan out and I came up with a different story idea; I took elements from the first one I liked and Jazz was one of those elements. She was a little more prominent in the second story but the second story didn’t work out well either; it just wasn’t coming together…finally I said, “You know, Jazz is pretty interesting, what if I write a story about her? A crime novel set on the Moon, I can do that.” So she ended up being the main character and by that point, she was so cemented in my imagination that my brain would have rebelled if I’d tried to change her into something I’m more familiar with.

BR: Are Artemis and The Martian in the same universe?

AW: I’m leaving that up in the air. They can be or they might not be. It leaves it open for me to do whatever I want with either one. And I can tie them together later if I want.

BR: What are you reading now? What do you enjoy? Do you have time to read for fun? 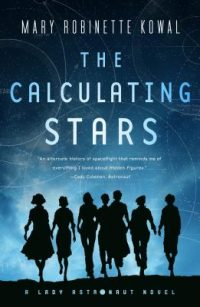 AW: I don’t really have time to read, unfortunately. Though I am, at this moment, reading, The Calculating Stars by Mary Robinette Kowal; it’s hard sci-fi, which is my jam.

BR: Anything in particular you go to for inspiration if you feel like you’re stuck?

AW: I just go back to the science. It really does work. Science drives the plot of most of my stories and if I delve in to, “Okay, let’s take a look a little deeper into the science of this or the science of that,” I’ll eventually find something interesting that makes me say, “Oh, that’s an interesting little thing. What if that became an issue? How can I make that an issue?” And then I start working on the plot, working backwards from there.

BR: Do you remember what the very first nerd-science thing that got you interested or really excited was?

AW: I don’t really know. I would have been a child, for sure. I can remember watching the space shuttle launch…I was doomed to be a science geek because my father was a particle physicist and my mother was an electrical engineer, so that was our household. For dad, it was a passion…for mom it was a paycheck. She liked books a lot more than she liked science.

BR: What other parts of space would you ultimately like to take people to?

BR: So,  Star Wars nerd. What color would your lightsaber be?

AW: I’m not saying I’m a Sith but I’d probably go with red because I’m too damn lazy to go get my own Kyber crystal. I’ll just take one of the synthetic ones off the shelf…what I heard was synthetic crystals make red sabers, the natural ones make the various other colors. I’d be the most lazy ass Padawan, they’d be like, “Padawan, why is your lightsaber red,” and I’d say, “Because I bought a crystal at Frye’s.”

And there you have it.