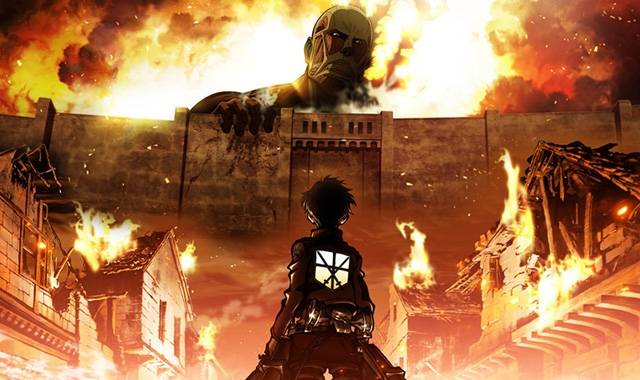 Anime fans, time to get excited. An air date for the second season of Attack on Titan has finally been confirmed: Spring 2017. Don’t miss it! After reading Attack on Titan is fun and all, but this is a series made to be watched.

For anyone wondering what Attack on Titan is…Well, it’s arguably the biggest manga property to come out of Japan within the last decade. Imagine a world where humans have been wiped out by man-eating giants. The last remnants of humanity have retreated behind towering walls built to keep the giants out. But what happens when those seemingly impenetrable walls fail? What happens to mankind then?

So opens Attack on Titan, when the outermost wall of humanity’s last bastion falls and sends series protagonist, Eren Yeager, and his childhood friends, Mikasa Ackerman and Armin Arlert, on a path that leads them to joining the Survey Corps, a military branch charged with the task of exploring beyond the city’s walls and finding a way to defeat the Titans. The first season of the anime adaptation aired in 2013, catapulting Attack on Titan up the bestseller charts. Remember, the true purpose of anime adaptations is to drive sales of the original manga in Japan and Attack on Titan gave perennial juggernaut One Piece a run for its money that year.

To say that fans have been anticipating a second season of the anime for a long time is an understatement. But if you’ve only come upon Attack on Titan recently, no worries! We have you covered here at Panels. 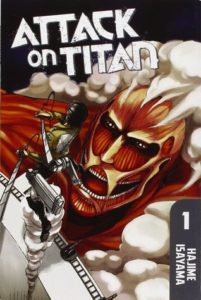 Attack on Titan by Hajime Isayama
The core series that started it all! At 19 volumes and going strong, the main series follows Eren Yeager as he joins the Survey Corps for the purpose of killing Titans, which were responsible for destroying his hometown and killing his mother when the outermost wall fell. Sounds simple, right? Unfortunately, things are never so easy. Eren’s journey uncovers some mysteries about the Titans, the inner workings of the military and nobility, and a big secret that his father was keeping. Attack on Titan is not your standard shonen manga. There’s a high body count—no resurrections or fake out deaths here!—and Isayama doesn’t shy away from showing the bloody results. 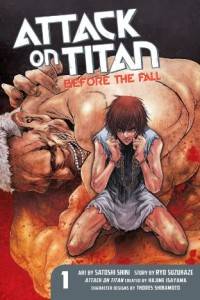 Attack on Titan: Before the Fall by Ryo Suzukaze and Satoshi Shiki

Category ID: 1074
Category ID: 15400
Check Your Shelf Newsletter
Sign up to receive Check Your Shelf, the Librarian's One-Stop Shop For News, Book Lists, And More.
Thank you for signing up! Keep an eye on your inbox.
By signing up you agree to our terms of use
Originally a light novel written by Ryo Suzukaze, Satoshi Shiki began a manga adaptation in 2013. If you’ve ever seen any Attack on Titan-related visual, chances are high that you’ve seen the military gear that the characters wear. Crucial to the soldiers’ success is something called three-dimensional maneuver gear (3DMG), which allows them to fight against the Titans. Before the Fall takes place 70 years before the main series and chronicles the development of the 3DMG. 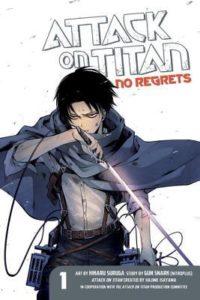 Attack on Titan: No Regrets by Gun Snark and Hikaru Suruga
While Eren is the protagonist of Attack on Titan, I think it’s safe to say he’s not the fandom favorite. That honor belongs to Captain Levi. Known as Humanity’s Strongest Soldier, Levi is a Titan-killing machine. No Regrets delves in Levi’s origins as a street thug from the underground city and how he came to join the Survey Corps.

(Please: if you read the main manga, refrain from including spoilers in the comments. I know it’s been a couple years since we discovered Levi’s family ties, but if people are new to the series or only watch the anime, this will ruin a fairly large reveal.) 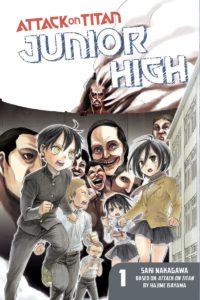 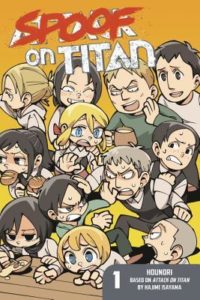 Spoof on Titan by Hounori
If you’re hankering for more Attack on Titan parodies, you’re in luck. Spoof on Titan is another comedy series inspired by Isayama’s manga. This one is in 4-panel format, which is a format traditionally reserved for gag comics in Japan. If you read Monthly Girls’ Nozaki-kun, you’ll be familiar with it.

And there you have it: a crash course in reading Attack on Titan. I know some librarians have been stumped by the “junior high Attack on Titan” request coming from teenaged patrons, so hopefully this has cleared up the confusion. There is indeed a series where they’re in junior high.

Any questions about reading Attack on Titan? You know what to do.