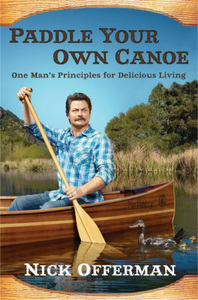 Of course Nick Offerman, aka Ron Swanson, would write a book titled Paddle Your Own Canoe. After reading it, I’d strongly argue that he’s an even cooler dude in real life than on the screen. He’s mostly the character of Ron Swanson, except he’s way more compassionate and thoroughly loves his first and only wife (who happens to play Tammy 2). While it’s impossible to share with you all of the incredible anecdotes from the book, there are these 28 nuggets of both useless knowledge and epic wisdom to glean from its pages: