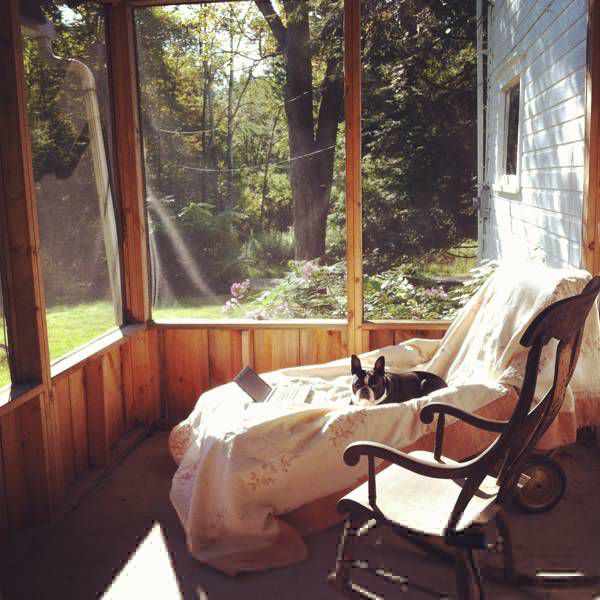 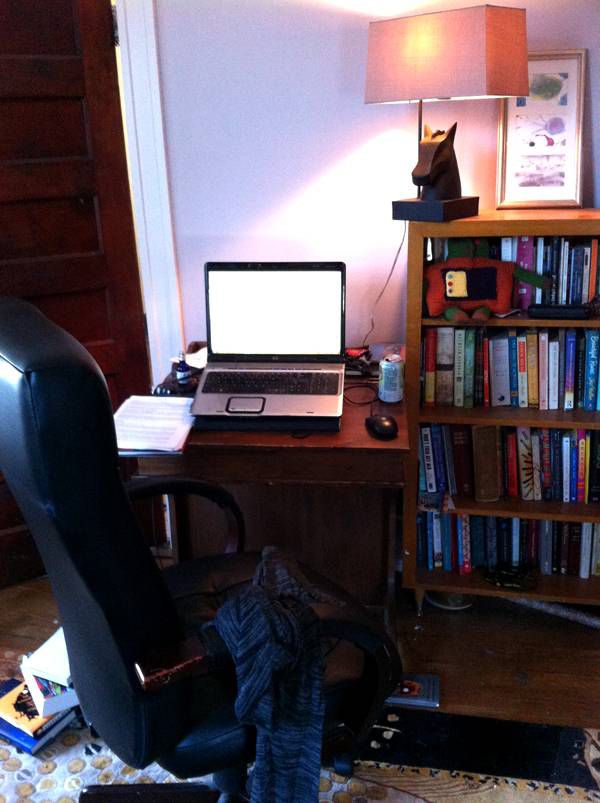 This is the desk where I am working today. I printed out the first 100 pages of my manuscript to revise, so that’s sitting there along with my emergency-hair-holding sunglasses. I’ve got a spray bottle of lavender oil there for evoking my character Bernice, and a can of Ginger Ale for summoning Irene the teetotaler. There’s actually another little bottle of lavender oil behind the ginger-ale, but you can’t see it. To me, they both smell the same. I’ve got a knitted robot from my friend Patricia and a horse lamp from my friend Susannah, some kid art from my daughter. That’s my “currently relevant” bookshelf, although I see Pride and Prejudice and Zombies there, and that’s not currently relevant. Down on the left beside my desk — there’s a copy of Moby Dick in Pictures, of which I can never get enough. That will be currently relevant until the end of time. Not sure why it’s on the floor and Gormenghast is on the shelf. Must rectify.

The desk is not ergonomic, but it is a relic of the house I grew up in. In fact, very faintly in one corner, you can see where I scratched with my fingernail “Eric Heiden” while watching the 1980 Olympic speed skating events at the age of 8, and falling in love. The desk opens up and you can put things inside. I like it because it feels solid. A bigger desk would allow me to accumulate more mess, of the sort that you see currently accumulating behind my laptop. Category: various. 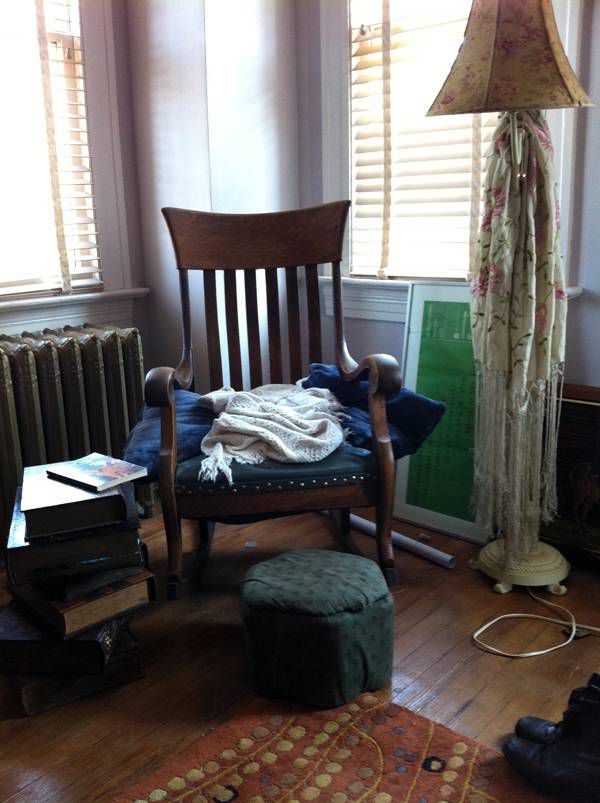 This is what is behind me in my office, when am sitting at my desk. The rocking chair is from mother’s house, the chair where she read to me when I was a kid. The footstool is also ancient — recovered now but made of old coffee cans by some thrifty ancestor. Those fake books are full of scarves and costume jewelry that my daughter likes to play with. I think of this as my reading chair, but I hardly ever read there. The dog hangs out in it when I’m working. The book on top there is Celery Stalks at Midnight — I’m guessing this is evidence of the children, not of a literate dog.

Here’s the spot where I write when I’m at our place in Pennsylvania. I sit on this ancient lawn chaise with a quilt thrown over it — and our Boston Terrier Leroy helps me concentrate. I like to keep him at my feet or in the nearby rocking chair so when I’m perplexed I can pull at his jowls or ask him questions or force him to roll on his back and look ridiculous. Having a good writing dog nearby is a great advantage when drafting a novel.

I’ve only had my own office for a little while, and I never wrote any of Shine Shine Shine while living here. We’ve had the Pennsylvania house for just forever, but I have never been able to really write there before this past summer. I wrote large portions of Shine Shine Shine with my laptop balanced on the coffee table in the living room in our old house, sitting next to it on a plastic gaming chair. I wrote all the sex scenes while tucked away in a mountain cabin in North Carolina, drinking whiskey. Some of it was written in an apartment in Chicago by the lake. I remember writing something frantically in longhand, on a spiral notebook, sitting in a rented beach house in South Carolina while my mother was on life support in a nearby hospital. The book has been everywhere I’ve been for the last twelve years, and really none of the places I am now. In a way, that’s actually a good thing. Shine Shine Shine, especially in its multiple drafts and radically changing structures, is a record of my own evolution as a person. It’s my growing-up book. Now I’m writing a new book in a new room, and it feels pretty good.

Lydia Netzer was born in Detroit and educated in the Midwest. She lives in Virginia with her two home-schooled children and mathmaking husband. When she isn’t teaching, blogging, or drafting her second novel, she writes songs and plays guitar in a rock band. Find her on Facebook, Twitter and at http://www.lydianetzer.com.