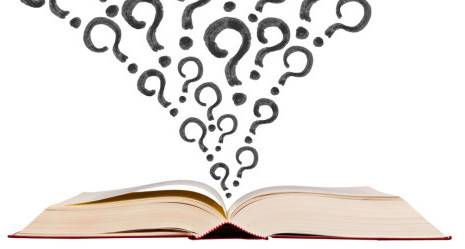 Kate Milford is a triple threat: an excellent human, excellent author, and excellent bookseller. Her latest novel since the Edgar Award-winning Greenglass House is The Left-Handed Fate, which released this month. To test Kate’s middle grade and young adult bookselling chops–she’s a children’s section mainstay at McNally Jackson Books in Manhattan–we asked her to advise a few teenagers in desperate need of a good read.

My dad’s retiring this fall. I’ll have to move out of our home for the last 8 years, AND our new house is going to be much smaller than the one we have now. I could use a book where the character has to deal with a ton of change without anything hugely tragic happening to her as a result. What should I read?

Transitions are crummy, aren’t they? And they just keep on happening.

So let’s start out with a book about character that literally just keeps on going through transitions: Nimona, whose title character is a shapeshifter who hounds villain-by-necessity Lord Ballister Blackheart until he agrees to take her on as a sidekick. And really, while you’re looking at that shelf, why not also pick up Lumberjanes, too? Honestly, when everything in the world is changing all over the place, what’s better than books about kick-ass girls?

Speaking of kicking—check this transition out, because it’s both awesome and ridiculous—you could try Tiny Pretty Things, in which actually fairly unpleasant things do happen at an NYC ballet school. But it’s the kind of unpleasantness that sometimes it feels kind of cathartic to revel in. I would also highly recommend Marcelo in the Real World, in which an autistic teen agrees to try life outside the safe school environment he’s been very comfortable in up until now, and Goodbye Stranger, in which three middle school girls, one boy, and an unnamed high school student work their way through changes in their families and friendships, bullying, extremely bad decisions, and possibly even first loves.

Lastly, because I personally prefer fantasy above all else, I highly recommend you take a look at Akata Witch, in which a Nigerian-born, New York-raised girl discovers that both she and the world in which she lives are unlike anything she could have guessed, and The Girl Who Drank the Moon, in which a girl comes into her own strange magic just as her begins to shift and change.

My boyfriend is a total Nazi. Know any books about bad relationships that I can relate to? 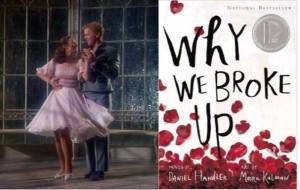 For starters, don’t date actual Nazis. That won’t cut out all the jerks you should avoid, but it’ll seriously narrow the field, and you deserve better, Liesl.

The first thing that pops to mind is that you’ll probably really enjoy Why We Broke Up. It’s not the worst relationship in the world, but it’s one that needs to end, and Min takes you through it from start to finish as she tosses mementoes (illustrated by Maira Kalman!) into a box intended for the boy at the other end of the breakup. Or you could lose yourself in Bone Gap. Yes, there’s a really crappy relationship in there, but there are several awesome ones to counteract it, plus some spectacular magic realism spun from some truly and deeply beautiful writing.

And I definitely recommend E.K. Johnson’s Exit, Pursued by a Bear. Because while I wish ending every bad relationship was as easy as the exit in a movie musical, many aren’t, and Hermione Winters is a reminder that even traumatic experiences don’t have to be the thing that define us when we’re seventeen going on eighteen and beyond.

I’m the youngest of 7 girls, and everyone expects me to do everything just like my sisters! No one thinks of me as an individual. I’ve got gadgets and gizmos a-plenty, but want to read a book about someone forging her own path. Or maybe one about how forks are used? IDK. Any suggestions?

You’re going to have to give me more information if you want me to tell you about forks. Salad forks? Cocktail forks? Carving forks? Crab forks? Sporks or knorks or forks in a yellow wood? Nevermind. Nobody really understands forks—too complicated. But you can read these books, all of which are about amazing girls who take the road less traveled.

I’m going to arbitrarily decide you’re a fantasy reader. No good reason. Just a hunch. Archivist Wasp was one of my favorite books of the past year. In a world that might or might not be a far-future Earth, the job of Archivist is held by a girl who gets the job by killing the previous one. The Archivist’s task is to keep her town free of the swarming ghosts that populate the countryside and to try and learn from them something about a mysterious past event that nearly destroyed civilization. Wasp has defended herself a number of times, but is starting to fall apart when a ghost comes looking for her.

Scorpio Races is set on an island where, every year, the inhabitants race the fierce, carnivorous water horses the place is known for. Deaths aren’t uncommon, but girl riders are. Kate “Puck” Connolly enters the race out of desperation, but she’s racing against Sean Kendrick, who’s won the race several times and has his own reason to need this year’s win.

In The Strange and Beautiful Sorrows of Ava Lavender, the titular character is born with a pair of bird’s wings, and her efforts to live the life of an ordinary girl are pretty much doomed from the outset. And this one’s a family saga. I think you’ll like this one, Ariel. (You could also try The Broken Lands, in which the girl with her own path is a fireworker in nineteenth century Coney Island who has a miraculous gift with fire…but in the interests of full disclosure, I should tell you I know the author and therefore might have a positive bias toward this book.)

My whole high school is full of damn phonies. What’s a book that keeps it real?

Well, the truth is your high school is full of people trying not to be phonies, but high school is pretty much the hardest place to be who you really are—or if it’s not the absolute hardest, it’s a close second to middle school. So give those around you a break. They’re trying just as hard as you are to get through it all without losing it completely. And maybe give yourself a break while you’re at it. In the meantime, try these: all suitable for carrying under one arm while you walk around in a surly fashion with your hands shoved in your pockets and your chin tucked to defend yourself against the constant blows this disappointing world throws at you. 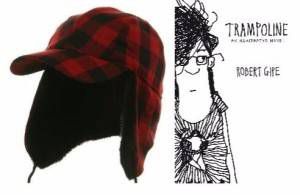 The narrator of Trampoline is trying to figure out who she is, a question that’s deeply tied to where she lives and whether she’ll stay—whether she’ll do something to save her home or something to save herself. Dawn’s world is coal-Kentucky, and it resonates in every line of her story. In Everybody Sees the Ants, Lucky’s grandfather never made it back from his stint in the Vietnam War, the repercussions of this have all but destroyed his family, and Lucky’s way of dealing is to retreat into an imagined Laos where he can rescue his grandfather and escape the bullying he’s subjected to at school. Yes, real is relative here, but trust me, you’ll relate.

Real is relative, too, in Challenger Deep, but sometimes you have to keep it other-than-real in order to survive, and for Caden, the evolution of his mental illness is paralleled by his descent into the Mariana Trench on a voyage that occupies his imagination. And in Aristotle and Dante Discover the Secrets of the Universe, one boy’s offer to teach another to swim changes the lives of both. I defy you not to feel yourself in Ari’s shoes when he complains that “The problem with my life was that it was someone else’s idea.”