The Dictionary of Fictional Techniques is a running feature in which I observe, name, and discuss heretofore uncategorized (at least to my knowledge) literary devices.

This two-for-one entry in The Dictionary of Fictional Techniques was inspired by this post: Why Ron Weasley Should Have Died.

Definition: A secondary character who dies to give a story pathos.

Discussion: It’s not an overly complicated move: give the story weight by making loss real, but at the same time protecting the main characters. Fred Weasleys are particularly common in children’s literature (ostensibly to protect kids) and serial works (for purposes of maintaining storylines).

To my mind, a Fred Weasley is a cop-out, especially in “epic” stories: it makes the rhetoric of danger and doom effectively null. For all of the peril of Sauron, only Boromir from the Fellowship gets it, and as he dies in the first book, we don’t ever develop the kind of connection to him that we do to those who make it to the end. (In hindsight, how laughable is it that Merry and Pippin survive not only the battle of Minas Tirith, but also the battle outside the gates of Mordor?) 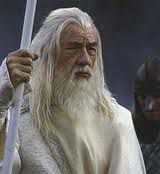 Definition: A character death that is reversed through resurrection or reincarnation.

Discusssion: There are two purposes of a Gandeath. First, it can serve as a variant of the Fred Weasley; you get the pain of loss, but without the finality of it. The second purpose is to imbue a character with a messianic quality.

(I have to admit that I find this really annoying and manipulative. This probably stems from my frustration with Obi-Wan’s full-bodied reappearance in The Empire Strikes Back. I didn’t, and still don’t, understand why, if he could pop up and hangout like that, he didn’t do it all the time. Would have been super-helpful.)

All entries in The Dictionary of Fictional Techniques are original, unless otherwise cited. (This means that they aren’t ‘real words,’ so don’t use them in your freshman comp essay)