Recently, my parents have been doing a clear out of their house in Ireland. I live in the UK, but am home often enough that the nostalgia of this effort has managed to suck me in despite my best intentions. They have found series of books I can’t recall, there are Furbies (Furbys?) in forgotten corners of the attic, and as with all things, there are items which have been lost to time only to reemerge to great acclaim.

This effort by my parents has made me a bit lonesome for home and its varying comforts and surprises, especially as I haven’t been able to go home properly for a few months now. The books they found, from Goosebumps to fairytale collections, have reminded me of the books I read when I was younger, and my favourite of those were the interactive puzzle adventures, many of them published by Usborne, a UK publisher which focuses on children’s books. 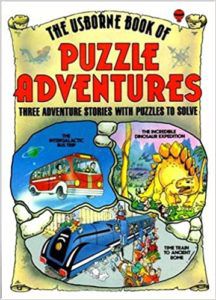 The Usborne Puzzle Adventures (as I knew them, though I understand from some research that they were also known as ‘Solve It Yourself’) were a series of slim volumes, each one a brightly illustrated story with a plot-based puzzle on most double page spreads. The reader could read along, solving the clues and digging for the right answer. In the back of the books were hints and solutions. These books had high stakes – people died right there on the pages, and the images were so striking that they’ve stayed with me long into adulthood.

It’s hard to imagine now that they held such sway in my young life, these slim volumes of adventure – Murder on the Midnight Plane, the Intergalactic Bus Trip, The Ghost in the Mirror and Search for the Sunken City. This was before the internet really kicked off as a concept, maybe in the mid 1990s. A few years later, I would get an allotted 15 minutes per night online, which seems archaic now but was the sad reality of the times back then. The internet wasn’t the interactive extravaganza we know now, and the purity and innocence of the puzzle book occupied me over and over again.

I recently took to the internet to try to get my hands on one of these books, and found myself a few days later clutching a pre-loved omnibus edition of three mysteries. I sat down for the first time in more than 20 years and solved the Murder on the Midnight Plane. What I hadn’t realised back then was these stories were mostly written by women, with names like Jenny Tyler, Gaby Waters, Karen Dolby. As a child I had no concept of this, but in adulthood it brings me great joy to know that these women had a place on many children’s bookshelves. I can find no obvious pictures of them, and their publishing histories are unclear and incomplete, which speaks to the fact that these mystery books were published in the 1980s, too early an era to consider ‘diversity’ as an aim or even an idea outside of activist circles. To a certain extent, their histories have been lost to time and paper.

Once I’d solved the mystery (the clues are easy but do require some work, some jotting things down), I started to think further and remembered a Famous Five book which featured a large amount of puzzle solving kit. I wracked my brains to remember the name, but eventually had to (again) take to the internet to find it, my inner child laughing at me all the way. I was thinking, it turns out, of Adventure Game Books, which I assume were popular in the 1980s and ’90s, but in truth I knew nobody else who had one, and I only had two, one of which featured a chap called Biggles who was so inherently British that I had no idea he was actually quite famous. Anyway, I digress.

What I had, as a young child, was The Haunted Railway Game, a paperback book which demanded that the reader use a series of code-breaking objects to get through a narrative, which had been broken up into paragraphs. If you passed a page, you could go to page 97, then to page 44, then to page 144, and etc. It was possible to get stuck and not finish – in fact, I remember finishing just once, but the paraphernalia of the book, the little torch card, the map, the compass and code book, the picnic cards, have stayed with me long after.

I suppose these things have been replaced by the Gameboys and Nintendo Switches, Animal Crossing and Stardew Valley. But there is a beat in my heart for those heady days of page-based entertainment and the endless satisfaction I got from their little tricks and nudges, their confident promise that I could work it all out if I just gave it some extra elbow grease. If only life were always so easy!