Even though the labels that surround the aromantic and asexual spectrum are fairly new, they provide a language for me to talk about things I’ve known about myself forever: I don’t experience romance and sexual attraction the way, I think, most people I know do. (It’s a matter of time and emotional intimacy for me and, in all honesty, a perfect long-term relationship with a “partner” would be something that errs on the side of friendship.) But because the terms and the discussions are still new, I find myself doing what I have always done as a brown girl reading books that inevitably featured white girls: I employ elaborate headcanons. Which isn’t ideal, but for where I am regarding this new/old discovery about myself, it’s a comfortable start.

There are, of course, texts that offer aro-ace representation so I don’t have to project onto characters, but sometimes these texts are much too subtle and some other times they simply don’t align with my own experiences. Neither scenario particularly bothers me, it is just to say that while I do love characters like Jackie from Welcome to Night Vale or those like Prunella from Sorcerer to the Crown, I’d prefer my list not to start and end with them. (There’s also the well-known Clariel from Garth Nix’s novel of the same name and Tori Beaugrand from Quicksilver by R. J. Anderson, but they are part of larger series which feel daunting to dive into right now.) And, thankfully, it doesn’t.

My first inkling that someone else out there might be experiencing romance differently (like me) came from The Bane Chronicles. I wish I could stop talking about this book and honestly, it’s not even that this book offers something unique—it is merely that I’ve read it often enough to develop headcanons for characters. The character that interests me is not Raphael Santiago—who Clare mentioned on Tumblr was asexual, before promptly killing him off—but Catarina Loss. Catarina stays in the sidelines, mostly cleaning up after her friends who have more than their fair share of heartbreaks to cope with. It’s a little unfair that her heroism and smarts make her perfect Protagonist Material, but her lack of interest in romance makes her “less interesting”. Or, at least not interesting enough to feature prominently in the series.

In a lot of ways this is what it feels like to be aromantic and asexual: you typically stand witness to other people’s “more significant” relationships. Again, not always a bad thing, but it is frustrating to know that not having a romantic interest makes you a secondary character somehow. Which is why I love characters like Nimona, the eponymous heroine of Noelle Steven’s debut graphic novel. Nothing about Nimona can be defined perfectly. She’s neither villain nor hero and neither human nor demon. I like pretending Nimona is somewhere on the aromantic spectrum, partially because I get an aromantic heroine in the process and partially because, there is no evidence to the contrary. Something in her past eats at her, but aside from that, she seems content to wreak havoc and hang out with her mentor. 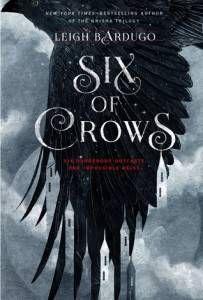 The other protagonist I like reading as demisexual (and possibly, quoiromantic) is Inej from Six of Crows. This one is a little tricky. The headcanon veers into problematic because it may imply that rape and trauma somehow “broke” Inej’s ability to experience sexuality and romance “normally.” I obviously don’t think that’s the case. There’s no question that Inej’s experience left her with lasting trauma that could affect how she navigates romance, but that does not necessarily make the label of demisexual a false one. 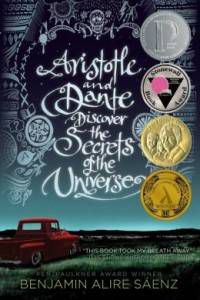 My last headcanon is similarly complex. I tend to read Aristotle from Aristotle and Dante Discover the Secrets of the Universe as being somewhere on the aro-ace spectrums. On the surface it is very much straightforward: Aristotle took the entire novel, the span of a summer, to realize that he loved his new friend Dante in a romantic/sexual way. But living, as Ari does, in a heteronormative and homophobic world, it is very possible that Ari went to great lengths to silence the voice inside him that dictated his romantic wants and needs. I do not wish my headcanon to erase the hypermasculinity aspect of Ari’s coming-of-age. However, by the same token, I think there is an expectation of overt sexuality ascribed to Latinx bodies. I think residing somewhere on the aro-ace spectrum allows Ari to subvert expectations of how a Latinx person would express romantic interest or sexual attraction. I am not married to this headcanon, but I do like the way Aristotle and Dante’s romance is built up over the novel. For the most part, it reads like a near-perfect example of what it would be like to give a romantic story arc to a demisexual protagonist.

Basically, as I said, these headcanons are a comfortable start. But nothing worthwhile stays comfortable. While reading into texts helps me figure things out for myself, the more I dwell on the characters’ identities, the more complex they become. Young as discussions on aro-ace identities are, there is a definite need for protagonists that provide varied examples of what “significant” can mean when used as a prefix for “relationship”.

Until then, if anyone needs to talk, I will be on Twitter and also immersed in Seanan Maguire’s Every Heart a Doorway.

*Hyphenation instead of “aro/ace” or “aroace” because it’s a “both, and” kind of situation. For me, at least.