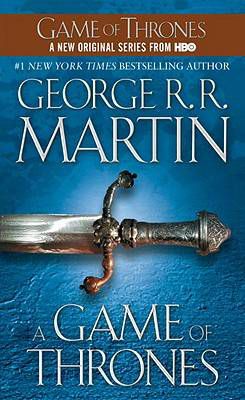 I recently succumbed to the hype and picked up George R.R. Martin’s Game of Thrones, the first in his Very Long And Epic Fantasy Series, A Song of Ice and Fire. It’s certainly a page-turner (something I think many literary fiction authors could use a good dose of) but, while I enjoyed it just fine, I do have a few bones to pick with the book.

Bones like this:
“Catelyn watched her son mount up. Olyvar Frey held his horse for him, Lord Walder’s son, two years older than Robb, and ten years younger and more anxious.”

I’m sorry, what? Is the son two years older than Robb or ten years younger? How can he be both? Am I just misreading this? What the holy hell are you saying, George? This happened more than once- sentences that were either so poorly worded as to be a bit incomprehensible, or else someone’s got a bad copy editor.

And this:
“In the Free Cities of the west, towers and manses and hovels and bridges and shops and halls all crowded in on one another, but Vaes Dothrak sprawled langorously, baking in the warm sun, ancient, arrogant and empty. Even the buildings were so queer to her eyes.”

Furthering the vague stereotype about fantasy books that in them, all things west are good and nice and (cough) white and all things east are icky and weird and brown and ancient in a dirty, Mordor-ish sort of way. Also, my name is George and I love conjunctions. See also: “Massive and slow and strong he seemed, dressed all in skins, with a club in his right hand and an axe in his left.”

And a few bones like this:
“For a small man, he had been cursed with a dangerously big mouth, he reflected as he crawled back to his corner of what the Arryns laughably called their dungeon.”

Wait- Tyrion is small? You don’t say! And he’s witty and sharp-tongued? TELL ME AGAIN. I DIDN’T CATCH IT THE FIRST 2,000 TIMES YOU SAID IT. I also didn’t catch that the hot water flowing through the walls of the Stark castle was like blood coursing through a man’s body- at least, not until you repeated the simile over and over and over. And over.

Let’s not forget this one:
“He drew the dagger and laid it on the table between them; a length of dragonbone and Valyrian steel, as sharp as the difference between right and wrong, between true and false, between life and death.”

As sharp as the difference between writing eye-rolling, over-wrought silliness and not doing that. But this is an epic! Every sentence must be FULL OF DRAMA. FULL OF IT.

Again, I’m not saying I didn’t enjoy the book. I appreciate the span of Martin’s epic world. He’s a great writer of villainous villains and sympathetic heroes. Daenerys, a victimized teenage bride-turned-dragon queen is a kick-ass female character if there ever was one. So am I being too picky (totally possible), or did anyone else out there also have qualms with Martin’s prose?