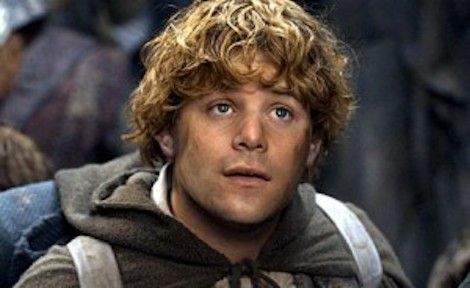 I was 12 when the movie version of The Fellowship of the Ring came out. At the time, I drank in the books during passing period and refused to tell the kid behind me how it would end.

My friends and I, gaga over the movies and bad elven fan fiction, found several different “Who in the Fellowship are you,” personality tests. As the rest of them became elves or men, Merry or Pippin, my result was the same over and over again: “You are Samwise Gamgee.”

When I was 12, there were only three things I wanted. One was to be left alone to work on my fantasy novel, another was to ride my grandmother’s horses, and finally, I wanted a boy to ask me to be his girlfriend. Preferably Alfredo, the hot guy in home economics who thought my embroidered dragon pillow was awesome.

But being Sam did not make me girlfriend material.

In the cafeteria during lunch hour, I was the butt of every homophobic fat joke a cruel junior high kid could muster. Still, the resemblance was there. Just like Sam, I am short and round; I have curly red hair and a fondness for good food. I still have a thing for horses, an obsession for good stories, and get a little too starry-eyed about things. And like me, he is also as socially awkward as a dad joke, as graceful as a baby seal on concrete and earnest to the point where it is almost insufferable.

Fortunately, just as the ring always gets cast into Mount Doom, the hellfire of belly shirts, low rise jeans, and middle school came to a merciful end. I grew up and read the Lord of the Rings Trilogy twice. And those three books have moved with me from place to place. Even today, they still stand watch over my bookshelves with the likes of Girl Through Glass by Sari Wilson, Loitering by Charles D’Ambrosio, a gilded copy of Jane Eyre and another ragtag company of books that changed my life.

In 2012, many long years after the end of the epics of both Lord of the Ring Trilogy and puberty, I was working a summer job at the Colorado Renaissance Festival as a serving wench when my friend Liz said to me, “I got a present for you.”

I stood in shock. There it was, me and good old trusty Sam somehow bound together again.

When I asked her about the pin more recently she said I was Samwise because I was “loyal, hardworking, optimistic, and the sidekick at the bar.” But she said I “never felt inferior about it.”

While writing this I went back and reread a several of the sections of the books. Yes, now Lord of the Rings makes me cringe because it doesn’t pass the Bechdel Test.  It also feels like some inside joke that in places where Tolkien just straight up stole stuff from Beowulf. I am also now leery of the Catholics I know who claimed the ring as a solely a metaphor for temptation and not one for blind power.  I still cheer when Treebeard takes down Saruman in a big middle finger to industrialism.

I am also still transfixed by the idea that Aragorn needs hands of a healer if he wants to be a good King. I still want to gallop over Rohan with the Rohirrim and want to chow down on my second breakfast with the Shirefolk.

I also now feel like I am going to blush with compliments at the idea of being called Sam. Because now, after 16 years, I understand that Samwise Gamgee, in all his chubby, hobbity glory, is still Samwise the brave. He is by far one of the least qualified members of the fellowship, and yet, with courage that comes from a place of sheer unquantifiable good, he stands up to foe after foe. Sam kills giant spiders, carries his best friend up Mount Doom, and in essence saves Middle Earth. Samwise the underestimated, Samwise the gritty, Samwise, the optimist, Samwise the quiet force.

I could argue for hours about how in many ways I have failed to be Samwise, how I am significantly more selfish, a bit more of a snob, and at times I fail to stand up for those I should. This shiny little pin with his name on it reminds me to do better, to stay myself, and to remember that I too can be brave.