In the eight years since I started the Lesbrary, a queer women book blog, it has expanded into a part-time job. I now make about 20% of my annual income through book blogging. It took a lot of trial and error to get here, though. I wasn’t able to find a lot of resources about monetizing book blogs, so I thought I would put together a post about what has worked for me, in case it can be of help to anyone else! Here’s how to make money blogging about books, beginning, of course, with how to start a book blog! 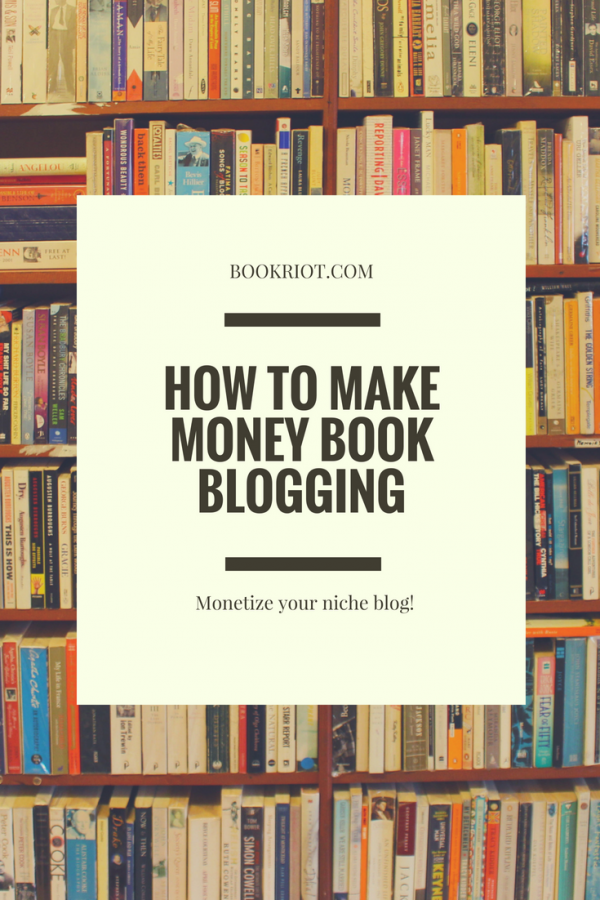 How to start a book blog

I’ll be honest, I’ve always been pretty proud of the Lesbrary’s brand. I know that anyone interested in my content will probably be intrigued just by the name, with no other explanation. It’s short, and it’s easily googlable! If you want to be able to be found online, you should have a name that you can quickly reach the top of the Google results page for. I also bought a .com domain and commissioned one of my favourite artists to make the official Lesbrary banner and logo, which made it feel much more professional.

I was blogging for years before I made any money doing it. Most blogs don’t last years. I’ve seen so many amazing queer book blogs pop up, deliver incredible content, and then disappear just as quickly. In order to monetize, I first built a solid base of content and followers, and I made sure that what  was doing was sustainable. When you’re getting started, it’s really tempting to pour out all of the great ideas you’re having—but that makes it easy to burn out. I try to stick to a weekly routine that delivers consistent content reliably. For the Lesbrary, that meant building up a group of reviewers. I now manage a team of more than 20 reviewers who all submit a review monthly. They get access to review copies, but none of us feel like we have to be reading and reviewing a book every day.

As much as the Lesbrary is the foundation of my online writing, the blog itself is not where I make most of my money. Instead, I see way more interaction on Twitter and (especially) Tumblr. I started a tie-in Tumblr (Bi & Lesbian Literature), which quickly became my first source of revenue. (More on that in the next point.) Tumblr and Twitter is where I can connect with people and have conversations. They’re where I can find new followers.

how to make money blogging about books

Now, into the actual monetization! My first source of income through book blogging was affiliate links, and it’s still one of the biggest ways I make money blogging. I originally used Indiebound, as an attempt to support independent bookstores, but I never made a dollar there. I quickly found out that whatever my personal feelings for Amazon were, they were the only affiliate links worth doing. People are far more likely to buy through Amazon than anywhere else—plus, anything they buy in the next 48 hours (after clicking your link) will also go towards your affiliate earnings.

I incorporated affiliate links by linking every book cover at the Lesbrary, as well as the first and last mention of the title in every post. Where I really started to see affiliate links working for me, though, was tumblr. Every time I mention a book on tumblr, I do an Amazon affiliate link. I do image descriptions on tumblr, and I link them there, too. That means that even if I’m just reblogging someone else’s content, if I have to add an image description (which I usually do), I have a chance to throw in an affiliate link. I am shocked at how well these do. Because tumblr posts are reblogged, they can spread far outside your followers. I never know when a post will explode—sometimes it’s someone else’s post that I’ve added a linked book cover to—but I will see the results in my earnings.

2) blogging outside of your platform

My second real source of income online was through Book Riot! Book Riot allowed me to write about bookish content that wasn’t relevant to the Lesbrary. Or that was, but it could get a bigger audience here. Book Riot also allows their writers to re-post their content elsewhere, after a certain time frame. That allows me to directly make money blogging by posting it on Book Riot, and then have that same writing later posted on my blog, to help build content there. Book Riot isn’t the only place to write online that pays, but of course it’s my favourite.

I was originally skeptical about starting a Patreon. After all, I’m not exactly an “artist.” I’m not writing stories—I’m writing about stories. Would anyone want to contribute to a Patreon for that? If you have developed a strong enough brand and following, though, Patreon can be a great source of reliable income. I didn’t start a Patreon until I had more than 10,000 tumblr followers, and it still took years before I was making more than $100 a month. Having that reliable income is fantastic, though, and it is slowly growing. I incorporated a monthly giveaway on my Patreon, which I think helped with incentive. I wouldn’t recommend starting a Patreon lightly, though: the launch is very, very important. Definitely do your research, seek out similar Patreons, and build a launch plan first. Rewards make your Patreon way more appealing, but again, make sure it’s sustainable! Don’t set a goal or offer a reward that you’re not sure you would be able to do consistently—even if it seems unlikely that you’ll ever get a Patron at that level or that you’ll ever meet that goal.

It was only in the last year or so that I started advertising at the Lesbrary. Something like Google Ads gives you money solely on how many clicks or views you get, and the ads are unlikely to be related to your content. I find those sort of ads tacky, and I would be making very little money on them. If you have a niche blog, you may not have a giant following, but those followers are far more likely to buy a relevant product. So I decided to go with direct advertising. I researched the prices that ads on similar sites went for, and I also thought about how much I would need to make before it felt worth it to deal with ads.  I talked with an author friend about putting up some (free) test ads to see how many clicks they got, and to practice formatting them. I then reached out to the authors and publishers who I had built a relationship with over the years. These are the people who consistently send books for review, and who are big names in the queer book world. I put up a tab in the menu that read “Advertise with the Lesbrary” and I posted about it, both on the site and on tumblr. At first, I got a few ads. Soon, though, I sold out an entire year’s worth of ads on my top two slots. I quickly realized I had underpriced them, and adjusted the prices up until ad sales seemed to level off.

My three main sources of online income are Amazon Affiliate links, Book Riot, and Patreon, but I do make a little bit of money from ads and elsewhere. I offer sponsored posts/critiques, for one. I’ll often go six months without getting any requests for sponsored posts, then I’ll get three in the same month. I’m always on the lookout for more ways to bring in a little bit of money online, because it means I can spend more time doing what I love: writing about books!