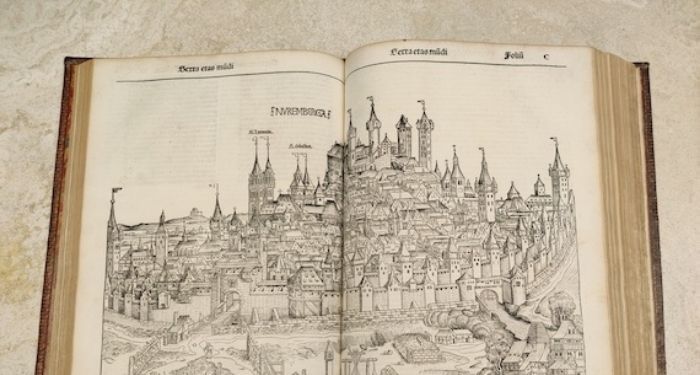 On April 13, 2021, the Guinness Book of World Records designated Attack on Titan (Shingeki no Kyojin) as the largest comic book published. Published by KODANSHA LTD in Japan, this manga is a whopping seven feet long (taller than me by two feet!) and weighs 30 pounds. My dog weighs slightly more. According to the Guinness Book, it was made “to promote the final 34th volume of the series in book form, which will go on sale in June 2021.”  That’s quite a way to celebrate the end of a print run!

Last month, when I wrote about published miniature books, books about three inches tall or less, I became fascinated by the exact opposite — the largest books printed. By which I mean, largest book by surface area of the pages, not longest book written or book with the biggest print run. (There’s totally Guinness records for those as well). So here’s an exploration of gigantic books.

How Big is Big?

Unlike miniature books, there’s no real strict definition of a really large book. We obviously have larger books out there like coffee table books or books that might be stored in oversized sections of libraries. I mean bigger than that.

For me, when I think of really large books, I think of John James Audubon’s The Birds of America at the Field Museum of Chicago. It’s filled with astonishing illustrations of birds. Block Club reported in 2019 that the Field Museum’s book is 39 inches long and 26 inches wide and is 2.5 inches when closed. The four volume set is so big that it resides in the Audubon Ottoman and only a page is turned once a week. Three people are needed to open the glass case, reported Block Club.

CNBC reported that in 2004, four college students’ attempt to steal the Audubon book from the special collections of Transylvania University was foiled because each Audubon volume weighed 50 pounds. They managed to get away with lesser valued books but the books were too big to steal by hand.

Dr. Suzanne Karr Schmidt, curator of rare books and manuscripts at Newberry Library, noted that they have 18th century choir books that require two people to move them.

Of course,  she said, “The bindings were done after the book. It’s a personal taste.” Books with trade bindings were not common until the 19th century. Thus the size of books was not consistent like it was today. Books were very expensive so oftentimes only the wealthy had them and could afford to bind them how they liked. For instance, margins of books might be cut down to fit the book into a smaller shelf. Or highly decorative covers would be made.

Why Were These Books Made?

If you print a big book, you can pack a bigger visual punch, explained Dr. Karr Schmidt. With the Audubon book, there’s more detail that can be seen in the illustrations of birds.

She also cites the Nuremberg Chronicle (also known as the Liber Chronicarum or Die Schedelsche Weltchronik), as another example. While it’s only 18.5 inches tall, the books were printed in 1493. So that’s impressive given that printing in the western world was in its infancy. They are incunables, which are books printed before 1500. The Newberry has four copies — two in German and two in Latin.

The book tries to present history up to the present day (1493). It starts with Garden of Eden in Genesis but also records natural disasters throughout history. It contains over a thousand woodcuts including full spread cityscapes and landscapes (though a few cityscapes appear to repeat).

“It’s trying to situate you in places and time going all the way back to the beginning,” Karr Schmidt explained. There’s also images of historical figures (but Dr. Karr Schmidt noted they may not be the most realistic depictions). The size allowed for better detail and more information to be collected in the book.

The larger size allowed for better legibility. The 18th century choir books are a great example. “If someone needs to be able to read something on a broadside on the wall or or music from across the room or even in a large group around the book, then being able to pump up the font size is necessary,” Dr. Karr Schmidt explained. Given that printing books was expensive for many centuries, it’s unlikely that churches had the budget to buy individual choir books. Reading from a single book makes so much sense.

Printing Large Books From Then to Today

But as we noted in the introduction, these gigantic books are still being made today. The Guinness Book of World Records gave the Largest Book Printed to The Little Prince in 2007. It was printed by Ediouro Publicações in 2007 for the Biannual Book Fair of Rio De Janeiro. It was 6 feet 7 inches high and 10 feet 1 inch wide. But it’s likely more of a publicity stunt or doing it for the sake of doing it. The same publishing house debuted the largest searchword puzzle at that book fair as well.

Of course, printing the book in the 15th century or the 21st century still presents challenges. Dr. Karr Schmidt explained that you have to have a press big enough, paper large enough and the type. Digital printing might make it easier (compared to setting type, etc.) but it’s still a challenge to print it out and bind it. (Full disclosure — the 18th century Mexican choir books at the Newberry were handwritten but the example is too good not to include).

That’s just a taste of the largest books (mostly) printed. Next, check out the story of miniature printed books, as well as the typo-ridden psalm book that went for $14.2 million at auction.