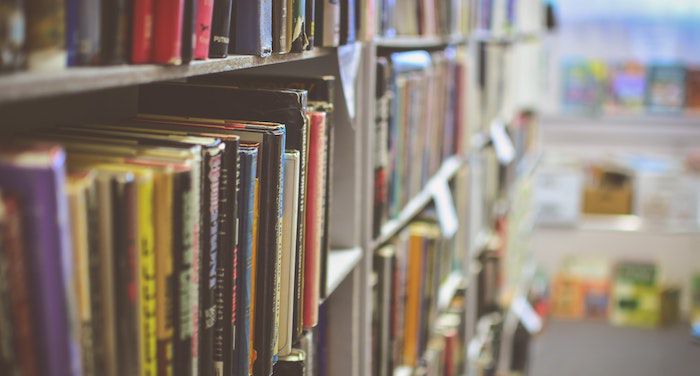 This content contains affiliate links. When you buy through these links, we may earn an affiliate commission.
The Good Girl and The Other Mrs. by Mary Kubica, from Park Row Books 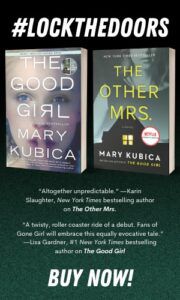 Two addictive reads for fans of twisty psychological thrill-rides from New York Times bestselling author Mary Kubica.
The Good Girl
What seems like a safe one-night stand turns out to be the worst mistake of Mia Dennett’s life. A tautly written, compulsive read that reveals how even in the perfect family, nothing is as it seems…
The Other Mrs.
Meet Sadie and Will Foust, the new couple in town. When their neighbor is murdered, Sadie is drawn deeper into the mystery, but the more she discovers the more she realizes how much she has to lose.
#LockTheDoors

There is a single story that truly seems to define me this past year. I can’t stop telling it. In 2017, I got my dream job in my local elementary library. This summer, COVID cutbacks meant the position was eliminated, and as quickly as it came, the dream job was gone. It’s a lot less than the loss some of my friends and neighbors have suffered, and knowing that doesn’t make it hurt any less. I wrote recently about ways I’ve been trying to keep my librarian spirit alive while separated from the media center I love. The conscious effort to engage with bookish things helps! But lately, I’ve been finding myself thinking like a librarian, no dress up required.

Below are several titles that I’ve been viewing with an elementary librarian’s eye. Even when collection development is on hold, I keep discovering books that I know belong in the hands of my K–5 students. I don’t know if I’ll ever be in position to order books for an elementary library again, but nothing can stop me from seeing a book and picturing the perfect reader in my mind’s eye. 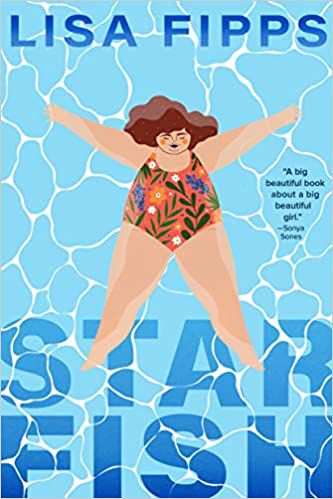 I was lucky enough to get a sneak peek of this title before it was published, and I wanted to put it in our elementary library so badly that it hurt. Ellie is fat and relentlessly bullied for her size. Her biggest tormentor? Her mother. With the help of a talk therapist, Ellie realizes she does not deserve this treatment (an extremely difficult first step) and begins to stand up for herself. A book that is accessible for kids that directly calls out fatphobia? YES PLEASE! Even though my students are in grades K–5, many 4th and 5th graders read middle grade titles, and the earlier this message gets out, the better. I wish this had been in my library when I was child. 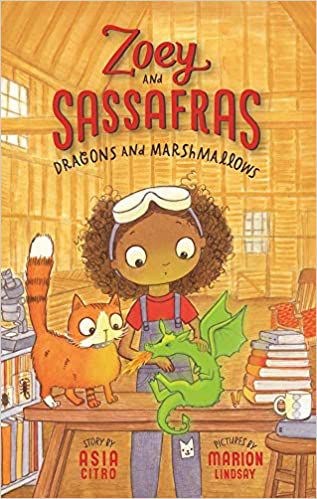 Dragons and Marshmallows: Zoey and Sassafras by Asia Citro

This early chapter book science/fantasy series is bringing me so much joy of late. Zoey is an experiment-loving cat owner with a mother who has instilled in her a respect for the scientific process. Zoey also shares her mother’s ability to see the magical creatures in the forest behind their house, who often flock to their science lab in the barn for medical assistance. I started reading these with my 8-year-old son at a time when remote learning fatigue made getting him to do ANYTHING academic quite the feat. We enjoyed them so much that they became a read aloud series for my own 1st grade class. With several titles full of scientific gems and mystical creatures, I know this series will outlast “these unprecedented times.” If I’m ever ordering for an elementary library again, these titles will definitely be on the list. 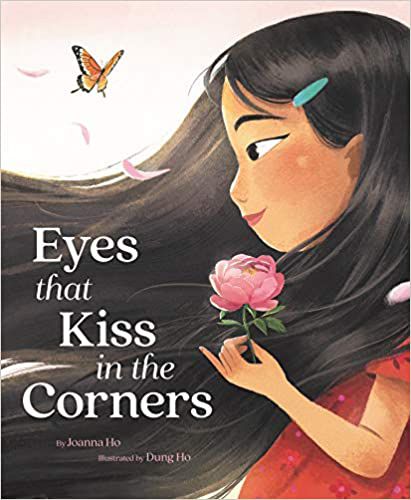 This book is beautiful and came out at a time when I really wanted to be showing my students beautiful things.  Hair Love and Princess Hair are two titles I’ve really loved sharing with my students, several of whom are Black and relate to the characters celebrating their hair styles in those books. I love that this title celebrates Asian features with poetry like “lashes curve like the swords of warriors” and “eyes that glow like warm tea.” There is also a lovely matriarchal thread of how the main character’s eyes look like her Mama’s, her Amah’s, and her treasured little sister’s. In a time when misguided people cling to the idea that they “don’t see color,” children’s literature that celebrates a range of physical differences is a must in an elementary library. 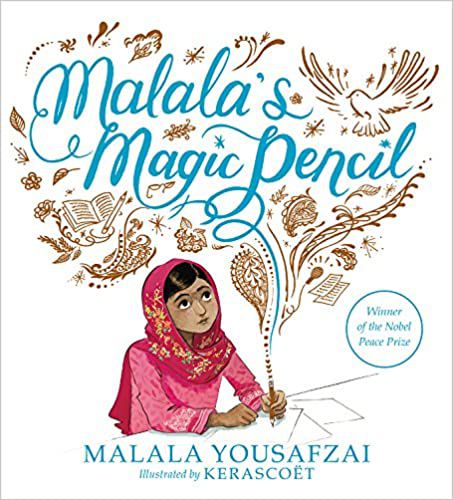 This one stings a little. My beloved coworker, space sharer, and forever friend was the art teacher when I was in the library. We had planned a collaboration lesson using this title, dreaming up artwork showcasing what each student would do with their magic pencil. The world fell apart before we could put the plan into action, but the book is still deeply engaging, even without an accompanying project. Malala’s story is so important, reminding students that young people can make an enormous impact, and that standing up for what is right is a magical act of bravery. There are a ton of great books about Malala, but this one is written by the woman herself, in accessible language that is great for sharing the story with younger readers. 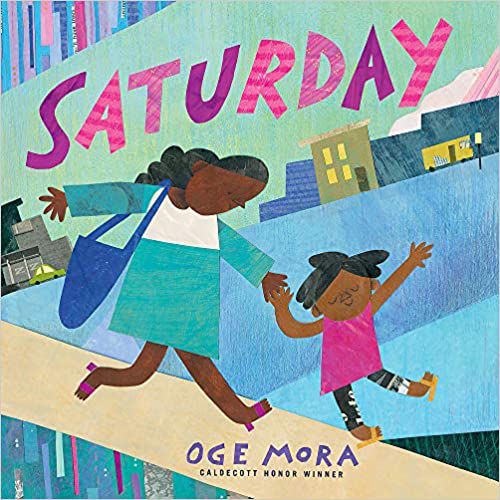 Oge Mora shot to stardom in my elementary library when her debut picture book won awards in the 2018 Youth Media Awards show. We had featured Thank You, Omu in our mock Caldecott, and the kids were so excited to see a book we had considered on the big screen.  Her follow up, Saturday, is equally charming with a family centered lesson that works on so many levels. Most importantly, the repeated text coaches students to deal with disappointment by taking deep breaths and verbally reassuring themselves. All of this goodness topped off with punchy, colorful collage illustrations makes it a perfect read aloud, in COVID times and beyond. 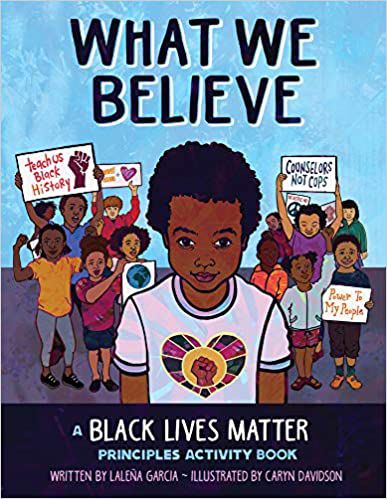 What We Believe: A Black Lives Matter Activity Book by Lalena Garcia and Caryn Davidson

When selecting books for the library, my students are not the only population I’m considering. I often have an eye out for texts that can support the teachers in my building. What We Believe was an instant purchase for myself, and as I dug into the book and heard Lalena Garcia speak, I knew that this book should be in the hands of more early educators. While most people understand that anti-racist education needs to be promoted in schools, there is often pushback and insistence that explaining Black Lives Matter is too difficult or tricky for the youngest students. Not so! Garcia has designed an activity book that helps dismantle this false stumbling block. Buying this book is not a quick fix: it’s a lot of work to teach these concepts authentically. Still, the work is necessary, and artfully presented by Garcia in this book.

Each of these books intrigued me as a human and fulfilled the parts of my heart and brain that reside in the elementary library, no matter my actual role in my school. I was so proud of my librarian title and still mourn for that particular job. However, as long as I see a book and instantly picture the perfect reader, I feel like I didn’t actually leave.