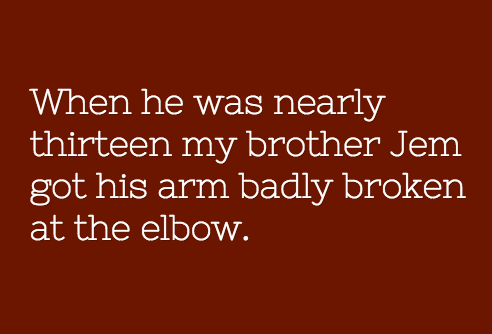 What follows is a lengthy discussion and analysis of the first line of To Kill a Mockingbird. It is one of the most famous first lines in all of American literature, not only because To Kill a Mockingbird itself is so widely-read, but also because the sentence itself captures much of the deceptive simplicity of the novel. For my part, I think of close reading not as something that seeks to come to any sort of definitive reading, but rather functions to open doors of thinking. That’s my favorite part at least. Anyway, let’s take a look.

When he was nearly thirteen my brother Jem got his arm badly broken at the elbow.

My usual tactic in doing close readings of opening lines is to pretend that I know nothing else about the book. With To Kill a Mockingbird, this is more difficult than usual, largely unnecessary, and, given the sentence itself, counterproductive.

That’s not to say, however, that looking at the sentence as if you don’t know the rest of the book isn’t useful though; it’s just only one part of the story. But it’s the part of the story that comes first. Extraordinary opening lines do three things to orient a reader: give information, establish tone, and show perspective. Here, Lee does all three with almost unprecedented concision. With only 16 words, we learn a little and feel quite a bit more.

Broken arms are not an uncommon trauma for kids, but we can sense already that this is more than a fall from a bike or a pick-up game injury. It’s the passive voice: “got his arm broke.” We know, even as we don’t know we know it, that the usual construction for an accidental break would be something like “my brother Jem broke his arm very badly.” Even in accidents, we place the agency for injury on the injured party, presumably because while it is probably some combination of gravity and a hard object that did the work of breaking, it was the injured person’s carelessness that caused it. Not so here.

No, we know that someone broke Jem’s arm. And that the arm-breaker’s identity is withheld makes the injury all the more ominous.

We know three more pieces of information here: Jem’s name, his age, and that he is the narrator’s brother. Let’s take them in order. First, isn’t Lee great with names. Atticus, Boo, Scout, Jem. Strange enough to be memorable, but not so peculiar as to be wholly foreign. Second, what to make of “nearly thirteen”? Why not just twelve? It could be that Scout, whom we don’t know anything about at this point, possesses the child’s granular accounting of age, when being almost an age is as good as being it.

But we are in the narrative past here, and I think we know only a dozen words in that this is a story of memory. It seems to me rather that the age is a meaningful one. Thirteen. A prime number. The number that not only stands in for sexual maturity, but is itself the transitional number between the uniquely named one through twelve and the standardized naming of thirteen through, well, infinity. So “nearly thirteen” is a transition within a transition. Jem is on the cusp of being on the cusp. “Nearly thirteen” is the break between childhood and adolescence, and Jem’s coming of age is more violent than most. That he is nearly thirteen when his arm is broken suggests that he is still healing on his thirteenth birthday, and so Jem’s thirteenth birthday serves as a dividing line between the events of To Kill a Mockingbird and the Finches’ later life.

It even functions as a transition in the sentence itself, separating the opening modifying phrase “when by brother Jem was thirteen” from the independent clause “my brother Jem got his arm broke very badly.” The thirteeness of To Kill a Mockingbird runs deep, even to the point that I think thirteen might just be the perfect age to read the novel. (Note: To Kill a Mockingbird unexpectedly has only the second best opening line involving the number thirteen. My vote for the top spot would go to George Orwell’s 1984: “It was a bright cold day in April and the clocks were striking thirteen.”)

I’m going to switch for a moment here to an analytical perspective that knows the rest of the story, and so knows that the breaking of Jem’s arm is the climax of the novel. While the courthouse scene is perhaps the most iconic moment, it isn’t the central event for the Finch family. This bears repeating. To Kill a Mockingbird isn’t Tom Robinson’s story: it is the Finches’ story in which Robinson’s trial and conviction is the inciting incident and in which Bob Ewell’s attack and subsequent death is the denouement. The importance of how the story ends is foreshadowed here at the beginning. It is the Finch family’s trauma that frames the story, not racism or social conciousness. This is can be difficult to see through the fog of Lee’s legacy, the book’s deployment in English classes, Gregory Peck’s white suit, and the rest of the To Kill a Mockingbird industry. But it’s right there from word one.

In fact, while we don’t know it at this point, Lee makes the unusual choice of beginning with the climax without even giving us a clue that what she is telling us is all that important. The second sentence even tells us that break has no long lasting impact on Jem, and it would seem that the task of memorializing the events of the novel falls to Scout alone, and her position as witness and reporter, as “scout,” is established by the very first word, one of the six cardinal words of journalism: “when.”

A few even more uncollected thoughts:

1. Two adverbs here: nearly and badly. Perhaps badly could go, but as I think I argued above, nearly cannot. So keep that in mind the next time you are reading writing advice that excommunicates adverbs from the congregation of style.

2. I always forget about Jem when thinking about To Kill a Mockingbird. Why is that? Or put another way, why does Lee choose to have Jem’s arm get broken rather than Scout’s? Why doesn’t Jem die? So that Boo Radley can be recognized as something other than merely a ghost? These are all questions beyond the scope of a close reading of these lines, but my favorite effect of performing close readings is that it gets me to think about elements of a work that I have not considered before.

3. Would it be too curious to consider that even the choice of elbow is meaningful? It’s worse to break than a wrist, though not as bad as a leg or knee, right? Perhaps it’s just that seen against Tom’s conviction or the specter of mob violence, a broken elbow seems so benign. Perhaps though that seeming innocuousness is part of how Lee seduces here, how she slowly and confidently introduces us to the story. We are dealing with a story about violence, but she comes at it slant, and so we come into it uncarefully ourselves. Like all good storytellers, Lee knows she doesn’t need to rush. That’s probably what strikes me most in thinking about her style here. It’s so wonderfully unhurried. Unlike most people with an exciting story, Lee, hands in her overalls, fairly mozies.