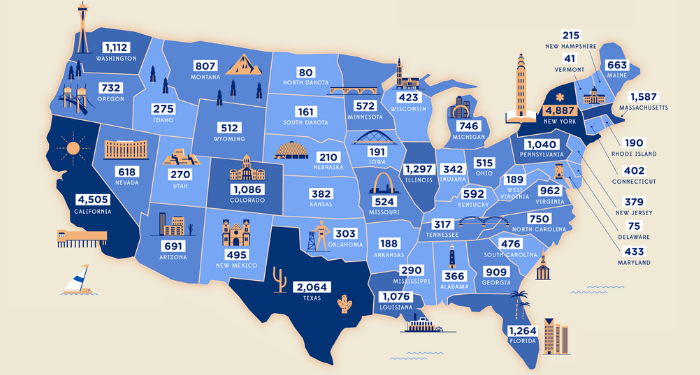 The setting of a book can play a massive role in its tone and memorability. The best authors can bring a place to life and make the story feel much more real because of it. That means that the choice of where to set a book is crucial. Many authors simply set their books where they live, drawing on their day-to-day lives for inspiration. Others find locales that match the plot or feel of the story: noir set in California vs New York, for instance, account for two distinct subgenres.

So what are the states that draw in authors, and which ones are sorely lacking literary representation? You can place your guesses now (sheer population size is a good place to start), but Crossword Solver has done the work of tallying up all the U.S. location tags on Goodreads, so let’s dive into their results.

Unsurprisingly, New York takes the number one spot with 4,887 books, and more than half of the books set there take place in New York City. California gave it a run for its money with 4,505 books set there. It has a slightly bigger spread of cities featured, though, so taking out the books set in every state’s most populous city would put California at the top.

Crossword Solver also pulled out the city in each state where the most books are set. Again, New York City is the champion, as I’m sure you’ll be shocked to know. Other popular cities to set books in include Los Angeles, Chicago, New Orleans, and Boston.

Not all cities attract the same kind of author, though. Some towns are destined for horror novels, while others are the perfect place for a fantastical story. Before you keep scrolling: can you guess the city that has the highest percentage of mystery books set there? What about romance novels?

Some cities are typecast for certain genres, and Bisbee, Arizona is a mystery town. 81% of the books set there are mysteries, including Desert Heat by J.A. Jance. Personally, I’d be a little nervous living in a town that seems destined to be the backdrop of a murder mystery.

In retrospect, it makes sense that Washington, D.C. is especially likely to be home to a thriller. Political thrillers are a common subcategory, and what better place to set an American political thriller than its capital? One of the most popular examples is Deception Point by Dan Brown. New York is also a popular thriller locale, with three of its cities making this top 10.

Looking for the most romantic city in America? According to romance novelists, it may just be Bloomington, Indiana. 93% of the books set there are romance novels! One of the most popular is Redemption by Karen Kingsbury. The second place goes to Lancaster County, Pennsylvania. Both locations have a large Amish population, so it’s likely the Amish romance subgenre that’s put them in the top spots. Did you know Flint, Michigan is a romantic setting too? 82% of the books set there are romances!

Which American cities come to mind when you think of fantasy novels? While many fantasy series take place in other worlds, some place their magic in our world, hidden around the corners of familiar buildings. Blue Ridge Mountains, Arizona* must give off a magical aura, because 31% of the books set there are in the fantasy genre, including This Side of the Grave by Jeaniene Frost.

Sci fi often takes to the stars for its settings, but it can also take place on a future Earth. If you want to visit a place that’s got one foot in the future, check out Sedona, Arizona, where one in four books set there is a sci fi story, including River Rising by John A. Heldt.

*Editor’s note: the creators of this infographic identify the Blue Ridge Mountains in Arizona. We’ve kept the error, but know that range is located from southern Pennsylvania through Maryland, West Virginia, Virginia, North Carolina, South Carolina, Tennessee, and Georgia

If you don’t live in New York or another big city, it can be hard to find books that take place nearby, so Crossword Solver compiled the data they collected to show the books set near you! Just input your zip code to get a list of books in several genres set near you.