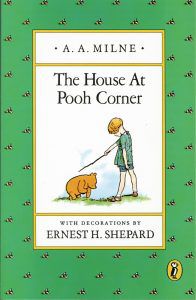 I believe that The House at Pooh Corner by A.A. Milne should have a warning sticker affixed to its cover. The sticker should warn parents that if they are the least bit mournful that their child is starting preschool,  kindergarten, or even college, then they should avoid the last chapter of the book entitled “Chapter Ten: in which Christopher Robin and Pooh Come to an Enchanted Place, and We Leave Them There.”

Recently, I was that parent. My son, James, started junior kindergarten at the school where I teach. I have been waiting for this year since James was born. Knowing that he is receiving an excellent education, being able to see him throughout the day, and the convenience of bringing him with me to school and leaving with him at the end of the day are like sprinkles on the top of a cupcake for a working mom.

On the first day of school, James donned his uniform, lugged his own tote bag, gave me a hug, and calmly joined the other new students in line. While I should have felt as satisfied as Pooh with a full pot of honey, I felt as deflated as Eeyore when he loses his tail. In his blue polo and khaki shorts, James quickly blended in with the other students. My baby disappeared in front of me!

Throughout the first week of school, I disappointedly felt like I needed a good cry. Tears threatened to drip while I read my class such back to school classics as Chrysanthemum and The Kissing Hand. A lump formed in my throat as I made school lunches and folded uniforms in preparation for the next day of school. My emotions buzzed around my head like bees who feel their honey is threatened by a little black rain cloud.

One evening as I put James to bed, I glanced at his bookcase and noticed the light from the nightlight reflecting off of the white spine of The House at Pooh Corner. I remembered the last chapter in the book and realized that reading a story by A.A. Milne, a parent in a similar situation himself, could help me feel better. If the warning sticker had been there, it would have gone unheeded! 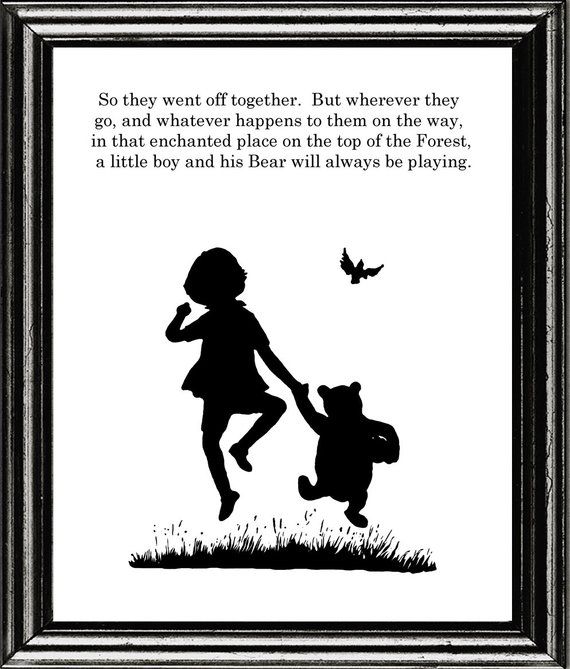 Purchase this print from A Pretty Little Picture

The chapter begins by stating, “Christopher Robin was going away. Nobody knew why he was going; nobody knew where he was going…But somehow or other everybody in the Forest felt that it was happening at last.” My own small son was going away, too. Not to a boarding school or even a school that required a bus ride, but he was still starting a life away from his father and myself and it was happening at last.

As the story continues, Christopher Robin and Pooh take a walk to an enchanted place (a special place at the top of the forest) and Christopher Robin says, “But what I like doing best is Nothing…It’s when people call out to you just as you’re going off to do it, What are you going to do, Christopher Robin, and you say, Oh, nothing, and then you go and do it.” Christopher Robin laments that when he goes to school, he will not be allowed to do Nothing any more. As James grows, he too, will do less Nothing. Lazy mornings of snuggling in bed, walks through the neighborhood collecting sticks, and evenings where he wears a hooded towel and watches the water in the bath tub drain will one day come to an end.

While holding hands, Christopher Robin earnestly says, “If I—if I’m not quite…Pooh, whatever happens, you will understand, won’t you?” Pooh queries, “Understand what?” Christopher acknowledges that he, like all children, will leave The Hundred Acre Woods.

I read this last part and finally indulged my tears. After the much needed catharsis, I felt a trifle better. A.A. Milne and other parents before me witnessed their children growing up. We will always have the memories of when they were small. Milne ends the books by writing, “So they went off together. But wherever they go, and whatever happens to them on the way, in that enchanted place on the top of the Forest, a little boy and his Bear will always be playing.”