Indra Das has done what I never suspected any cis writer could.

I should preface what I’m going to say by writing that it is not that I believe cis writers of fiction should not write trans characters—I don’t. I did once. I don’t mean to disagree with the many trans writers of fiction do believe this, but I believe personally that one of the most noble pursuits of fiction is to imagine lives completely unlike ours with depth and sensitivity, without ever letting our egos tell us that we could replace the voices that tell those lives for themselves. That said, most cis writers imagine trans lives for a very few standard and tropey reasons. They need to make their cis characters’ lives more complicated, and a trans life provides the drama for that. They want a symbol for the search for self, and a narrative focusing on transition provides that. They want to be edgy and current, and trans narratives are in the spotlight. What seldom, if ever, happens when a cis writer writes a trans character is that they want to present a fully fleshed out character whose existence is not a trial, or a joke, or a trick.

That said, writing a gender reveal is often even more terrible ground for the worst of cis writers to tread. Though I’m sure many cis people think of Silence of the Lambs as the tour de force of Anthony Hopkins, and the horror film that contained two memorable villains, I don’t know any trans person who can talk or think about it without referencing the scene where Buffalo Bill dances in the mirror, dressed in women’s clothes, and we see a tucked penis and recall the gatekeeping doctors that wouldn’t let the character have genital reassignment surgery. Many trans people who grew up in the ‘80s like me recall the scene near the end of Sleepaway Camp where it’s revealed that the villain was a boy forced to live as a girl by a mentally ill aunt—a reveal that happens in the form of a raised knife and an exposed penis. The gender-reveal-as-shock trope is firmly entrenched is cis writers’ minds as a valuable and subversive plot device, with little thought to the larger-than-life terror it wreaks on the trans lives it steals from. 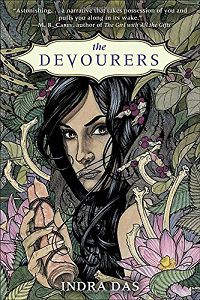 Indian writer Indra Das was treading on delicate ground when he made a choice as a writer to have one of the main characters in his novel The Devourers make moves towards transitioning genders near the end of the novel.

The werewolf novel set in both historic and present-day India deals largely with ideas of identity and true self. Most of the exploration of these themes comes from the werewolf characters, upon whose true bestial form (“second selves”) humans cannot lay eyes. Their human forms are amalgams of the humans whose lives and spirits they have consumed. This is, ostensibly, far more what the book is about than transness.

The stories of the werewolves are translated from flesh scrolls handed off to a scholar named Alok. We know that Alok was once engaged, estranged from both a former fiancé and family, and of ambiguous sexuality. However, it is not until the last pages of the book that Alok buys a saree and learns to dress in it from internet instructions, and begins to grow their hair out.

“I pass for someone who is not a man, who is not merely Alok. No, in those moments, I am not merely Alok. Not a second self, but a self, my self, one I’ve been afraid to let breathe for so long. One who drove my parents to remoteness. One who Shayani [Alok’s fiancé] couldn’t live with, breaking both our hearts. One I long to be in front of them all one day, their fear be damned.”

Not a second self. Not a quest for self. Not a trick, not a foil. A gender reveal that does not aim to shock, but to deepen a sensitively explored and beautifully written theme—those that live among us, be they human or inhuman, whose truth is too much for some eyes to fall on.

What is more is that the transition is not something Alok struggles with through the novel, it is not a spectacle, it is not the focus. The focus is the translation of the scrolls recounting the lives of the werewolves that are handed to them by a mysterious stranger. The gender reveal is a natural end to a story it fits into perfectly. There is nothing exploitative; unlike many gender reveals, this one focuses on growing out hair, gently wrapping oneself in new clothes—not body parts and shock. What’s more, is that when Alok comes out near the novel’s end, we have already met the character fully. We know all about Alok as a fleshed out human being.

I spoke to Indra Das via email, who said that Alok developed as a natural part of his exploration of the themes of early drafts. “I asked a variety of questions of my older pieces: why so many men? why rape? why one female character who exists only to be violated by masculine-coded monsters so that they can grapple with the monstrosity of the mythology that is patriarchy? That the frame narrator would be a character who investigates their own transgression of the boundaries drawn around gender, sexuality and identity by the restrictive narratives of toxic patriarchy made eminent sense.”

Das went on to say that while he does not identify as a trans or queer person, “I do strongly empathize with growing up in denial of my own sexuality (deeply internalized because of Indian/Bengali cultural shame around sex) and rejecting the norms and mores expected of gender conformity (I was always confounded by the things expected of me because I was a boy, always wondering why there was such an unpleasant divide socially encouraged between girls and boys). I definitely channeled my own denial and shame-ridden sexual development in writing Alok’s denial.”

This using of one’s own experience to channel the experiences of another is empathetic writing at its peak. By not viewing the character Alok as “other,” Das manages to avoid what are typically thought of as the traps of writing “the other” in fiction.

Many of the trans writers I know are obsessed with other worlds, or with ghost stories or near futures that involve this world with much different rules. Samuel Delaney spoke to queerness’s release in the form of speculative fiction when he said that for those of us pushed out to the margins of this world, imagining other worlds is a vital exercise. This idea that is so gracefully explored in Das’s novel, this tender, beautiful, alliance between those of us who many feel do not exist and mythology is one of the ultimate things ever written by a cis writer about the trans experience.