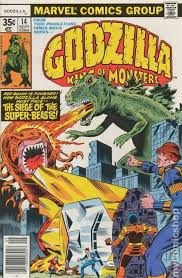 This is a guest post by Brad Ricca. He is the author of Super Boys: The Amazing Adventures of Jerry Siegel & Joe Shuster – The Creators of Superman (St. Martin’s, 2013) and American Mastodon (Black Lawrence, 2011), winner of the St. Lawrence Book Award. He is a SAGES Fellow at Case Western Reserve University and he writes a comics column called “Unassuming Barber Shop” for www.comicsbeat.com. Visit www.brad-ricca.com and follow him on Twitter @BradJRicca. My first comic book was a Godzilla #14. They were giving away old comics at my local Drug Mart and this was my luck of the draw. During the ride home in the station wagon, I was already cherishing it. I studied the colorful cover that said “35₵” and “Siege of the Super-Beasts!” in bright yellow. It was dated “Sept.” under the important-sounding banner of “Marvel Comics Group.” The pinkish “remaindered” stamp on the cover meant nothing to me.  Though it didn’t say exactly what it was, I knew exactly what it had to be: a comic book.

That was a long time ago. Since then, comics have, in many ways, grown up along with their audience. We now stitch our comics into handsome cloth bindings and call them “graphic novels.” Or we buy them as whole storylines in colorful, digitally-colored “trade paperbacks.” Of course, you can still get them in their original form, in what some term “floppies” or “pamphlets.” As the medium moves to digital platforms, some just call them “issues.” Even Art Spiegelman, the creator of Maus, wants them to be called “comix.”

There is considerable debate, from scholars and fans, over what to call these things. That there is argument at all is testament to the range of interpretations that these works engender. But I read comic books.

When I got that first comic, it wasn’t Godzilla’s atomic breath or the giant severed robot head on the cover (ok, that didn’t hurt) that got me hooked, it was the experience of taking this small, colorful artifact, this gift, up into my room, jumping onto the bed, and getting lost in a story about monsters from the moon. And I didn’t want it to end. With every stiff page I turned, the end loomed larger and darker and more finite. To keep it at bay, I even read the ads. This was my first comic, but I recognized this experience immediately: I was reading a book.

Comics – images and text working together to create a meaningful narrative – aren’t the issue; comics are a medium. So you can call it graphic, comix, or even my dad’s favorite term (which we did not adopt) “funny books.” That first word isn’t important, but the second one is. A comic book was thin enough to fit between the folders of your Trapper-Keeper. It could be rolled, flattened, and could grow in stacks on the nightstand. A comic could be started, stopped, and re-read a hundred times in a row. As far as the experience goes, as a vessel for reading, a comic could do everything a book could – and with Godzilla, no less. I remember that when I finally reached a total of fifty comics in my personal horde, I sat there for a moment on the shag orange carpet, stunned. Did I have a problem? I wrote “50” in blue pen on the lid of my white cardboard box and circled it.

Category ID: 18121
Category ID: 1074
Category ID: 471
The Stack Newsletter
Sign up to The Stack to receive Book Riot Comic's best posts, picked for you.
Thank you for signing up! Keep an eye on your inbox.
By signing up you agree to our Terms of Service

Comics can be literary – or not. They can be complicated and artistic – or not. All of that is debatable. But their nature as books is not. In denying them that word, we deny the experience that was, and is, shared by so many: that experience of sitting down with something that you have to read, flip through, and think about in order to turn on; not the other way around.