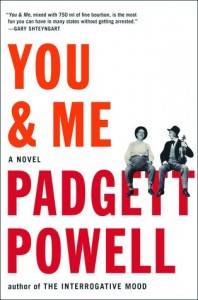 You & Me by Padget Powell

In some book reviews, the writer reveals too much about herself and too little about the book she’s meant to illuminate–but I beg your indulgence so I can share a personal story that I believe to be relevant. I once knew a Southern man whose family obligations and level of education did not work well with his personal inclinations and ambitions. A reluctant and long-nagged husband, loving but muddled father, and low-level info tech, he was at heart a bachelor, an autodidact, and a musician. His marriage split up and he moved back to “Mother’s” in a state further south. The last time I saw him he’d gained a few dozen pounds, was drinking steadily, had no work of any kind, and was still living with his mother.

I share that story to underscore the idea that the two older gents whose conversations form the entire contents of Padgett Powell’s latest novel are not simpletons, drunkards or bums. They’re men with slipping-down lives, caught in rumpled circumstances, just like my old friend. Maybe they’re sitting on a park bench, or in a McDonald’s over endless coffee refills, or on a splintery fishing dock. As one says to the other, early on: “Well, if a war don’t break out on you, and you don’t stumble into making money, and you can’t play ball, and women treat you wrong, or men, and you aren’t a movie star, and you don’t have any talent, and you aren’t smart, etc., what are you, we, supposed to do, exactly?”

Batting that question around like aging tomcats is most of what these male voices do over the course of You & Me. Wherever they are, whoever they are, these voices are lively, intelligent, engaged and humorous. Some of the jokes are funny, as are a few of the running verbal tics, especially the one about Studio Becalmed–but the humor goes much, much deeper than any joke or pun. But more about that in a minute.

You might be forgiven if you picked up this book and found that the dual-character dialogue reminded you of Samuel Beckett’s Vladimir and Estragon in “Waiting for Godot:” After all, even the publisher is trying to push that comparison. Why not? Powell’s novel consists entirely of dialogue, just as his 2009 The Interrogative Mood: A Novel? consists entirely of questions, a spareness rarely seen in the post-post-modern commercial fiction universe.

What makes Powell’s book entirely different from Beckett’s play has more to do with substance than style. That isn’t to say these two quasi good-ol’-boys don’t posit plenty of existential questions, for they do: “I forget where we are./Me too. I too. What do you mean, exactly?” and “We are tired every day, are we not?” and “And today, today what shall we do?” It’s just that their big thoughts are often wrapped up in many small details, including a man with too many rain hats, the unacknowledged sexiness of Lucille Ball, and which items make for a complete life. Readers will not be surprised to learn that the list varies depending on the voice and the day.

Nothing much happens action-wise, aside from an occasional yen for ice cream or gin, an outing to a tag sale, or a ramble through the park. These voices (some critics have noted that both could be Powell, who has admitted that the book came to him during an illness when he was joined by Jesus in a pink panther suit) might belong to a Southern version of “Seinfeld.” And yet, the tension that makes this a novel, rather than a book “about nothing” (to paraphrase the famed Seinfeldian goal), is the knowledge that although “We are without a manifesto, not on the manifest,” they continue to consider all manner of both. While “content to be nothing,” Powell’s logorrheic creations clearly know something about almost everything. They refer to the poet as “Trouser Snake Eliot,” they toss around phrases like “ding an sich,” they quarrel about geography and philosophy and history.

This Lucky-and-Pozzo duo (maybe more Laverne-and-Shirley, at times) refuse to surrender their minds to their circumstances. They know what they’re waiting for: Death and its prequel of “the wheelchair circle.” That’s one manifest they won’t escape any more than their betters. Why not refuse to go gentle? One voice says: “Can’t you see that, at the gates, or there waiting for Charon to tie up and watching that dog closely–is Cerberus on the boat, by the way?–saying ‘Take me down to Funky Town, my man.’”

You might be in your mild early dotage, like these voices, or you might be in the first flower of your youth, or anywhere in between–but how can you resist a character who slaps Greek mythology and ‘70s funk together like a quick baloney sandwich? I think I’ll beg your indulgence and talk about my slipping-down friend once more: His was the conversation I often craved, because beneath some of the silliness and repetition, there was a true compassion and a true need. He wanted to reach out, to remind himself from time to time that although he had not lived up to anybody’s expectations, he could occasionally parry words. In You & Me, Padgett Powell reminds us (and himself, too) that playing with words is powerful and meaningful and righteous work. 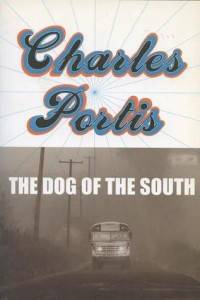 Dog of the South by Charles Portis

This is one of  those books that I’m sort of glad not many people know about. It’s silly and narcissitic, but there’s a small, burnished pleasure that comes with knowing something is good and knowing that not many other people get it.

If you are a fan of either of the quite good film adaptations of Portis’ novel True Grit, you have a sense of what a Portis character is: specific, off-kilter, and essentially comic. Like True Grit, The Dog of The South is a quest novel, though instead of hunting down a killer, Ray Midge is hunting down his car, his credit cards, and his wife—in that order of importance.

Any comic quest novel stands in Don Quixote‘s shadow, and the Don’s idealistic quest in a fallen world is the touchstone for understanding other satirical journeys. Midge is a bizarro Quixote: rather than putting too much value on something insignficant, he doesn’t put enough value, so one would think, on something important–his marriage. His road-trip from Arkansas to Mexico to Belize is a chronicle of going through the motions; it seems as if he is going after his wife more because he knows that going after one’s wife is the sort of thing you are supposed to do. Whatever genuine interest he has is saved for cars and miltary history, both of them in their own way stand-ins for real relationships.

The Dog of the South is a kind of taxonomy of idiosyncratic caring. Like every picaresque story before it, The Dog of the South is a safari of human strangeness, from con-men ex-physicians to box-inhabiting Belizean boys. It’s not as deadly serious as On the Road, but also not as willfully bizarre as a Tom Robbins novel, though it is the kind of book Robbins might have written if he were a Southerner and thus inherited a more gothic sensibility. The Dog of the South, though, feels contemporary in ways that neither of these other novels do, partly because its eccentricity is studied and its central concern of what to be concerned about remains relevant. (Indeed, it seems the kind of book ripe for a Wes Anderson adaptation).

Midge’s misplaced, or at least disjointed, “doggedness” reminds us that the problem is usually not not-knowing what we want, but not knowing even that we don’t know what we want. Like a dog chasing a car, we are farcical in direct proportion between trying to get what we want and what would happen if we ever, by some oddball chance, managed to get it.