Last month, our Literature Book Club read Zora Neale Hurston’s masterpiece Their Eyes Were Watching God. Our small and enthusiastic group of literature lovers explored the details of Hurston’s life and how she wrote the novel in seven weeks in Haiti. 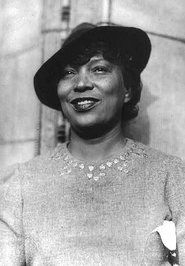 We utilized standard book club process of using specific passages to support our positions. Soon, we deviated from the norm and simply read the prose from Their Eyes Were Watching Good that had most moved us.

What follows are some of those passages.

1.)  “Ships at a distance have everyman’s wish on board. For some they come in with the tide. For others they sail forever on the same horizon, never out of sight, never landing until the Watcher turns his eyes away in resignation, his dreams mocked away by Time. That is the life of men. Now, women forget all these things they don’t want to remember, and remember everything they don’t want to forget. The dream is the truth. Then they act and do things accordingly.”

2.)  “She had an inside and an outside now and suddenly she knew how not to mix them.”

3.)  “There is a basin in the mind where words float around on thought and thought on sound and sight. Then there is a depth of thought untouched by words, and deeper still gulf of formless feeling untouched by thought.”

5.)  “Love is like the sea. It’s a moving thing, but still and all it takes its shape from the shore it meets, and it’s different with every shore.”

6.)  “So she sat on the porch and watched the moon rise. Soon its amber fluid was drenching the earth, and quenched the thirst of the day.”

8.)  “They seemed to be staring at the dark, but their eyes were watching God.”

9.)  “She had waited all her life for something, and it had killed her when it found her.”

10.) “The familiar people and things had failed her so she hung over the gate and looked up the road towards way off. She knew now that marriage did not make love. Janie’s first dream was dead, so she became a woman.”

11.) “The morning air was like a new dress. That made her feel the apron tied around her waist. She flung it on a low bush beside the road and walked on, picking flowers and making a bouquet…From now on until death she was going to have flower dust and springtime sprinkled over everything.”

12.) “In the cool afternoon the fiend from hell specifically sent to lovers arrived at Janie’s ear. Doubt.”

14.) “But any man who walks in the way of power and property is bound to meet hate.”

15.) “Love makes your soul crawl out from its hiding place.”

18.) “…she began to stand around the gate and expect things. What things? She didn’t know exactly. Her breath was gusty and short. She knew things that nobody had ever told her. For instance, the words of the trees and the wind…She knew the world was a stallion rolling in the blue pasture of ether. She knew that God bore down the old world every evening and built a new one by sun-up. It was wonderful to see it take form with the sun and emerge from the gray dust of its making.”

19.) “Janie saw her life like a great tree in leaf with the things suffered, things enjoyed, things done and undone. Dawn and doom was in the branches.”

20.) “Of course he wasn’t dead. He could never be dead until she herself had finished feeling and thinking.  The kiss of his memory made pictures of love and light against the wall. Here was peace. She pulled in her horizon like a great fish-net. Pulled it from around the waist of the world and draped it over her shoulder. So much of life in its meshes! She called in her soul to come and see.”

What are your favorite Their Eyes Were Watching God quotes and passages?