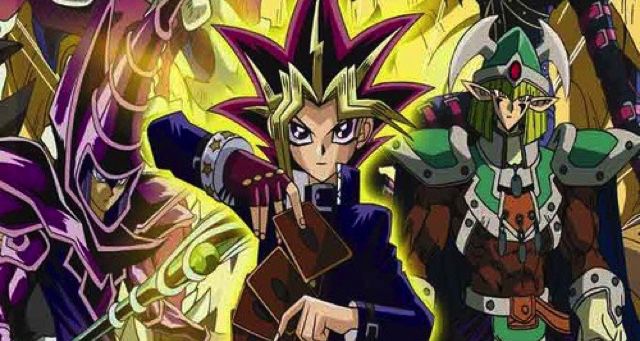 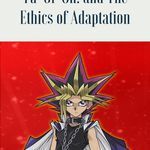 There is a scene early in the English Yu-Gi-Oh! adaptation that has always stuck with me. In it, duelist Mai Valentine desires a private room aboard a ship to a Duel Monsters tournament, so she approaches Rex Raptor, whose finalist status in a previous tournament granted him such an amenity, with a proposition: if she can beat him in a duel, he’ll forfeit his room to her. Should Rex win the duel, Mai offers, he’ll be rewarded with a kiss. 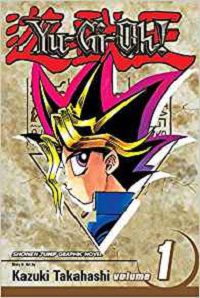 Even as a kid I found these stakes lopsided. Was Rex so hot for Mai to warrant risking his comfort, privacy, and status on the ship for a quick peck? Maybe, but the scene feels abrupt. I discovered years later, upon encountering the Yu-Gi-Oh! manga for the first time, that the favor Mai proffers in the original scene is much more, let’s say, involved, than in the English dub.

If you’re not familiar, Yu-Gi-Oh! is a manga and anime series centered around a boy named Yugi Muto, who is the vessel for an Egyptian pharaoh whose spirit lives in an artifact discovered by his grandfather. The action of the series generally revolves around the high stakes games Yugi and his friends play against their adversaries. In the anime, the contests are almost always in Duel Monsters, a card game in which duelists command monsters and magical spells to outwit and overpower their opponents.

The version of Yu-Gi-Oh! that I, and other American viewers, are likely most familiar with is the English dub by 4Kids Entertainment. This dub is rife with little sanitizations like the scene between Mai and Rex. Sex, drugs, and alcohol are nowhere to be found, and entire storylines motivated by murder and vengeance are altered significantly, or flat out removed.

Whereas in the manga we see the first arc’s big villain mind control an assailant into suicide, in the anime the scene shows a cartoonish fall through a trap door, and the handgun clumsily airbrushed away. The same episode also has images of gambling, alcohol, and prostitution removed. Later, in the “Battle City” arc, a duel in which the loser will be decimated by a giant saw blade instead shows “dark energy discs” that encroach duelists as their life points dwindle.

The latter is an example of the biggest liberty 4Kids took in sanitizing its source material. In the manga, duelists often wage battle with life or death stakes. Although the 4Kids dub does not abandon this concept, instead of referring to the stakes in such stark terms, the Shadow Realm is introduced as a stand in for the much simpler concept of dying. As portrayed in the dub, the Shadow Realm is a prison for one’s soul, from which main characters are often rescued.

Of course, localizing and cleaning up anime and manga to adhere to American standards is not a new concept, nor one unique to Yu-Gi-Oh!. However, there are few examples I’m aware of in which the source material has been so drastically altered. The original manga and the Japanese anime are dark, violent stories, but the English dub is often lighthearted and goofy. Even in the dub’s most somber moments, the stakes are comparatively low.

Should children necessarily be exposed to sex, bloody murder, and depictions of eternal suffering in their Saturday morning cartoon schedule? No, probably not. But I have to wonder, why try to force a story in which these things are so integral to the plot to be a light, family friendly affair for an English speaking audience?

Well, the answer is likely related to the other major difference between the anime and the manga: the complete supremacy of Duel Monsters over all other games. 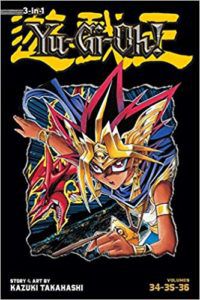 Remember, in winning the tournament at Duelist Kingdom, Yugi earns the title King of Games, implying plurality. Indeed, in the manga, Yugi and his pharaoh-self play many different “shadow games” against their enemies, including dice, a tabletop RPG, and the aptly titled “Hell Quiz”. In the anime…well, there’s a short arc in which Yugi plays a convoluted game called Dungeon Dice Monsters, which is mostly a spinoff of Duel Monsters. Other than that, Duel Monsters appears in just about every episode, to the exclusion of most any other game.

The thing to understand about Duel Monsters is that it was marketable. A trading card game based on the in-series card game was first published in 1999 in Japan and 2002 in North America, and if you were an adolescent during that time, it’s extremely likely you knew what a Yu-Gi-Oh! card looked like. The TCG holds the Guinness World Record for the top-selling card game in the world. I can personally attest to hundreds of dollars spent on starter decks, booster packs, carrying cases, protective sleeves, card binders, and other accessories for my Yu-Gi-Oh! collection.

Therein lies the answer to that question—a kid-friendly media franchise begets a kid-friendly line of merchandise. By sanitizing the manga, and even the Japanese anime, into a palatable version for an American audience, 4Kids created a vehicle for selling trading cards that wouldn’t offend the country’s strangely puritanical tastes. To that end, the anime clearly suffers from a lack of meaningful storytelling. Not to be all “BOOK GOOD, ADAPTATION BAD,” but the manga seems way more invested in telling a cohesive story, whereas the anime amounts to little more than a commercial for the trading card game.

It’s disheartening to realize a story I loved so much is primarily focused on hawking cards and shitty plastic toys, but that’s often the unfortunate reality of adaptation. TV shows have ad time to sell; films must earn back their massive budgets. All too often, we lose vital pieces of the story, or the indescribable something that made the source material so special. But as long as the adaptation makes money, the people whom it profits will think little of such trifles as narrative cohesion, cashing in on their investments before looking for the next story to merchandise.