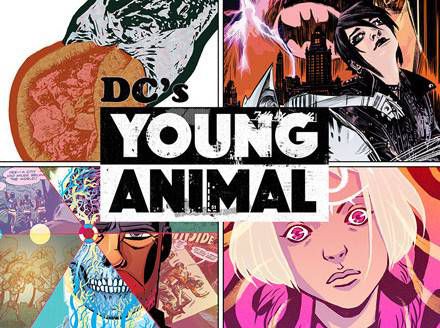 Over the past and next few weeks, DC’s new imprint Young Animal is launching a number of new titles. Charles Paul Hoffman and I are sharing our thoughts on each comic in a back and forth discussion. First up: Doom Patrol #1+2 and Shade The Changing Girl #1. 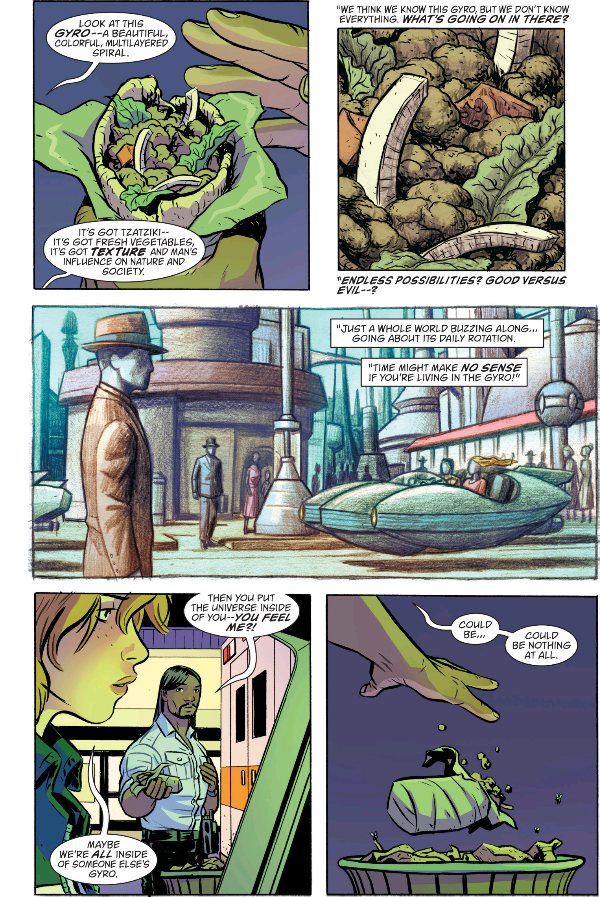 CPH: Okay, confession time. Before the Young Animal launch, I had never read any of these books before, and had never even heard of Cave Carson. (Mother Panic is all new, right?) So, I have been going into these totally blind. And… it’s definitely been an experience.

Issue #1 starts off normal enough, with Casey Brinke’s life as an ambulance driver, but it quickly veers far off into the absurd. Not just the tiny society living on her partner’s gyro, but the single page “What’s Going on with Niles Caulder” aside (there’s another in the second issue), the fast food franchisers from outer space, the singing-dancing new roommate who accidentally blows up Casey’s old roommate… As I finished the issue, I had a serious “WTF did I just read” sensation.

So, of course, I proceeded right on to issue #2, which was totally more of the same. There’s a plot here, but it’s buried underneath what feels like a comic script written by Hunter S. Thompson that’s been translated into Mandarin and then back into English.

TM: My experience with the Doom Patrol goes as far as Grant Morrison’s run and their cameos in different DC events, and I ate up both issues like the multi-flavored burritos they are. There are lots of seeming non-sequiturs that are cute winks to Doom Patrol fans that the band is getting back together. I am fine with Way, Derington, and Bonvillain taking their time to introduce a proper arc that pulls everyone together. Randomness for its own sake can be irritating, but I am all about Young Animal’s approach for now. 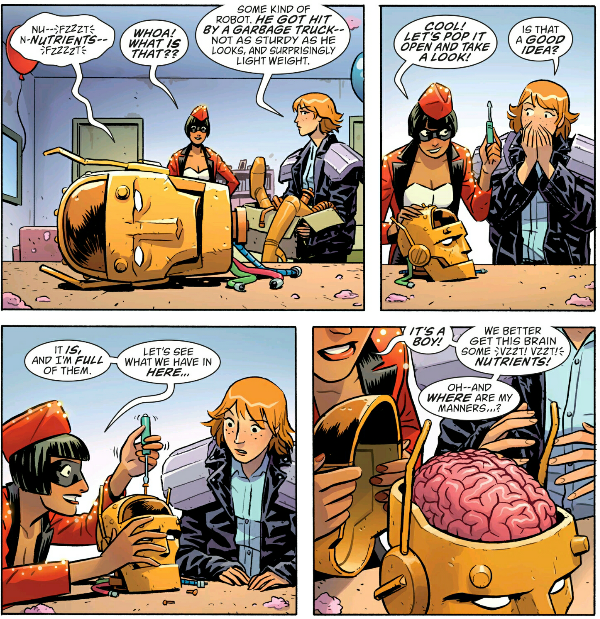 Add to your Hunter S. Thompson and retranslations the meta-influence of Doom Patrol’s return during DC Rebirth and Vertigo reshuffling. Cliff is struggling to stay in one piece as always, but so is DC’s publishing line, effectively segmenting Vertigo into this Young Animal side avenue under Way. The Casey Brinke protagonist stand-in cycles between a job and videogames, and gets shocked into paying attention. I wonder how many of Way’s followers were weirded into reading more than one issue, let alone track #1 of a new comics series?

You had a “WTF” experience, Charles. Was it fun?

CPH: Yeah, it was definitely fun for a couple of issues. And there is a real sense that this is, as you say, the “getting the band back together” intro arc before we get into the ongoing adventures. So, I’ll be here at least through the end of this arc before making the decision whether this needs to go on my pull list or just isn’t for me. 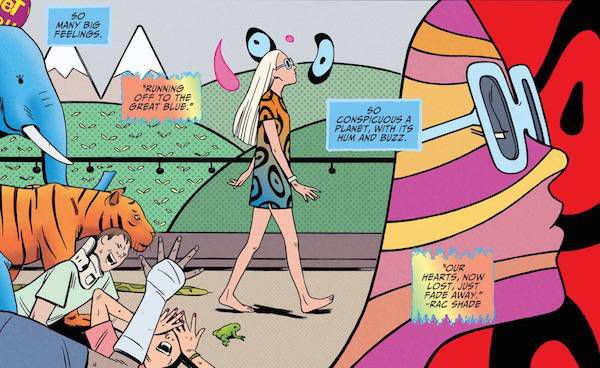 CPH: Funny story: I read Shade the Changing Girl #1 before Doom Patrol and I initially thought it was a tad hard to follow, but in retrospect it’s like a well-organized five paragraph essay next to DP.

I really liked STCG. Maybe a tiny bit more background would have been helpful for new readers, but I guess all you really need to know is that Loma is a disaffected alien looking for a new adventure, she steals Rac Shade’s madness coat, and inhabits the body that Megan Boyer wasn’t really using. Watching Loma interact with Megan’s family and “friends” has been a lot of fun so far. We’re slowly getting the sense that Megan was a genuinely terrible person, and it will be interesting to see how Loma rebuilds Megan’s life and relationships (or not, as the case may be).

The creative team—all women, I might note!—has done a fantastic job so far of creating an environment infused with madness. Not just the madness of Loma and Shade’s madness coat, which manifests in Zarcone and Fitzpatrick’s psychedelic imagery, but also the insanity of everyday life. There’s a real potential here to dig into some issues we don’t usually see in comics, such as how living as a teenage girl in the deeply sexist American society is enough to drive one mad.

I’m really loving STCG so far, and hope it gets a nice long run to explore these issues.

TM: Part of my enjoyment of Young Animal’s material so far comes from the difficulty of spotting the “tether” between each book’s status quo and where it’s heading. A lot of superhero burnout can come from watching the limits of a book’s setup stretch to the same limit over and over until the reader sees the tether before it’s even moved.

Shade The Changing Girl, though? I felt a lot like you did during Doom Patrol, Charles. I had no reference point that wasn’t built in real time, scene for scene. The combination of alien society, human society, and recurring trippy imagery kept me guessing from scene to scene. Any comic that feels like an ever-changing discovery is worth following. I think Young Animal is two for two in this roundup. What about you?

CPH: Agree. I’m not sure I’ll stick around long-term for DP, but pretty much everyone else seems to adore the book, and STCG is promising a perspective we don’t see a lot in Big 2 comics. So far, the Young Animal relaunch is reminding me of the best of 1990s Vertigo, but with a contemporary flair. (Probably not a huge surprise, since both Doom Patrol and Shade, the Changing Man were in the Vertigo lineup when the imprint launched.) Here’s hoping it succeeds like early Vertigo in bringing that odd, uncanny voice to a mass audience.

TM: Here’s hoping that any resemblance to the 90s fades away to transform into an all-new kind of touchingly weird.

That’s it for Part One! We’ll see you next time to discuss Cave Carson Has A Cybernetic Eye and Mother Panic.