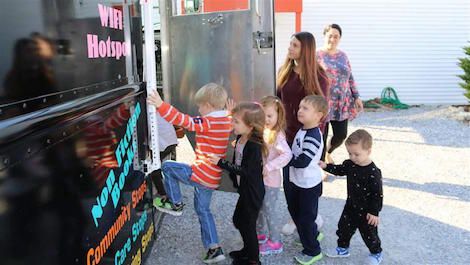 As the Graves County Public Library bookmobile librarian, Hennessee says she serves some of the most isolated areas of her community. She delivers books to some of the loneliest widows and some of the poorest children, but, according to her, “it’s not really about the books.”

Hennessee, 51, started doing this job in 1995, when bookmobiles — miniature, mobile libraries in the backs of walk-on vans — were in their heyday. At the time, there were nearly 1,000 operating across the United States. Now, there are fewer than 650, according to the most recent data from the Institute of Museum and Library Services, a research arm of the federal government.

650 operating is still a nice number, given how hard budget cuts hit libraries in the last decade. A great piece on the power of the bookmobile.

Chilean-American author Isabel Allende began writing her first novel on January 8, 1981. What had started as a letter to her grandfather who was dying eventually transformed into The House of the Spirits. Allende now begins all of her books on that same day, January 8 — initially out of allegiance with the critical and commercial success of her first book. But now, she says, she does it because she can be in solitude, since everyone knows she is not to be disturbed on that date.

The weird habits of authors are weirdly fascinating.

To come up with the 15 books below, we limited ourselves to books published since 2015, “about” Chicago, by Chicago-based authors. And so by definition, we had to omit gems like 2015’s Negroland (Margo Jefferson has lived in New York for decades), Samira Ahmed’s Love, Hate & Other Filters (Batavia isn’t quite Chicago), Gina Frangello’s Every Kind of Wanting (Chicago is present but Caracas and the North Shore are at the forefront), and all the amazing local writers who set their books elsewhere (here’s a good start).

While these poets, novelists, journalists, essayists, historians, and cartoonists don’t share a common aesthetic like the Chicago renaissances of old, their books share a spirit of honesty and imagination. Thanks to these writers (and many more), Chicago is once again becoming the kind of cultural epicenter that once led H. L. Mencken to call it “the literary capital of the United States.”

As someone who grew up in Chicagoland, lived in the city, and returned to the area, this literary Renaissance is so great to see and read.

Former National Ambassador for Young People’s Literature Gene Luen Yang calls us all to READ WITHOUT WALLS, exploring books about characters who look or live differently than you, topics you haven’t discovered, or formats that you haven’t tried.

READING WITHOUT WALLS promotes diversity and opens readers’ eyes to new ideas and experiences. In this divided time in our nation’s history, READING WITHOUT WALLS is an inclusive way to spread appreciation and understanding for others — and to learn new and exciting things.