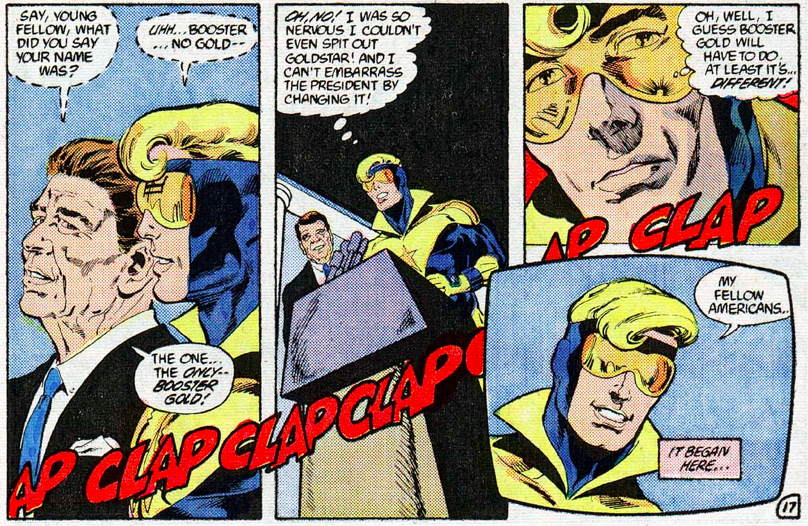 Well, like so many things, it’s Reagan’s fault. (Political joke!)

Michael Jon Carter – “Booster” to his friends and the fans of his skills on the gridiron – came to the 20th century determined to become its most famous hero as quickly as possible. He even had a big, splashy name all picked out for himself: Goldstar. And what better way to rocket himself to (gold)stardom than to save the leader of the free world?

With the help of his robot sidekick, Skeets, Booster identified an upcoming terrorist attack targeting then-president Ronald Reagan and VP George H. W. Bush. Despite some slightly paradox-creating interference from the Legion of Super-Heroes, who thought Booster was after the president, Mama Carter’s little boy was able to save the day.

A grateful Reagan held a press conference to introduce his rescuer, and the country’s brightest new hero. Booster’s big moment was finally here.

And he whiffed it.

Media-savvy enough to know that the damage was done, Booster rolled with it, subsuming his fledging company Goldstar, Inc. into the larger Booster Gold Incorporated, and hawking Booster Bits, Boosterpaste, and even a short-lived Boostermobile. (His twin sister Michelle eventually took over the Goldstar identity.)

The relentless march of time and a couple of retcons would suggest that the Reagan incident is no longer in continuity, but Booster is a time traveller, and one who appears to be somewhat immune to retcons and reboots, so there’s no reason the Reagan incident can’t still be canon, in all of its silly glory. And that’s downright Boosterrific.