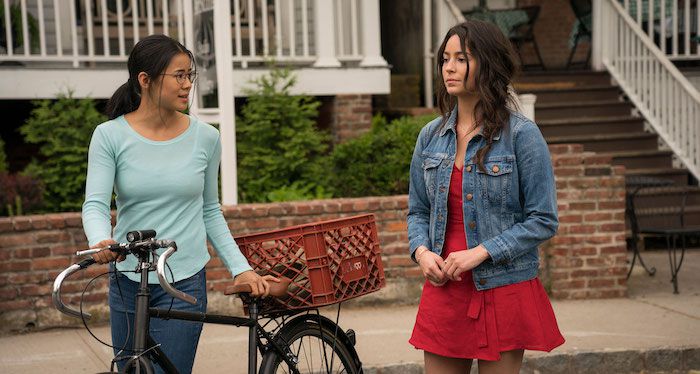 At the beginning of May, Netflix released a new coming-of-age film called The Half Of It. Directed by Alice Wu, the movie is a coming-of-age film about Ellie Chu, a queer Chinese American teen who agrees to help the school jock, Paul, capture the attention of a girl that she secretly also has a crush on. Queer Asian representation is something that we don’t often get in the media, so I watched this movie almost as soon as it was released – and I wasn’t disappointed. It was sweet and funny, and focused on what it means to love those who are your friends, your family, or even your crush.

But after watching the film, where can viewers turn to next for their hefty dose of diverse coming-of-age stories? Here are few books that might fill the void:

Late To The Party by Kelly Quindlen

If you loved the friendship aspects of The Half Of It, then you’ll love Late To The Party. This novel follows 17-year-old Codi, who has been happy spending her teenage years hanging out with her two best friends, watching Netflix in her basement. Not going to parties or going on dates. When her friends decide it’s time to try some new things, Codi is not too sure. But then she runs into one of the cool kids from school, Ricky. As an unexpected friendship develops between them, Codi finds herself enjoying new friendships, new experiences, and even a crush on Ricky’s friend, Lydia. Late To The Party is a story that really delves into the complexities of friendship and being a teenager, and it includes a cute sapphic romance too!

Ellie’s queerness is something that really informs the story and relationships of The Half Of It. If you’re looking for books that look into the complexities of queerness, and are affirming and celebratory of queerness, look no further than Felix Ever After! This book follows Felix Love, who is black, trans, and queer. He’s never been in love and is afraid that maybe he never will be. Then an anonymous student posts his deadname and pictures of him before transitioning, and begins to send him transphobic messages. But Felix is pretty sure he knows the culprit, and he’s keen on getting his revenge. He didn’t quite anticipate his revenge plan landing him in a love triangle, though. While there is a lot of romance in Felix Ever After, the book is really about Felix himself, and how his experience with romance leads him to learn more about himself. The book also features nuanced family relationships, and features a cast full of queer characters!

You Should See Me In A Crown by Leah Johnson

Did you love the sapphic aspect of The Half Of It? The longing in Ellie’s voice as she talks about Aster? The furtive glances of a fast-growing crush? Then you definitely want to pick up You Should See Me In A Crown. Liz Lighty has her plans for life all set: she’s going to get out of her small town in Indiana, attend her dream university, and become a doctor. But when her financial aid falls through, Liz is devastated. Until she remembers her school’s scholarships for Prom King and Queen. The last thing Liz wants to do is run for Prom Queen, but at least the cute, new girl, Mack, makes things a little easier. But can Liz really afford to fall for the competition? You Should See Me In A Crown features an adorable sapphic romance, and taps into all of those warm and fuzzy feelings of developing a crush!

Ellie Chu is a queer Asian teen! Not something we see, or read about, very often. But It’s Not Like It’s A Secret is a book that delves into the complexities of being a queer Asian teen! Sixteen-year-old Sana has a lot of secrets: like her dad’s affair, and the fact that she’s pretty sure she likes girls. When her family moves to California, Sana meets Jamie and she quickly develops feelings for Jamie. But there are a few problems. Like the fact that her new group of friends don’t get along with Jamie’s friends. And her friend Caleb, who might have more-than-friendly feels for Sana. And her dad’s affair getting too difficult to ignore. Now, Sana needs to find a way to tell people her secrets, and navigate what comes after that. It’s Not Like It’s A Secret is a book that deals with a lot of really complex things, but at its core is a queer Asian teen figuring out what it means to be queer and Asian.