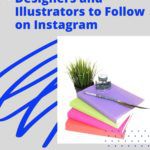 If you love good YA book cover art, then you’ll want to make sure you don’t miss out on seeing them as works in progress. Thanks to the visual power of Instagram, many YA book cover artists and designers have an active presence and showcase not only the covers they’ve worked on or are working on, but they share so much more of their awesome, inspiration, and downright badass art.

Find below a wide array of YA book cover artists and designers. I’ve included both the creators of the art and those who help design the covers. Many work across age categories, but I’ve noted below the names of each artist or designer some of their most well-known YA book cover work.

If you’re looking to drool over incredible art and design, then look no further!

It should be noted that YA book cover artists and designers are wonderfully diverse. In an industry that is far too white, it’s refreshing to see so many people of color both in the U.S. and outside the U.S. Likewise, a number of the covers these designers and artists have worked on are #OwnVoices—in other words, a Puerto Rican illustrator whose work is front and center of a story by a Puerto Rican author about a Puerto Rican main character. More of this, please! It’s not only important but it’s beautiful and opens up a whole world of potential for creative folks (and folks who just like great design and art!).

Alcaino’s work has been featured on The Iron Raven by Julia Kagawa, When Dreams Descend by Janella Angeles, and more.

Samya’s work is the face off C.M. McGuire’s Ironspark and Brown Girl Ghosted by Minti Das.

You’ve seen Baker’s covers before, because they pop. Some of her recent works include Every Body Looking by Candice Iloh, Furia by Yamile Saied Méndez, and Shirley Chisholm is a Verb by Veronica Chambers.

Andrew Eliopulos’s The Fascinators was designed by Brickley.

Not all illustrators or designers work on the lettering for a book cover’s title, tag line, or by line. Sometimes a specialist in hand lettering hops in, and that’s what Bringle does. This designer and illustrator for Target has lettered the covers of the 20th anniversary edition of The Princess Diaries by Meg Cabot and the RWBY Rooster Teeth YA novels by EC Myers and Violet Tobacco.

Bush’s design work includes Perfect on Paper by Sophie Gonzales, How I Resist by Maureen Johnson, and so many others.

There’s zero question if you love YA that you’ve seen Cabal’s work, which includes the covers of Running by Natalia Sylvester, Felix Ever After by Kacen Callender, and A Song Below Water by Bethany C. Marrow.

Jason is the creator behind Want and Ruse by Cindy Pon.

Curtis’s work has been seen on the three-book series beginning with Furyborn by Claire LeGrand, The Initial Insult by Mindy McGinnis, and The Kingdom of Back by Marie Lu.

If you love Elizabeth Acevedo’s books, then you know the work of this artist who created With The Fire On High and the UK cover of Clap When You Land.

Peep the art director of Dresner on books like City of Spells by Alexandra Christo and The Cemetery Boys by Aiden Thomas.

The Cost of Knowing by Brittney Morris, The Infinity Courts by Akemi Dawn Bowman, and Legendborn by Tracy Deonn are among some of Eckes’s design projects.

Molly’s lettering is featured on the cover of Nobody Knows But You by Anica Mrose Rissi and was part of the team behind Lyla Lee’s I’ll Be The One.

Fitzsimmons has worked on so many standout YA book covers, including Write Yourself a Lantern by Elizabeth Acevedo and Infinity Son by Adam Silvera.

You’re going to recognize Gabbert’s Little White Lies by Jennifer Lynn Barnes and The Walls Around Us by Nova Ren Suma, but did you know she’s a tattoo artist too? Her Instagram feed is a dream.

You know those really awesome paper cut designs that are on the front of covers like Frankly In Love by David Yoon? Gildersleeve is the genius behind ’em.

Gonzalez is the talent behind designing such awesome YA book covers as I Wanna Be Where You Are by Kristina Forest, All Boys Aren’t Blue by George Johnson, and It’s Kind of a Cheesy Love Story by Lauren Morrill.

Goodloe’s work can be peeped on Now That I’ve Found You by Kristina Forest, Faith: Taking Flight by Julie Murphy, and If We Were Us by K.L. Walther.

Grlic shares the spotlight with James Iacobelli, wherein the share their individual works, as well as their joint creations, so you’re getting two designers in once place. Grlic’s work includes Carry On by Rainbow Rowell, The Mall by Megan McCafferty, and Foul Is Fair by Hannah Capin.

Hard’s YA book covers will be coming fresh in 2021, so keep an eye out for Better Together by Christine Riccio and Slingshot by Mercedes Helnwein. It’s quite refreshing to see maximalism again!

Daria drew the covers for books like Lobizona by Romina Garber and the sequel Cazadora.

Among Hunter’s incredible design work are books like The Story of Owen by E.K. Johnston, Fat Chance, Charlie Vega by Crystal Maldonado, and See No Color by Shannon Gibney.

Peep Lau’s design work on Don’t Read The Comments by Eric Smith, Smash It by Francina Simone, and more.

Hot British Boyfriend, anyone? Li’s not only beginning to dip into the world of YA book covers, but she’s created so many incredible fan covers on her Instagram.

Earlier in the post, I alluded to a Puerto Rican illustrator doing a cover for an #OwnVoices Puerto Rican YA book. That would be Lugo, who did the cover for Fat Chance, Charlie Vega.

Black Girl Unlimited by Echo Brown and Home Is Not a Country by Safia Elhillo are among some of the covers with Ly’s work behind them.

Casey is a book lover through and through, and some of her designs include A Good Girl’s Guide to Murder by Holly Jackson, the We Need Diverse Books anthology A Universe of Wishes, and so many more.

Talk about versatile design direction! Nickolls’s work includes Spells Trouble by P.C. and Kristin Cast, the illustrative work for The Box in the Woods by Maureen Johnson, and Reverie by Ryan La Sala.

Check out Northrup’s lettering for Six Crimson Cranes by Elizabeth Lim and the illustration for Ghost Wood Song, among others.

Swoon over the design and illustration by Pascuzzo on The Burning by Laura Bates, It Came From The Sky by Chelsea Sedota, and more.

You saw the designer behind A Universe of Wishes—Casey Moses—now see the illustrator behind it with Katt Phatt. Phatt’s letter work, which you’ll see step-by-step, is phenomenal.

Though Remenar hasn’t done a whole lot of YA book covers yet, with work like Vicious Spirits like Kat Cho to showcase, chances are there will be many more Remenar covers to come.

From spooky to romantic, Resnick’s design sensibilities are outstanding. Titles include Cool for the Summer by Dahlia Adler, The Project by Courtney Summers, and The Gilded Wolves by Roshani Chokshi.

For fans of Brandy Colbert’s stunning covers like The Revolution of Birdie Randolph and Stamped by Jason Reynolds and Ibram X. Kendi, you have Robinson to thank.

The incredible illustrated covers of The Voting Booth by Brandy Colbert and The Opposite of Always by Justin A. Reynolds are the work of Singleton.

Stemple-Lobell’s name is stamped on some iconic YA book covers for her design work, including Punching The Air by Ibi Zoboi and Yusef Salaam and Pride by Ibi Zoboi. If you’re a fan of killed cover designs, you’re in for a treat!

Some of Strain’s works include Havenfall by Sara Holland and No True Believers by Rabiah York Lumbard.

Swaab’s work showcases a wide range of talent from war-angled YA books like the forthcoming Enduring Freedom by Jawad Arash and Trent Reedy to disaster books like Aftershocks by Marisa Reichardt to a Groundhog Day–inspired YA titled Time Travel for Love and Profit by Sarah Lariviere.

Among the beloved and easy-recognizable work of Tierney are The Hazel Wood by Melissa Albert, the paperback edition of The Summer I Turned Pretty series by Jenny Han, and more.

Wilson’s power is in her faces, which you can’t deny when you even glimpse Legendborn by Tracy Deonn.

Worrell and Yoo, who is below, have collaborated as a design-illustrator team on a number of outstanding YA titles including The Good Luck Girls and Sisters of Reckoning, both by Charlotte Nicole Davis. Worrell’s other design credits include Every Reason We Shouldn’t by Sara Fujimura and Victories Greater Than Death by Charlie Jane Anders.

Yoo’s bright and dreamy style is the cover art for The Good Luck Girls, as well as Parachutes by Kelly Yang and more.

If this whets your appetite to dive even deeper in book cover art and design, you’ll want to explore why so many YA book covers look the way they do right now, as well as these Instagram accounts which celebrate book cover design. You’ll also want to then follow some bookish art departments, too!