Welcome to Day 1 of Book Riot’s first official YA Adaptation Showdown. This week-long event invites members of the YA community to share their thoughts on two adaptations and select one as the winner of their bracket. Details about how brackets and titles were selected can be found in the official kickoff announcement for the YA Adaptation Showdown.

Today we begin with two bracket discussions, which will be followed by two on Tuesday, two on Wednesday, one on Thursday that will crown the official YA Adaptation Showdown winner, and one on Friday which will crown the readers’ choice winner.

Ana Grilo on The Book Thief vs. Persepolis 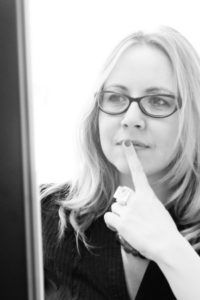 Ana Grilo is a Brazilian who moved to the UK because of the weather. No, seriously. She works with translations in RL and hopes one day The Book Smugglers will be her day job. When she’s not at The Book Smugglers, or hogging our Twitter feed, she can be found blogging over at Kirkus with Thea or podcasting with Renay at Fangirl Happy Hour.

I am here today to tell you of two stories: that of The Book Thief by Markus Zusak and that of Persepolis by Marjane Satrapi. I will look at the books that came first and then look at their subsequent movie adaptations. I will tell you which one I like best and which movie adaptation I think deserves to move to the next round as the outright clear winner of this round 1.

(It is Persepolis, I am talking about Persepolis. But I am ahead of myself.)

Let me introduce you to our contestants.

On one side, we have The Book Thief, set in Nazi Germany. First published in 2005, it has, for all intents and purposes, fantastic things going for it: it is about a little girl’s love for books, the importance of words, it has lyrical writing and it is narrated by a grouchy, sarcastic Death who often interrupts the narrative with snide asides. Death, who takes an interest in the life of a little girl, Liesel, in the midst of one of the worst periods in the history of mankind, whose struggle to survive at that time lives on in her words written in a diary, which is what Death is using to tell us her story. 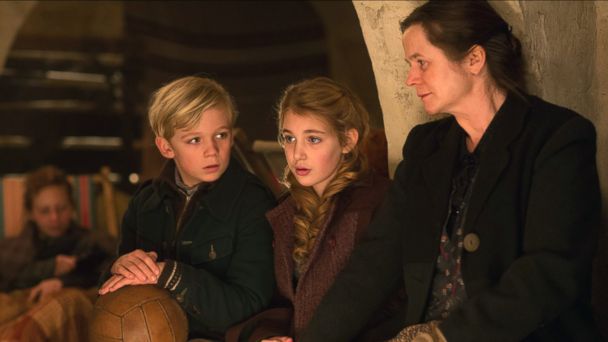 The story opens with a terrible train journey, in which Liesel’s little brother dies of hunger and cold in front of her eyes. It is also a journey that ends with her being separated from her mother. It is a harrowing opening chapter until we realize it is a gross bait and switch opening – and a sign of things to come. A book set during World War II, with an opening such as this one is easily read as code for Jewish transportation. But soon it is revealed that Liesel is in fact, German, and is being separated from her Marxist mother and placed with foster parents. There is an interesting story here that the author is, sadly, not prepared to engage with. Instead, from that moment on, the story is an almost fairytale-like story following the lives of the German residents of a small German town as they struggle to survive the war.

On the one hand, we have the personal, the micro: a coming of age story about a little girl who learns to love and be loved by her foster parents. Her foster mother someone who hides her love behind hard words, her foster father, the nurturing one who teaches Liesel how to read. Those teaching lessons happen at night, when Liesel wakes up from nightmares about her dead brother. The two also become complicit as Liesel steals books to read (hence, the book thief title) – one of them right from a burning pile made up to celebrate Hitler’s birthday. Liesel’s best friend in the world is her neighbor Rudy and the two spend a lot of time together engaged in fun shenanigans. They are poor, struggling to find work and food. It is a hard time for all.

I can’t help but to feel that this would have been a great story had it not been set in Nazi Germany.

Because on the other hand, we have the macro, where and when the story is set and how it affects Liesel’s life. Most of the characters in the novel are members of the Nazi party – Liesel and Rudy are both Hitler Youth. The mostly lovable, ordinary inhabitants of the town are Nazis we are definitely meant to sympathize with as it is clear the goal here is to makes us think: “they didn’t know”, “there was nothing they could do”, “they resisted”. And one of the ways in which they resist is when Liesel and her parents hide a Jew in their basement. Liesel’s coming of age is directly connected to this man, Max. Their conversations and love for words connect them both, and Liesel comes to learn true love and connection through this Magic Jew, who teaches her so much about love until he has to leave or else they will all be killed. He ends up at Dachau but survives.

In other words, this book could perhaps be described as the novel equivalent to #notallnazis.

Now, we all know that were in fact Good Germans, but in the whole of this novel, in the whole of a German town, of all German named characters, none really comes across as an actual complicit Nazi with convictions apart from one (Liesel’s foster parent’s son but he conveniently disappears from the novel soon enough). So for example: when the town burns books, they do it because “Germans like a good fire”. In fact, perhaps the quote below will serve to fully illuminate my main problem with the novel (and its movie adaptation) in how it presents Nazism in a nutshell as:

“You see, people may tell you that Nazi German was built on anti-Semitism, a somewhat overzealous leader, and a nation of hate-fed bigots, but it would all have come to nothing had the German not loved one particular activity:

So there you have it. Starting with the aforementioned emotionally manipulative bait and switch at the start of the novel, The Book Thief is problematic as fuck.

Its movie adaptation makes it worse. Released in 2013 and starring Geoffrey Rush, Emily Watson, and Sophie Nélisse as the eponymous character (all of them featuring terrible German accents), The Book Thief movie is a beautifully shot and photographed condensed, abbreviated version of the novel that manages to miss out on its genuine emotional moments, to diminish Death’s narration, and to make Nazism into an even lighter, glossed over affair.

Gone are the small moments that build the connections between the characters, gone are all the moments of hunger the characters go through, gone is all the caution and utter fear when a character dares to cross a line against Hitler or the Nazis in any way. Here, the hiding of Max is not shown as the portentous choice that it was. In the book, Liesel was utterly terrified by her father into not telling the truth to anyone. The same scene in the movie comes in a lighter tone and in fact, Liesel ends up telling Rudy (which does not happen in the novel). Acts of “resistance” in the movie end up being scenes like Liesel and Rudy yelling at an empty lake “I hate Hitler”.

It all comes across puerile, simplistic and rushed, and to me, it is a poor adaptation of an already complicated novel to adapt in the first place. Even worse, that maxim “The book is always better” sadly doesn’t come close to applying here.

And that brings me to our second contestant, Persepolis by Marjane Satrapi, an autobiographical series of graphic novels originally published in French in 2000 with an omnibus edition published in English in 2007. Persepolis follows the life of Marjane – nicknamed Marji – growing up in Iran in the throes of the Islamic revolution of 1979 when she was a 10-year-old girl and following her life until early adulthood living through the Iran-Iraq War.

The graphic novel is episodic, going back and forth into the past and some times glimpsing into the future.

Interestingly, just like The Book Thief, Persepolis is too, a novel of war featuring the coming of age of a young girl. Both look at individuals in the context of their nations in a time where their nations are doing absolutely shitty things. Both look at oppression, complicity and resistance.

Persepolis is also multilayered: on the micro, the story of a young, rebellious curious girl in a well-off family of Marxists, with a love for reading and an inquisitive mind that will land her in trouble more times than she can count. Her relationship with her parents and her grandmother to start with, then with her friends as she grows up and leaves Iran for a few years to study abroad. We see Marji’s experimenting with drugs, finding love and sex, struggling as an immigrant, finding a love for art and music.

On a macro level, her family never sugar coats what his happening in their country: they have friends and relatives in jail, they know people who have been murdered and executed. One of Marji’s beloved uncles is one such person. Marji is after all, growing up in a country that has become increasingly dangerous to individuals who resist and which is especially unsafe to women who do not comply. There is a matter of struggling with privilege too – Marji comes from a well-off family who is able to afford to safely send her abroad to study. But in doing so, Marji experiences not only survivor’s guilt but also a sense of dissociation from her home and her history. Who is she when she is abroad? In one specific scene, she introduces herself as French to new friends and the ensuing crushing guilt and self-revelation of her sense of pride in being Iranian is an important chapter in her story.

Perhaps what sets these two works apart is the sincerity of Persepolis when viewed against the emotional manipulation of The Book Thief. I felt there was more emotion and truth in one single panel of Persepolis than in all of The Book Thief, and that truth is transported into its movie adaptation really well.

Released in 2007, the movie is a black-and-white animated adaptation, written and directed by the author herself. Voiced by Chiara Mastroianni and Catherine Deneuve in an Iranian-French coproduction, the movie is a fairly faithful adaptation of the graphic novel with tiny changes that don’t have a huge impact overall. The biggest change is the narrative framing: it opens and ends with Marji as an adult woman sitting at the airport and reminiscing about her life.

I thought both the novel and the movie to be truly illuminating and impactful: both as spotlight on the life of an Iranian woman and to the story of a nation. The movie allows for scenes to grow even more arresting than their counterpoints in the novel: the one where Marji goes travelling with her grandmother to the Caspian Sea, or the one where she visits the anonymous grave of her uncle by the prison walls, come to mind.

It is remarkable that these two stories with such similar backgrounds, goals and elements can stick their landing in such different ways.

TL;DR: Persepolis made the world feel wider and bigger to me, whereas The Book Thief made it smaller by virtue of its softening of a traumatic war. The former’s movie adaptation was not only faithful to the source but it also allowed for it to travel even wider.