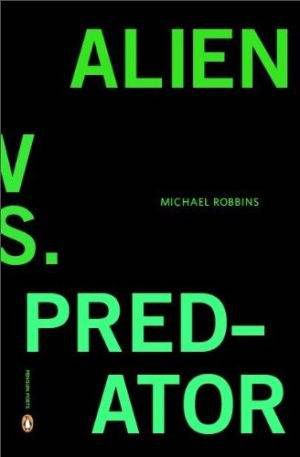 When it comes to poetry, timelessness is a red herring, or a white elephant, or some other distractingly burdensome creature. When I read poems, I’m not looking for verse that stands for the ages, whatever that might mean. I want unsettling rhythms, alien sounds, a sharp (and hopefully damned-weird) eye on the now.

So I’ve found Alien vs. Predator, a recent book of poetry by Michael Robbins, entirely thrilling. Robbins writes poems that draw on a rich literary past, sure. (“John Milton jumps out of my birthday cake;” “I’m not with you in Rockland, a fortiori.”) But also and even more, his poetry is  fantastically, ecstatically of the present, our present of shiny brands and celebrity gossip. Like Jell-O molds studded with carrot and cabbage, Robbins’ poems are speckled with words and names and sounds both intensely familiar and pleasurably alien. Words that surround us all the time (on billboards, in magazines, on screens, in whispers) but pull you up short, a bit smilingly stunned, in the context of a poem.

Words like these, all of which you can find in the disorienting, orgiastic, just-plain-peculiar Alien vs. Predator:

The book, in other words, is like an obstacle course riddled with the wreckage of American capitalism. (Or maybe like reading Howl while watching Keeping Up with the Kardashians.) And if that doesn’t scare you, then Alien v. Predator is definitely for you.