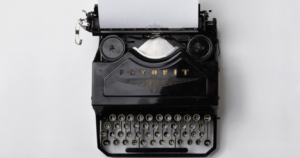 I was always a writer. By six I wrote picture books stapled together on colored paper. By nine I wrote my first story, and by twelve I had thirty pages of a novel saved on my parents’ old computer.

The first time I knew I could be a writer was when I saw the children’s book author Avi give a presentation in an elementary school gym. There, among the smell of old sweat, gym shoes, and whatever cologne custodians use to make a place smell like public school, Avi projected slides of his school papers. They bled with notes about sloppiness, laziness, messiness. They had bad grade after bad grade.

Like me, Avi has symptoms of dyslexia; his parents hid it so his teachers wouldn’t treat him like he was stupid. I am from a different generation than Avi, and while the stigma I experienced was by far less than Avi’s, it was the pain that we shared that stitched the memory of that screen onto my brain. Our shared experience of dyslexia was as vivid as climbing the ratlines on the ship in The True Confessions of Charlotte Doyle and as snarky as the porcupine in his novel Poppy.

By college, I understood I had dyslexia. I also made a pros and cons list on whether or not I was going to be a writer. The pros went on to the point that the cons seemed insignificant. I stopped paying attention to my other “more sensible” classes. (LIKE WHAT?) The list said too much, nothing else mattered.

As I have gotten older, I no longer need to fight my way through the education system. Instead, my challenge is to break free from the ideas that we “outgrow” our dyslexia once we are adults and that if we do have dyslexia, then we must be silent, choosing professions free from words.

Instead, the opposite has proven true. Reading is still hard, proofreading is still close to impossible, but words are the most important thing I have. The books I have read, or listened to or discussed are treasured bits of paper; I am not alone.

There are more of us dyslexic wordsmiths, all members of Avi’s Army. But unlike Dumbledore’s Army, our power is in our visibility. Dyslexia (DYSLEXIC?) writers include poets like Debris Stevenson, whose combination of poetry, dance, hip-hop, and advocacy continue to pull those up around her, or Anne Rice, famous for her vampires and images of the American South. Philip Shultz even won a Pulitzer Prize for his collection of poetry called Failure, about his father’s string of unsuccessful businesses. His next book was a memoir called My Dyslexia. I have listened to the audiobook of My Dyslexia over and over.

I have grown more and more open to the strange way words spin on the page. It is freeing most of the time, but there are moments where I sweat before sending something to an editor, my own set of bleeding pen marks hemorrhaging in my memory. Even so, my openness has also given me a strange gift, sometimes at readings or chatting with authors in other places. They will look at me with a sly smile and whisper in my ear, “You have dyslexia? Me, too.”

Looking for more on reading with dyslexia? Try How Reading Out Loud Almost Saved My Marriage or Dyslexia And Comics.