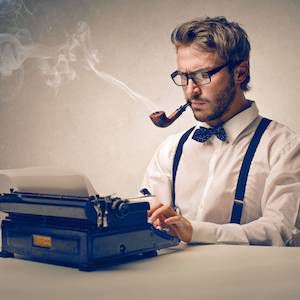 When I was a kid I imagined that writers had the most glamorous lives. Unlike pedestrian people like my parents who had to go to work at an office, writers spent every day creating and dreaming and inventing stories. They sat at big wooden desks in front of windows that let in summer sunlight year round, drinking tea and tapping out words at a brisk pace on an antique typewriter.

When they needed a break, I assumed that they had vast libraries of books to choose from and could just take an afternoon to read a book without a care in the world. I never imagined deadlines or writers block or paychecks or the pure torture that it can be to force words out of your brain and on to a page every day.

I still have a rather romantic notion of what it means to be an author. Although I know intellectually that there’s more to writing that being a vehicle for the muse, I still can’t help imagining that writers somehow lead a more glamorous life than I do, despite the fact that every memoir I’ve read about writers flips that notion upside down completely.

The best thing about writers who write about writing is writers who also write about their writer friends. When I recognize my favorite authors in the memoir of another writer, it makes me feel like I did when I was seven years old and would see my teachers at a grocery store; it’s disconcerting (but also sort of awesome) to see people you admire out of their natural habitat and inhabiting the habitat of someone else.

Two writers that recently came together in my brain through their memoirs are Ann Patchett and Elizabeth McCracken.

In her 2004 book on writing and friendship Truth & Beauty, Patchett told the story of her relationship with poet Lucy Grealy. Patchett and Grealy met at the Iowa Writer’s Workshop just out of college and remained fast friends. While Truth and Beauty is a beautiful tribute to Grealy, who died of a drug overdose in 2002, it’s also a look at what a writing life can look like – agents, pitches, teaching, fellowships and workshops, cobbled together to make a living pursuing art. Another dear friend mentioned throughout the book is McCracken, who met Patchett during a fellowship at the Fine Arts Workshop in Provincetown, and they also became fast friends.

I happened to have McCracken’s 2008 memoir, An Exact Replica of a Figment of My Imagination, on my shelf as well and, since I like bookish connections, I decided to read it immediately after Truth and Beauty. The book is about the death of McCracken’s first son, stillborn at nine months. While the book is less about writing, McCracken frequently mentions her friend, Ann, and how much help she was in the months following her son’s death. I wouldn’t have guessed that was Patchett had I not read Truth and Beauty. Knowing that detail made me feel like I was sneaking into some secret world where all writers know each other and are best friends forever.

McCracken didn’t use any last names for friends in her memoir, so I’m not sure if I can find another writing memoir and go for a trifecta of writers writing about their writer friends unless I get some help. Riot readers, what are some of your favorite memoirs by writers?