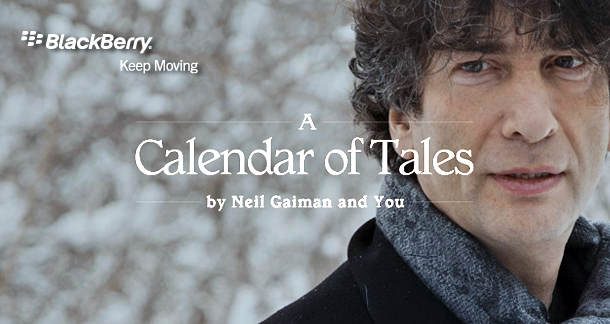 Keeping up with social media these days can be hard. And when I say “hard” I mean it as in, “Oh God, keeping track of people all over the world minute by minute through a mind-blowing series of wires and tubes and code is so stressful!” as opposed to a, “Working three jobs to keep food on the table for my children is stressful” sort of way. Just so we’re clear. But still, it’s hard!

So when I saw a most ridiculous number of retweets on my Twitter feed from Neil Gaiman a month or so ago–like, even more so than Neil’s usual–my eyes sort of glazed over them rather quickly, even though I had a vague sense that there was something heart-tugging and sincere about all of them. Even more reason to scroll; I just wanted to read what my friends had for breakfast, okay; who has time for strangers making you cry?

But as I’ve seen more things pop up about this Mysterious New Neil Gaiman Project Thing recently, I decided it was time to sit down and figure out what the hell was going on. And what the hell is going on turns out to be sort of complicated, but also fascinating.

First things first, it’s sponsored by Blackberry, so we can get the corporate ties right out in the open. It’s a campaign called Keep Moving, which makes me think about Michelle Obama trying to get kids to exercise with Beyonce, but I guess it’s different. Rather, this moving-themed campaign focuses on technology and interconnectivity and pretending Blackberry is still relevant.

Gaiman, Alicia Keys, and Robert Rodriguez were invited to start artistic projects highlighting fan involvement, and Gaiman took to Twitter, asking people questions about months of the year. Things such as, “Why is January so dangerous?,” and “What would you burn in November?,” to the most poetic, “If August could speak, what would it say?”

The responses poured in, with people sharing the heartbreaks and joys from different months of their years, all in 140 characters or fewer, hence the retweets I callously ignored. Gaiman chose one response for each month and wrote a short (real short) story inspired by each one, which you can now read online in the aptly named, “A Calendar of Tales.” To add on to all this, fans were then also encouraged to submit their own artwork inspired by the short stories on the Keep Moving website. And if that wasn’t enough media for you, there are also videos of Neil throughout this whole creative process, for all the can’t-get-enough-of-Neil’s-charmingly-craggy-face folks out there.

So here’s the question: Is this unbelievably cool and innovative? Or is it simply, as the AV Club called it, “a dizzying cycle of mutual promotion and self-promotion?” Can it be both?

Fandom is a more sprawling, often intimate, force now than it ever has been before in every variety of the arts, including books. I used to know authors simply by, you know, what books they wrote; I now gauge a lot of them in my head unwittingly by their social media personalities. And sometimes they reblog the same things I reblog; sometimes they follow me back; and they become weirdly closer, somehow, to That Guy I Went to High School With, as opposed to The All Mysterious Author. Essentially: the fourth wall has already been broken.

So does authors reaching out to fans enrich the literary world? Or does it cheapen it?

Alternately, does a corporate-sponsored, preconceived interactive project still count as “reaching out”?

The one thing that’s still uncertain to me with this Calendar of Tales project is if anything will be done with all the fan artwork that’s submitted, but it doesn’t sound like there will necessarily be any sort of prize or compensation for any of it. (The last day to submit your artwork is Monday, March 11th.) I think it really may just be a blob of things, collectively and loosely created via the inspiration of one writer by the people who in turn inspired him, all existing in an intangible space made of wires and tubes and code, just to exist. I don’t know if that really changes the world or anything, but I think it’s safe to call it pretty cool, and maybe even fun. And especially in a medium that doesn’t get so described very often, fun ain’t bad