On January 15, 2017, I attended the first of what would become many marches and protests taking place before, around, and after the inauguration of our newest president. 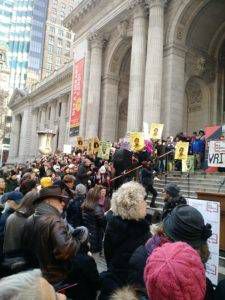 The event, #WritersResist: Write Our Democracy, was co-sponsored by PEN America, and took place on Martin Luther King Day, in preparation for the inauguration which was going to take place just a few days after.

Write Our Democracy (formerly Writers Resist) was started by Erin Belieu, poet and co-founder of VIDA, as a way to organize various events around the country and world. Over 100 Writers Resist events occurred on January 15, 2017, with the flagship event taking place in front of the famous steps of the New York Public Library. 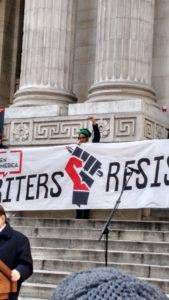 The website lists the following as its essential credo:

“To best protect and defend against further erosion of social justice and democratic process, we believe there are three essential arenas in which writers can best exert influence and inspiration. We must:

In days to come, the website promises to include more resources, beyond those originally posted to help organize Martin Luther King Day events (though those guidelines are useful in planning almost any resistance event, and are definitely still useful).

I spoke to Lyz Lenz, Managing Editor for The Rumpus, who organized a Write Our Democracy event along with a friend in Cedar Rapids, IA. Both heard of the organization online, through Facebook. “I had wanted to put something like Writers Resist [now Write Our Democracy] together in my town before the election,” Lenz wrote me, “but I didn’t have enough street cred, organizational skills, or pull to get it off the ground.” Once she was connected to Write Our Democracy, however, she said it was powerful to know that she wasn’t toiling alone. “That same day, I held our Cedar Rapids event, [and] we were joined with writers all over the nation, together raising our voices.”

The power of our collective voices is clear. As many of us have found, talking to our fellow artists and writers helps with communication of events, protests, and outlets, as well as simply venting our frustrations. Lenz said, “my advice to writers is to put your ear to the ground and listen and see what else is going on and plug yourself into it. There are so many good organizations and groups out there that are dying for help. But they have the knowledge, skills, and resources to help you. Either way, don’t go it alone. We are a community and the more united our voices are, the more success we will have.”

Lenz’s advice dovetails nicely with the idea that I’ve seen shared on Facebook by various activists: don’t reinvent the wheel. There are plenty of organizations out there already who are doing amazing work and need all hands on deck. Join existing movements, help out as you can, and continue to write, read, and stay educated.

While researching Write Our Democracy, I also discovered a fantastic outlet that had the name Writers Resist first (and the reason that Write Our Democracy is not longer called Writers Resist). The original Writers Resist is, according to Prose Editor K-B Gressitt, “an online journal [dedicated to] creative expressions of resistance. We will continue to do this, and we’re delighted to be receiving submissions from throughout the U.S. and, increasingly, around the globe. The arts–in particular creative writing–are a fabulous tool for movement building.” This is a wonderful publication to watch out for and take note of.

In the weeks and months to come, we’re going to continue needing to organize and take part. I encourage us all to remember that we work better together than alone, and that our strength is in our ability to organize together in the face of the bias and bigotry we’re already seeing before us day after day.